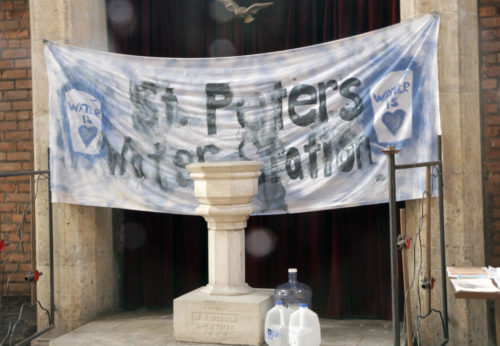 [Episcopal News Service – Detroit, Michigan] On any given day, some 10,000 Detroit residents, the majority elderly women and single mothers, turn on a dry tap.

It’s a persistent water crisis that has attracted international attention and condemnation amidst coverage of Detroit’s post-bankruptcy odyssey from ruin to rebirth as a city for investors, entrepreneurs, artists and creative types.

For more than a year, at the same time trendy restaurants opened, competition increased for downtown lofts and apartments, and construction began on a public-private $137 million light rail train stretching three miles along Woodward Avenue, the city’s poorest residents have faced water shutoffs.

“This is abject poverty, these are people who’ve had their food stamps and welfare cut, the elderly and women with children,” said Lindsay Airey, a staff member at St. Peter’s Episcopal Church in Corktown and a We The People of Detroit volunteer. “Of the people [to] whom we’ve delivered, at least 75 percent have children, and then probably the rest are elderly women.

“They call our hotline and we try to help them until their case is resolved. We had one woman, a 17-year-old who had a child, and then we didn’t hear from her anymore because she got evicted. She was just trying to go to high school.”

In the rear of St. Peter’s sanctuary behind the baptismal font hangs a white sheet with bleeding black letters reading, “St. Peter’s Water Station”; under it sits 7 gallons of water, two 1-gallon jugs and one 5-gallon jug, all that remains of a 1,500-gallon donation.

“We’re out of water,” said the Rev. Bill Wylie-Kellermann, pastor-in-charge of St. Peter’s, adding the church has been waiting on a 2,500- to 3,000-gallon donation.

St. Peter’s has served as a water station, storing water and making weekly deliveries to disconnected residents. A single person might receive 8 to 10 gallons a week, a family with two or three members, 20 to 25 gallons, and a seven- or-eight member family, 35 to 40 gallons, said Airey, in a conversation with Episcopal News Service in the sanctuary.

“We’re at a crossroads,” she said. “We don’t want to have to ask for corporate donations.”

Previous water donations have come from the Council of Canadians, a social action agency, and the West Virginia-based Keeper of the Mountains Foundation.

Historically, St. Peter’s Episcopal Church has served as a base for social justice advocacy, a tradition Wylie-Kellermann continues. As business innovation and technology hubs popped up downtown, St. Peter’s invested in its building.

“We turned the parish hall into a beehive of social justice – and some nonprofit organizations rent it, that’s how we pay the heat bill – all kinds of things have started in there and funded the parish,” said Wylie-Kellermann, a Jesuit-influenced United Methodist, who has served St. Peter’s for eight years.

“In the case of We the People, we raised some money to give it to them for 18 months. If we were doing market rate, what you could do in Corktown, we’d be flush.”

St. Peter’s sits at the southeast corner of Michigan and Trumbull, kitty-corner from a 10-acre vacant lot where the Detroit Tigers played for 90 years. The church sits practically at the center of Corktown, named for the Cork County immigrants who fled Ireland during the mid-1800s’ potato famine. Like trendy Midtown, Corktown, a diverse, mixed-income neighborhood home to artists and die-hard Detroiters, is hip.

“For many years, our friends at St. Peter’s have expressed how they regard social justice through their actions,” said Rick Schulte, director of communications for the Diocese of Michigan. “This is a church that opens its doors every single day and serves its Corktown community, knowing the needs and issues that are important to all who call St. Peter’s home. Their ability to mobilize and respond to a need or situation has always been very impressive.” 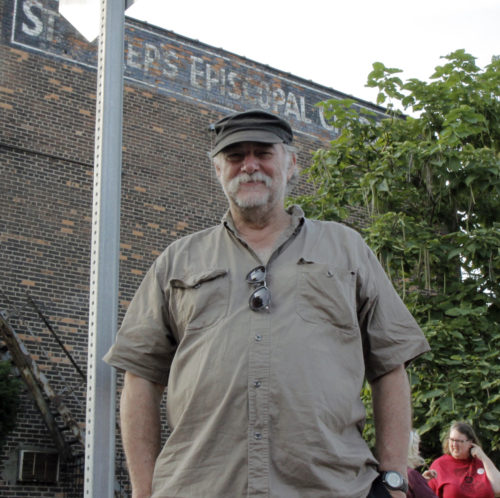 Before becoming pastor-in-charge, Wylie-Kellermann was a peacekeeper at St. Peter’s soup kitchen, while commuting to Chicago to direct an urban ministry for SCUPE, or the Seminary Consortium for Urban Pastoral Education. His wife, the late Jeanie Wylie, daughter of late Northern Michigan Bishop Samuel J. Wylie, once edited The Witness, a progressive Episcopal magazine that folded in 2006.

Arrested more than 50 times for civil disobedience, Wylie-Kellermann was among eight people taken into custody in July 2014 while attempting to block the gate of the private trucking company contracted to perform the water shutoffs.

From the back of a police car, Wylie-Kellermann told the Detroit Free Press, “We’re here to appeal to the workers to stop shutting off the water.”

During an interview over coffee and a bowl of Motor City chili at Onassis Coney Island, across Trumbull Avenue from the church, Wylie-Kellermann, himself a preacher’s son, told the story of one summer day in 1967, the year he graduated from the former Cooley High School.

“In July, I was in northwest Detroit and I remember looking down Grand River – I feel like I was standing in the middle of the street, although I don’t know if that can be true – and saw the smoke rising from the city,” he said, adding he’d written his senior term paper on civil disobedience.

“I was reading Letter From a Birmingham Jail that spring, in April, and Dr. King was at Riverside Church, that’s what I was reading as the smoke was rising.

“The other person I was reading was [William] Stringfellow – he wrote a book for adolescents called ‘Instead of Death’ – between Stringfellow and Martin Luther King, I kind of understood it as a rebellion on the spot. And my vocation to pastoral ministry passes through that, I saw the smoke and my heart just kinda pierced,” he said, clearing his throat. “I feel like I have a place-based vocation. Detroit is inseparable from my calling, kind of like monks that take a vow of stability.”

In 1967, Detroit residents revolted against high rates of unemployment in the African-American community, segregated schools and housing, in what some call a “riot” and others a “rebellion.” In the decades since the city’s white population disembarked for the suburbs and the city’s industrial base went the way of the rest of the Rust Belt.

When asked if he were surprised about Detroit’s water crisis, that nothing is resolved despite widespread media coverage and condemnation, Wylie-Kellermann responded, “Yeah, it’s a tough nut.”

Yet some say it’s a water crisis that portends a more extensive fight for water rights that already has spread to Baltimore, Maryland.

In Detroit, the crisis dates back to 2005 when the Detroit Water and Sewerage Department began large-scale residential water shutoffs affecting 10,000 customers who were behind or unable to pay their water bills. At the time, a proactive affordable-rate plan was proposed but never passed. Over the next 10 years, the city’s water rates increased by 119 percent. By spring and summer of 2014, 3,000 households a week up to a total of 30,000 had their water turned off.

In July 2014, more than 1,000 people wearing T-shirts and carrying signs reading “Water is a Human Right” gathered in downtown Detroit in protest of the shutoffs.

At the time, the Wall Street Journal reported that 80,000 past-due residential accounts owed $43 million, with the average past-due bill $540.

Residents who’ve fallen two months behind on their water bills sign on to payment plans only to find themselves falling again into arrears; other residents have found a way to exist without water, relying on neighbors, water stations and deliveries, moving in with family members or leaving Detroit altogether, said Airey.

“Lots of people (lose) their homes ultimately because it (the water bill) gets tacked onto their taxes. So with the hotline, we connect them to emergency water but also help to try to navigate the assistance programs that are out there,” said Airey, estimating that some 500 people have called the hotline.

Forty percent of Detroit’s 700,000 residents live below the poverty line. The city was once the fourth largest in the country, but since the 1950s has lost more than 60 percent of its residents. Outside the core downtown area, Detroit’s 140 square miles is home to abandoned factories, banks, storefronts and houses – sometimes blocks and blocks of houses – and almost a third of it is vacant land.

“Detroit used to be a city of 2 million people and now it’s 700,000. So from one perspective, we have this spread-out infrastructure – how are we going to reorganize people? – and the way (the city has decided) to do that is privilege certain neighborhoods with resources and services, and pull the plug on others,” said Wylie-Kellermann.

Airey and others affiliated with the church and We The People of Detroit are preparing again to canvass neighborhoods, going door-to-door to campaign to identify households without water. Previous canvassing campaigns revealed residents’ shame.

“The door-to-door tells us that people are ashamed. They’ve silenced themselves,” she said. “They themselves buy into what the media says about it being their fault and they should just pay their bills. I remember when we were canvassing in the fall (2014) people who clearly had blue lines marked on their sidewalk – some would tell us, ‘Oh, no, our water’s not shut off, we pay our bills’ – so that’s part of the battle.

“Monica’s constant refrain is, ‘It’s not our fault but it is our fight.’ Getting people to believe that is the hard part.”

“Monica” is Monica Lewis-Patrick, the co-founder of We The People of Detroit, a community activist and organizer who has been involved with Detroit’s water fight since the beginning.

When We The People formed in 2008 as a grassroots movement to train and mobilize Detroit residents to improve their quality of life, it received help from the Presbyterian Church USA.

A year after a state-appointed emergency manager took over the day-to-day operations of the city and nine months after Detroit became the largest municipality in U.S. history to file bankruptcy, the Detroit Water and Sewerage Department in March 2014 adopted “a more aggressive approach to debt collection,” in a move that was declared by the United Nations as a violation of international human rights.

On Dec. 10, 2014, when Detroit formally emerged from bankruptcy protection, its mayor, in a news conference covered by mainstream media including The New York Times, posed a difficult question: “How do you deliver service in a city where the unemployment rate is double the state average, and we’ve got to rebuild a water system and a bus system and a computer system and a financial system?” Mayor Mike Duggan asked. “It’s all going to be a challenge.”

– Lynette Wilson is an editor/reporter for Episcopal News Service