Sauls announced that the redevelopment is Block 87: The Trinity Block, a full city block located at 7th and Trinity streets that was purchased in 2009 by the Domestic and Foreign Missionary Society – the name under which The Episcopal Church is incorporated, conducts business, and carries out mission – as a potential site for the Archives of The Episcopal Church.

The property, currently an income-generating parking lot, has the potential for more than 600,000 developable square feet, and is located on the border of the financial district and the Sixth Street Historic District, near St. David’s Episcopal Church, one of the oldest buildings in the city.

“The Episcopal Church has been part of Texas and of Austin since its beginning,” said Sauls, in the press release. “We are particularly excited to be part of Austin’s development for the common good of this community for many reasons, including the fact that our next General Convention, our highest governing body, will meet in Austin in July 2018.  We are committed to this development being a benefit to all segments of the community and something of which Austin will be proud.” 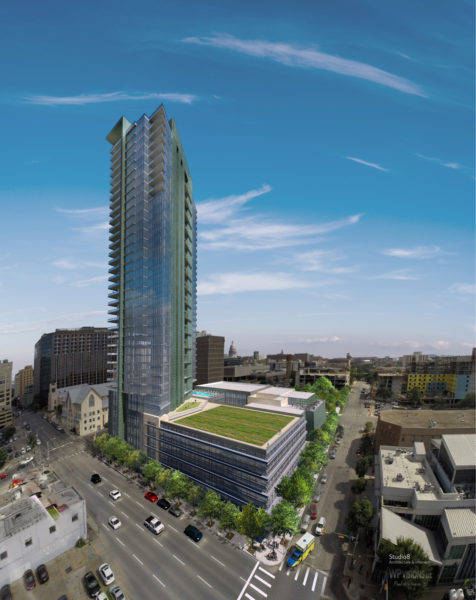 The Episcopal Church has worked with Studio8 architects on a vision for the property and is soliciting development partners to construct this or another creative design, including a space for the Archives of The Episcopal Church. Rendering: Studio8

Plans call for the development of the land with a partner for office, residential, and retail uses along with a new Archives of The Episcopal Church, which are currently housed at the Seminary of the Southwest, a space the collection has long outgrown, Sauls said.

Austin, the state’s capital with a population of 912,791, is the fastest growing big city in the country, home to the University of Texas Longhorns, Austin City Limits, and the popular SXSW music festival. The city’s unofficial slogan is “Keep Austin Weird”.

Located 165 miles slightly northwest of Houston, Austin also is part of the Episcopal Diocese of Texas.

“We are thrilled that The Episcopal Church has made plans to develop property in Austin for a permanent home for the church’s archives,” said Texas Bishop C. Andrew Doyle, in the press release. “This will insure a secure location for these historic documents in a setting that will welcome scholars to both build and access the church’s history for generations to come.”

The Episcopal Church will be represented by the Rev. Canon Lang Lowrey III as asset manager, and Clinton Sayers II and Paul Byars, real estate brokers with Austin-based Sayers and Associates.

“We welcome proposals from those in the development community who appreciate that the path to The Episcopal Church’s archives must come out of this transaction,” said Lowery in the press release.

“This property sits at the crux of three distinct districts: Austin’s creative scene with the Red River District and East Austin, it’s burgeoning medical district to the north and the tech and hospitality anchors downtown already provides,” he added.

“We believe that the Trinity Block promises the largest development opportunity in downtown. And given that there are so many different uses that could do well at this location – from the large, modern floor plan in office buildings to micro-units for residences – we are excited to work with prospective partners to develop this site.”