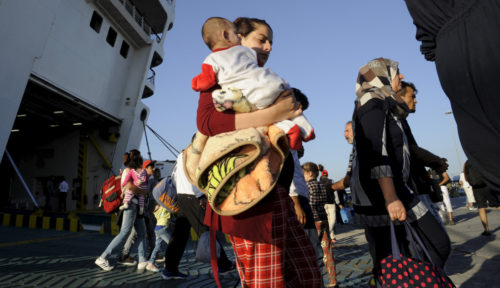 Syrian refugees and migrants disembark the Eleftherios Venizelos passenger ship at the port of Piraeus, near Athens, Greece, September 14, 2015. Of the record total of 432,761 refugees and migrants making the perilous journey across the Mediterranean to Europe so far this year, an estimated 309,000 people had arrived by sea in Greece, the International Organization for Migration (IMO) said on Friday. About half of those crossing the Mediterranean are Syrians fleeing civil war, according to the United Nations refugee agency. REUTERS/Michalis Karagiannis

The children of Abraham have ever been reminded to care for the widow and orphan and the sojourner in their midst, who were the refugees and homeless of the time. Jesus charged his followers to care for the least of these and proclaim the near presence of the Reign of God – in other words, feed the hungry, water the thirsty, house the homeless, heal the sick, and liberate the captives. We cannot ignore the massive human suffering in Europe, Africa, and the Middle East, nor in Asia and the Americas. We are our brothers’ and sisters’ keepers, and our lives are bound up with theirs. The churchwide ministry of Episcopalians has included refugee resettlement since the refugee crisis of World War II.  It continues today through the leadership of Episcopal Migration Ministries, and I urge your involvement, action, and support. Read about their work below, and share these opportunities with friends and co-workers. You will discover anew the power of good news in the face of the world’s tragedies.

The Syrian Civil War, now in its fourth year, has unleashed a humanitarian emergency in which severe war crimes — including indiscriminate massacres, persecution of religious and ethnic minorities, sexual and gender-based violence, and other humanitarian abuses — have become widespread.   According to a recent UNHCR report, more than 4 million people (through the end of 2014) have fled their homes to escape the war in Syria, adding to a worldwide total of nearly 20 million refugees, half of whom are children.  This is the largest and most widespread refugee crisis the world has known since World War II.

While record numbers of people are being forced to flee, powerful images of refugees fleeing Syria are compelling the world to action.

Learn
The media is publishing articles on a daily basis chronicling the most recent events and statistics. This crisis is complex geopolitically and historically (see here). The terminology  can also be confusing. Follow Episcopal Migration Ministries on Facebook and Twitter to stay up to date.

Act
In 2015, the United States is welcoming 70,000 refugees to our country as new Americans.

The Domestic and Foreign Missionary Society, through Episcopal Migration Ministries, works in partnership with its affiliate network, along with dioceses, faith communities and volunteers, to welcome refugees from conflict zones across the globe. Your local resettlement agency is always preparing for arriving families and in need of financial support, resources and volunteers. Contact an Episcopal Migration Ministries affiliate near you.

Advocate
As a global leader in refugee resettlement, the US can and must do all that it can to welcome Syrians to the United States. Reach out to your Senators, Representatives, and the White House and ask them to support a robust refugee resettlement program and significant increase in Syrian resettlement.

The Episcopal Public Policy Network (EPPN) has written a sample letter you may send to your members of Congress urging them to support increasing the number of refugees resettled by the US in 2016. You can find this letter on the EPPN action center here.

If you’re a teacher, use UNHCR’s toolkit  for teaching young people about migration and refugees.

If you are in a congregation, use the Prayer for Syria  as part of your Sunday or daily worship.

For additional information, contact Allison Duvall, Manager for Church Relations and Engagement for the Domestic and Foreign Missionary Society, 212-716-6027, aduvall@episcopalchurch.org.