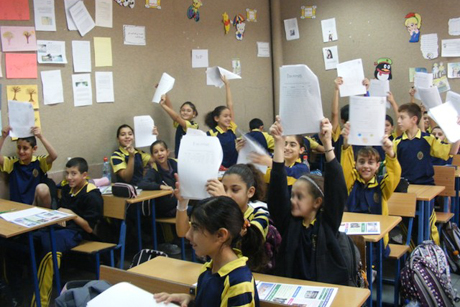 [Anglican Communion News Service] Arab Israeli schools last week joined a “strike” in solidarity with Christian schools in Israel that have remained closed from the start of the new academic year in protest at what the Christian school leaders are describing as discriminatory funding cuts.

Archbishop Suheil Dawani of the Episcopal Diocese of Jerusalem met teachers and staff of the diocese’s Christ’s Episcopal School in Nazareth to welcome them to the start of the new academic year and to introduce the school’s new director general, Archdeacon Samuel Barhoum.

But, while the school’s teachers and staff were present, the school children were absent. The school, along with 46 other Christian schools in the country, has not been able to open following severe cuts to their budget by the Ministry of Education.

Christian schools in the country are “recognized but unofficial.” The diocese says that the education ministry cut the budget for Christian schools by 55 percent in 2014 and 71 percent this year.

“The school is unable to operate on 29 percent of its funds,” the diocese said, as it joined other Christian schools in Israel in strikes that began on Sept. 1 to protest the cuts. “These will not cease until funding is back in place.”

The Jerusalem Post, quoting Jafar Farah, director of the Mossawa Centre, an advocacy organization for Arab citizens in Israel, said that the about 90 percent of Arab schools in the country have joined the strike in solidarity with the Christian schools, despite pressure from the education ministry to remain open.

Christian schools are among the oldest in Israel – with some having histories dating back more than 400 years. The sector also achieves some of the best results of all schools in Israel. The country’s official statistics office shows that 69 percent of pupils at Christian schools enroll in college or university at the end of their studies compared with 61 percent of schools in the Jewish sector and 50 percent in the Muslim sector.

The education ministry says that there has been no cuts to the Christian schools network in the current academic year or the year before it, and that “they are funded in an equal manner to other recognized but unofficial institutions in the State of Israel,” according to the Jerusalem Post.

But Father Abdul Massih Fahim, director general of the Christian schools network, told the paper that the ministry’s claim that it is still providing the requisite 75 percent funding is “technically correct, but only because the ministry has consistently reduced the standard number of allocated teaching hours in the sector from 1.1 hours per student in the 2003-04 school year to 0.66 hours per student for the current year.”

He said that the education ministry had suggested that Christian schools should be turned into state-run schools, with the churches losing responsibility for them; or for them to become special schools, charging fees of up to ₪7,000 NIS (UK£1,175 or US$1,805) per child per year.

Last week, in a joint statement, a number of leading Arab Israeli academics said: “Many of our private schools have existed for decades, long time before the establishment of the state of Israel, and have diligently raised up and taught hundreds of thousands of women and men coming from all sectors and religions comprising the Arab society in Israel.

On their website, the Diocese of Jerusalem says: “Please pray for the staff, teachers and children at Christ’s Episcopal School, Nazareth and for Archdeacon Samuel as he embarks on this important new ministry.”