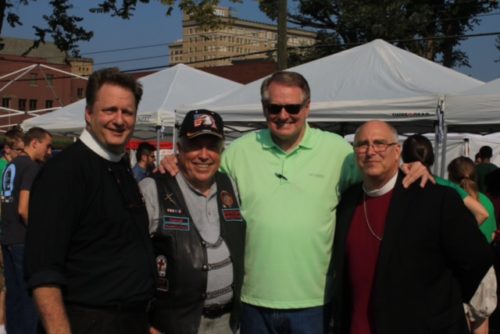 [Episcopal News Service] “It takes a village” is an adage often associated with child rearing, but when it comes to addressing poverty, homelessness, drug addiction, crime and other societal problems communities face, it’s an applicable truism.

In Huntington, West Virginia, for instance, a small city with a population of 50,000 people – 30 percent living below the poverty line – the village has been gaining strength through a fledgling community initiative introduced by the Rev. Chip Graves, rector of Trinity Episcopal Church in downtown Huntington.

By stepping outside Trinity’s walls and forging ecumenical and interfaith alliances and partnering with local nonprofit organizations and the city, Graves and others are talking seriously about the challenges facing Huntington and coming together to address needs and alleviate suffering.

“What we are doing at Trinity Church, it’s unique – but it’s not something that others haven’t tried,” said Graves, in a telephone interview with Episcopal News Service.

One thing that sets Metro Theology apart, however, is strong support from Huntington Mayor Steve Williams and the city’s diverse, active faith community.

“The fabric of faith in Huntington defines our community and certainly we respect the separation of church and state, but just because the institutions are separate, I don’t think you can separate faith from who the person is,” said Williams in a telephone interview with ENS.

“The diversity of faith does spread into the public square and it’s more often than not you have individuals who are active in their faith if they are not vocal in their faith,” he said. “Why it works in Huntington is that it’s such a part of us that it doesn’t create animosity, it’s the prism through which we all observe life.”

Raised Baptist and married to a cradle Episcopalian, Williams is a self-described “Baptipalian,” who in addition to being a parishioner at Trinity also attends nearby Fifth Avenue Baptist Church.

One thing Williams has attempted to do while in office is to use each individual’s connection to faith to “lift ourselves up to enable our citizens to reach their fullest potential.”

Over the past six months Metro Theology has come to embody that sentiment.

A “logical extension of asset-based community development,” as described on its website, Metro Theology uses the same ABCD methodology that engages communities at a grassroots level to recognize local assets – people, buildings, relationships and even faith – to envision new ministries and meet local challenges.

Like many cities in and around the Rust Belt and Appalachia, Huntington – once a center for the coal and steel industries – has lost almost half its population and most of its high-paying manufacturing jobs. Today, Marshall University and the city’s two hospitals, which were recently cleared for a merger, are its largest employers.

Huntington is a hub, connecting West Virginia, Ohio and Kentucky; it’s also one of the primary markets for drug trafficking in Appalachia.

In August 2014, Huntington Mayor Williams made an impassioned plea, in a video that went viral on YouTube, calling on churches in the tri-state area to come together Sept. 7 in prayer for the recovery of those fighting substance abuse and their healing; the protection of law enforcement officers “who battle the scourge on a day-to-day basis”; and the drug dealers so that they can find a way to walk away from a life that preys upon the weaknesses of others.

Huntington’s 30 percent poverty rate also makes it the poorest place in West Virginia, where the statewide poverty rate is just under 18 percent.

“Where there are higher levels of poverty, you’ll have an issue with drugs,” said Laura Gilliam, executive director of the United Way of the River Cities, Inc.

Over the last year or two Huntington experienced an increase in drug addiction, overdoses and drug related crime, first attributed to the abuse of prescription drugs and more recently heroin.

“In January we began to see heroin overdoses and deaths far beyond anything the community has encountered,” said Gilliam. “When we got a handle on the prescription-drug problem, cut off the source, they had to turn to something else. Heroin is not like regulated OxyContin that’s not cut with anything. (When addicts) get it and if it’s mixed with something bad … that’s been why we’ve seen such a rise in heroin overdoses.”

In the first three months of 2015 Cabell County reported 134 drug overdoses, 18 of them fatal, and the majority of them were in Huntington, according to a press release from the mayor’s office announcing a holistic plan to address the city’s drug epidemic. On Sept. 1, the health department announced a needle-exchange program aimed at stopping the spread of diseases like HIV and hepatitis B and C that are spread by addicts sharing contaminated needles.

Recovery counselors and service providers citing more recent figures put the rate of overdoses and overdose deaths in the Huntington area at several times the national average, with 474 overdoses, 34 that were fatal, in the first six months of 2015.

The United Way began bringing community members and stakeholders together to talk about challenges including drug addiction in April and May and has continued that conversation on a monthly basis.

Graves participated in these informal meetings, and on Sept. 12, Trinity is joining with 50 other churches, the United Way and various recovery centers and programs in sponsoring an addiction freedom event, a one-stop-shop for those in need of recovery services.

Such events and partnerships embody Metro Theology, which grew organically out of networking and relationships with parishioners and community members serving people living on the margins in Huntington.

In addition to working on issues of drug addiction, Trinity hosts events and partners with others to address poverty and related challenges of employment, health, education and nutrition. Graves also provides one-on-one counseling for job seekers, and then refers them to Goodwill or other job-service providers.

Like many Episcopal churches, Trinity hosts a weekly meal on Wednesday nights called “The Gathering” that draws about 120 people. A couple of years ago, Trinity began hosting River Cities, a feeding ministry that began more than a decade ago on the banks of the Ohio River with the longtime support of Larry Clark, who now serves on Trinity’s vestry.

The ministry, Clark said, started with two people passing out coffee and donuts to the homeless and now serves an average 275 people every Saturday.

“We serve anyone who is in need … we give away toilet paper, oranges, dishwashing liquid, deodorant, as well as serve breakfast, eggs and biscuits and gravy. There’s a lot that is donated to us from the food bank. We give away water. It has grown to the point that there is quite a bit involved; Trinity has amazed me, they’ve really rolled up their sleeves and embraced people from other churches coming in and helping us.”

Additionally, River Cities receives support from Marshall University which sponsors a monthly medical clinic at the church, where people in need of health and medical services, including ophthalmology and dermatology, are treated by medical students and attending physicians.

Even with the existence of a public health system, medical outreach is important because many people who maybe haven’t showered in three days or suffer from mental illness don’t feel comfortable walking into a doctor’s office, said Missy Browning, a volunteer and the coordinator for Marshall Medical Outreach.

“The whole Metro Theology concept that Chip is working toward lets go of territorial responses and encourages people to work together,” said Lisa Graves. “Get out and serve the mission, without all those things you think about when running a church.”

Although growing his church hasn’t been the goal of Graves’ community outreach and community involvement, it has been a natural outgrowth of expanding the church’s ministries. Trinity also provides space for arts and drama.

Before Graves arrived at Trinity three years ago, the parish didn’t get too involved in matters outside the church. They ran a food and clothing pantry, but beyond that members kept themselves to themselves. During Graves’ tenure that has changed and the church has doubled in size and financial support.

It hasn’t been easy in West Virginia “where even the best Democrats are Republicans in disguise,” said Graves. It’s also not easy for white, educated people to be welcoming to people outside their community, but he says that in Trinity’s case it’s been mostly positive.

Graves hopes others will be inspired to model Metro Theology in their own parishes and communities. Click here for more information. The Rev. Chip Graves can be reached at therevchipgraves@gmail.com.