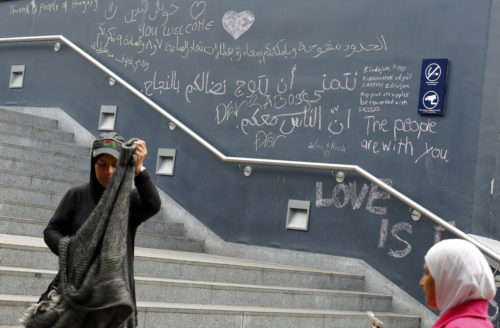 [Anglican Communion News Service] Saint Margaret’s Anglican Episcopal Church in Budapest, Hungary, part of the Church of England’s Diocese in Europe, is on the front line of the Syrian refugee crisis, with tens of thousands of asylum seekers passing through the city each day en route to Germany via Austria. The German authorities have announced that anybody fleeing the conflict in Syria who reaches Berlin will be granted refugee status.

At the weekend, members of the parish gathered at the city’s Keleti International Train Station to prepare and distribute aid packets to the refugees. “There were about 25 to 30 of us in all, everyone was enthusiastic and eager to help”, the Rev. Frank Hegedűs, the local chaplain and area dean, and a priest of the Diocese of Los Angeles, said in a report on the Diocese in Europe’s website. “We felt that such simple things could make the biggest difference in the short term, although we also knew that much more would need to be done over the coming days and weeks.” 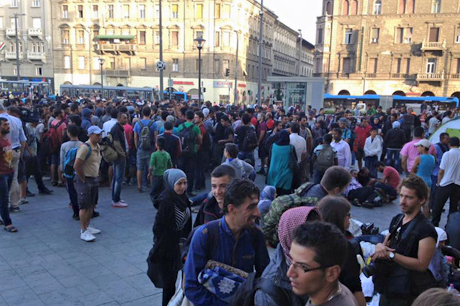 Another Anglican priest, the Rev. Andy Oatridge, was also assisting refugees at the station, and said that they were “lost in no-man’s-land.” He told BBC News: “They are caught between a rock and a hard place. They don’t understand what the government is doing. The government is trying to do all that it can here in Hungary but it can’t work without the co-operation of the other European Union states.

“Hungarians are doing what they can. The Hungarian volunteers are brilliant. Just to see the number of people volunteering is just quite moving; but it is chaos. It is crazy.”

The volunteers from Saint Margaret’s Church put together about 130 food parcels containing fruit, nutrition bars, water, toiletries, and hygiene items, as well as a total of 400 kilos of apples donated from a member of the congregation’s orchard.

“Keleti is not unlike any major train station in Europe – always bustling,” Hegedűs said. “On this occasion, the plaza in front of the station – as well as the modern underground transportation level – was filled with arriving refugees, mainly from Syria but also Afghanistan and other lands. . . The refugees appeared well dressed and groomed, though also obviously exhausted from their journey. Several reported being Christian.

“The language barrier was sadly formidable, but there was absolutely no sign of violence or disturbance anywhere. Police presence was minimal and respectful.

“The Saint Margaret’s team targeted mainly the many family groups in the distribution of their packets. Children and young families were everywhere. The volunteer team from Saint Margaret’s was by no means alone in its efforts. This part of the story has been underreported in the media. In some areas of the station there were nearly as many local volunteers as refugees.”

In London, Archbishop of Canterbury Justin Welby used his position in the House of Lords, the upper House of Parliament, to question the British government’s announcement that they would bring in 20,000 of the most vulnerable refugees from the camps around Syria over the next five years. “I welcome warmly this start in the response of domestic hospitality, which comes in addition to the very considerable work that we have done overseas through the overseas aid budget and the work of the Royal Navy,” he said. 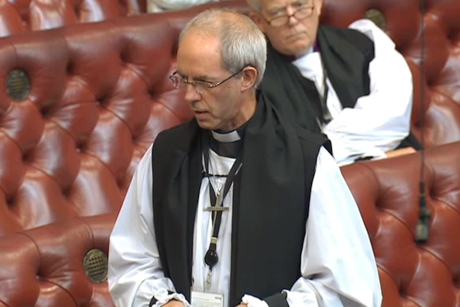 But, addressing Government minister Baroness Stowell of Beeston, who had repeated in the House of Lords the statement given by the Prime Minister in the House of Commons, Welby said: “Does the Noble Lady accept, however, that 20,000 is still a very slim response in comparison to the figures given by the UNHCR and the European Commission, and to the other needs we see; and that it is likely that it is going to have to rise over the next five years, unless of course the driver – which, I hope she also accepts, is local conditions in the camps – is dealt with significantly?

“And does she accept that within the camps there is significant intimidation and radicalization, and many particularly of the Christian population who have been forced to flee are unable to be in the camps? What is the government’s policy of reaching out to those who are not actually in the camps?”

In response, Stowell thanked the archbishop “for his leadership, and that of other faith leaders, over the last few days and the recent period while we have been observing such terrible scenes.”

She said: “We do not believe that this is just about providing refuge to individuals here in the United Kingdom; we must support people who are in and around Syria and are very much in need, and we have been doing that in a substantial way. . . As for the Christians being among those who are most in need because they are not receiving the support that others are, this is something for us to discuss with the UNHCR.

“It is important that when the UNHCR considers the criteria for those who are most vulnerable, those should include Christians who are not receiving the kind of support that others may receive.”

The bishops of the Church in Wales have issued a joint statement in which they appeal to churches to “show hospitality to strangers” and to help refugee agencies and charities welcome displaced families and individuals who have had to flee their homes with nothing.

Signed by Archbishop of Wales Barry Morgan, his assistant bishop, David Wilbourne, and the diocesan bishops of Swansea and Brecon, John Davies; St Asaph, Gregory Cameron; Bangor, Andy John; St Davids, Wyn Evans; and Monmouth, Richard Pain; the statement says that the bishops “have watched with horror and dismay the growing crisis involving refugees, and the number of deaths that have occurred of families and even young children as they flee war and persecution in the Middle East or Africa in the hope of finding a secure future in Europe.

“We recognize that the situation is complex and that there is no one easy answer to this situation.  We believe nonetheless that any and all responses should be characterized first by compassion and mercy; that efforts need to be redoubled to secure peace and justice in the troubled parts of the world, and that a generous but sustainable welcome must be offered to those most in need who seek a secure future among the prosperous nations of Europe.”

They have called on their congregations to join them in prayer “for all displaced and persecuted minorities and refugees” and also to demonstrate practical action, including donating to humanitarian work, organizing “welcome groups” for refugees who arrive in Welsh communities, collecting and distributing essential items to refugees, lobbying for “the UK to take its fair share of refugees and adequately resource initiative to help them” and for churches to assess whether they have any property which could be offered to agencies as suitable shelter or accommodation for refugees.

“We are grateful that Anglican congregations across Europe, alongside other churches, are offering hope and practical help to refugees, especially in Mediterranean countries,” the bishops say. “Christian Aid and others are at the forefront of life-saving action in war zones and refugee camps, whilst some church groups in Wales are already preparing to support new arrivals.”

They add: “We hope as well that particular attention will be paid to the Christian minorities of the Middle East, who are often the target of the most fierce persecution, and that their distinctive needs will not be overlooked.  We pray that the nations of Europe, and especially our own country, have the strength, courage and wisdom to respond generously and swiftly at this time of critical need.”

In Jordan, the Foundation for Relief and Reconciliation in the Middle East (FRRME), which was established by the Anglican priest Canon Andrew White, known as the Vicar of Baghdad, is helping Iraqi refugees find “food, a roof over their heads, and hope for the future”.

“Visiting with families in their temporary homes, we see first-hand the conditions they are forced to endure,” said FRRME Relief Workers Richard and Christy Sherrod. “While it is better than living under the tyranny of ISIS, there is one thing to consider – most of these Iraqis are not used to this kind of life. They are educated and have worked hard to provide for their families. Many have built their own businesses and their own homes. They are engineers, doctors, lawyers and business owners who have enjoyed life with family and friends. To have all this taken away in the blink of an eye is a tragedy that takes faith and courage to overcome.

“One of our first projects in Jordan involved several families living in a church – Father Khalil of St Mary’s Catholic Church in Marka (a suburb of Amman) took them in after hearing they had been dropped off by the side of the road. Not knowing where to go, or what to do, these families found safety and comfort in Father Khalil’s church compound. As time went by, more families came to the church for refuge. Over time, the living space grew smaller and the time grew longer.

“FRRME has relocated several families from Father Khalil’s church to a home designed for community living in another area of Jordan. This building was brand new and ready for them to move in to. FRRME’s team on the ground furnished the building, arranged the move and, as a result, Iraqi refugee families can start to rebuild their shattered lives.”