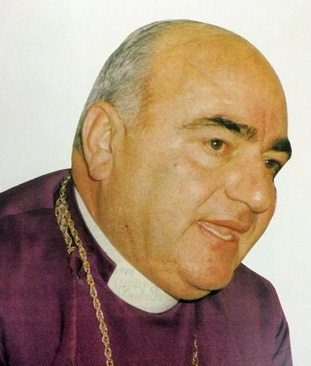 The Most Rev. Samir Hana Kafity, twelfth president-bishop and primate of Jerusalem and the Middle East. Photo: Diocese of San Diego

[Episcopal Diocese of San Diego] The Most Rev. Samir Hana Kafity, twelfth president-bishop and primate of Jerusalem and the Middle East, and bishop-in-residence at St. Bartholomew’s Episcopal Church in Poway, died on the afternoon of Aug. 21 at home after a stroke. He was 81 years old.

“Bishop Kafity kept a ball of barbed wire on his desk to help him remember that he was pastor to Christians on both sides of the barbed wire,” said the Rev. Mark McKone-Sweet, rector of St. Bartholomew’s, Poway, the parish home of Bishop Kafity and his family for the past eighteen years. “He gave himself relentlessly to bringing peace to all people, regardless of race, nationality, faith or political group, by breaking down differences and collaborating with countless religious leaders around the world.”

The Rt. Rev. James R. Mathes, bishop of the Episcopal Diocese of San Diego, said that when he arrived in this diocese over ten years ago as a new bishop, “it was a blessing to have a giant of the Anglican Communion present and active in our diocese.” Bishop Mathes joins “the Kafity family, the people of our diocese, the people of the Diocese of Jerusalem and the Middle East, and friends around the world in grieving the loss of Bishop Kafity; the church and the world are better because of his life and ministry.”

“Bishop Kafity was passionate for peace,” said the Rev. Canon John L. Peterson, Washington National Cathedral’s canon for global justice and reconciliation. “He was the Anglican Bishop in Jerusalem during two major political conflicts, the first Intifada and the first Gulf War. He firmly believed that the foundation stone of peace was always justice and his call for peace always centered around a just world for all people. One of Bishop Kafity’s great sayings was ‘we are all citizens of Jerusalem.’ Today we celebrate Bishop Kafity’s life among us as he becomes a citizen of the heavenly Jerusalem.”

Born September 21, 1933 in Haifa, Palestine to an Anglican family, Kafity was educated at the American University of Beirut and was ordained to the Anglican priesthood in 1958 at St. George’s Anglican Cathedral, Jerusalem. After ministering as parish priest there, he served at St. Andrew’s, Ramallaha; St. Peter’s, Bir Zeit; and All Saints, Beirut, where he served in the capacity of parish priest and archdeacon. In 1976 he returned to St. George’s Cathedral, Jerusalem to be the executive secretary of the diocesan council.

His jurisdiction covered Israel, the Occupied Territories of Palestine, the Kingdom of Jordan and the republics of Syria and Lebanon. He was instrumental in developing many of the local institutions of the diocese, including St. Margaret’s Hostel in Nazareth, a hostel and conference center for pilgrims, and hospitals serving the large Palestinian refugee population in the West Bank city of Nablus as well as the Gaza Strip. He served two five-year terms as the provincial president-bishop and primate to Jerusalem, prior to his retirement in 1998.

Bishop Kafity was active in local and international ecumenism through the World Council of Churches and the Middle East Council of Churches, which made him an honorary life president. He was also a member of the Anglican Consultative Council, where he served on the standing committee. He participated in numerous interfaith committees, including the Royal Jordanian Committee on Jerusalem, The Interfaith Committee of Jerusalem and the Clergy of the Three Faiths for Peace Bishop Kafity traveled extensively for his work in ecumenical affairs. His efforts took him to Brazil, England, France, Canada, Peru, Ireland, Kenya, Jordan, Cyprus, Trinidad, Morocco, South Africa, New Zealand and many parts of the United States.

He received the Star of Bethlehem from the Orthodox Patriarchate of Jerusalem, was dubbed a Knight of the Holy Sepulcher by the Greek Orthodox Patriarchate, was made an honorary chaplain by the Order of St. John, was awarded the Royal Jordanian Star, second degree, by King Hussein and was made a life member on the supreme council of the YMCA. He was awarded honorary degrees by Virginia Theological Seminary, Dickson College and the University of Kent at Canterbury.

In 1998, he retired to Poway, California where he served as bishop-in-residence at St. Bartholomew’s Episcopal Church. His involvement in the Episcopal Diocese of San Diego began that year with visitations and workshops about the Middle East. His presence here was particularly helpful after the events of September 11th, as was his personal example of love, care, mercy and compassion. He strengthened interfaith relations with Jews and Muslims in this diocese, preaching regularly, leading workshops, and occasionally leading trips to the Holy Land.

He became an American citizen on March 15, 2002 and was made an honorary colleague in the Episcopal Church’s House of Bishops in 2004. He was one of the first to welcome the current diocesan bishop, Bishop Mathes, to his position after his election in 2004. The two maintained a warm working relationship over the past 11 years. Bishop Kafity attended annual conventions and participated in the life of the diocese as often as he could.

He Bishop Kafity is survived by his wife of 52 years, Najat Abed, their two daughters, Samar Hireish and Rula Kassicieh, and four grandchildren, Beshara, Serene, Michael and Mark. The wake will is scheduled for Thursday, August 27, 6 p.m. – 8 p.m. and the funeral will be Aug. 28 at 2 p.m. Both services will take place at St. Bartholomew’s. An interment service will take place in September for the family.

In lieu of flowers, the Kafity family kindly requests memorial gifts may be made to contributions are made in gratitude for Samir’s life and ministry to his parish: St. Bartholomew’s Episcopal Church, 16275 Pomerado Road, Poway, California, 92064 or online: www.stbartschurch.org.