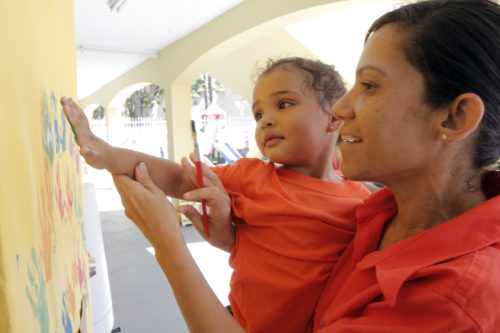 A teacher helps a child make a green handprint outside a classroom. Photo: Lynette Wilson/ENS

Centro San Justo, or Saint Just Center, operates 50 weeks a year from 6 a.m. to 5:30 p.m., an accommodating schedule that allows working parents, many of whom single mothers, a flexible, holistic childcare option. Saint Just is part of VIDAS, Episcopal Social Services, Inc., the social services arm of the Diocese of Puerto Rico, which seeks to respond to the needs of individuals and families offering integrated services aimed at providing a better quality of life.

The diocese has a long history of providing health and social services on the island, and continues to grow and expand its services in what is a critical time in Puerto Rico.

In recent years, Puerto Rico, a U.S. territory whose residents are American citizens, has experienced record outward migration in recent years owing to an entrenched recession dating to 2006 and its complicated economic relationship with the United States. In recent months, Puerto Rico’s $72 billion debt crisis and its inability to declare bankruptcy because of its territorial status has repeatedly made headlines and drawn comparisons with Greece. In early August, the first time in its history, Puerto Rico defaulted on its payment to bondholders.

On Aug. 8, Ramos issued a letter calling on the churches to come together to address the economic crisis, calling it the worst economic and social crisis since the Great Depression of the 1930s. The letter gives a brief overview of Puerto Rico’s economic history beginning with World War II and ending with the 2005 expiration of a section of Internal Revenue Code that offered U.S.-based companies federal tax exemptions on income earned in Puerto Rico.  Congress enacted the exemption in 1976 to increase economic development.

“In this moment, it’s clearer than ever, that we are experiencing a serious structural crisis in our neoliberal economic model,” wrote Ramos in the letter. “Our economy is not growing, it’s stagnant. The country has accumulated a large amount of public debt and does not have the capacity to collect the funds necessary to pay it.

“The response of our government has been to reduce public services, impose regressive taxes and use the retirement funds of public employees. The Puerto Rican government’s credit worthiness is practically null. They are predicting serious crises in healthcare services, the retirement system and a possible government shutdown.”

Regarding the letter and churches responding to the crisis, “this is where we need to be,” he said, during an interview with Episcopal News Service Aug. 12.

Added to that, more immediately, a severe drought has the San Juan metropolitan area, including Trujillo Alto, rationing water. Many residents have water one day and then go for two days without. Saint Just Center, explained the Rev. Ana R. Mendez, the center’s director who also serves as the associate program director for VIDAS, is operating under a state of emergency and dependent on a cistern.

The government of Puerto Rico provides financial support to the childcare cente to aid its efforts to provide assistance, education and transformational opportunities to children and their families. In May, Saint Just received a certificate of excellence in recognition of its work and commitment to boys and girls from the Administration for Care and Development of Children. 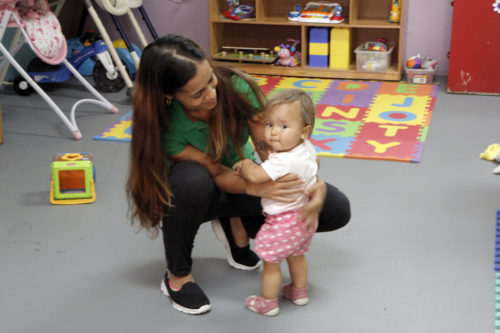 Most of the school’s students come from broken homes, where women have suffered high rates of domestic violence, where one or more parent may be incarcerated, and in some cases grandmothers are raising their grandchildren.

“The most beautiful thing is the transformation of the children and the family, complete transformation,” said Mendez, in an interview with ENS in her office.

It was Mendez, a longtime educator ordained an Episcopal priest seven years ago, who saw a need in Loíza, a small, impoverished town on Puerto Rico’s northeast coast, where she serves Misión Santiago y San Felipe, for a program to prepare pregnant teenage girls for motherhood and economic independence, and to educate other teens on the prevention of pregnancy and sexually transmitted diseases. She founded Canciones de Cuna in 2009.

In September, the diocese will break ground in Ponce, with the help of a $250,000 grant from singer Marc Anthony’s foundation, on a facility that will allow it to expand its services to homeless teens.