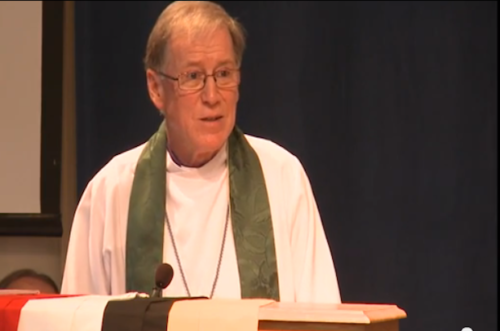 [Anglican Journal] The church’s “absolute and unwavering commitment” to addressing the injustices that Canada’s Indigenous people continue to experience is one of the key elements in achieving meaningful reconciliation between Indigenous and non-Indigenous people, the primate of the Anglican Church of Canada has said.

“I pray that as a church, we will rise up to this challenge, join hands with Indigenous peoples, walk with you, and with you speak truth to power,” said Archbishop Fred Hiltz in a sermon delivered during the opening eucharist of the 8th national Anglican Indigenous Sacred Circle on August 17. About 160 Indigenous Anglicans across Canada are gathered at the UNIFOR Family Education Centre in Port Elgin, Ont., for the triennial meeting, August 16-22.

As he reflected on the day’s readings—“a judgment against Israel, a psalm of penitence and a gospel of invitation to a new way of living”—Hiltz spoke passionately about how both Canada and the church have failed God and Indigenous people.

“…Like the people of Israel, we have followed other gods: the gods of imperialism, the notion of the superiority of some races over others, the institutionalizing of racism, the enacting of policies of assimilation grounded in nothing less than a resolve in cultural genocide,” said Hiltz. “…Dare I say, we provoked the Lord’s anger in the manner in which in the name of colonialism and the spirit of the doctrine of discovery we suppressed Indigenous [people] across Turtle Island and smothered their languages, culture and spirituality.”

Hiltz expressed the hope that the church will address the Truth and Reconciliation Commission (TRC) of Canada’s Calls to Action and turn them into priorities in its ministry among and with Indigenous people. “For those who have ears to hear, a conscience to stir and a heart to move, the [TRC] has humbled this nation to confess its sin, and to pray for guidance in walking a new and different way with the First Peoples of this land,” he said. “…If we are true to an abiding commitment to an evolving relationship with one another, the church can do no less, for the love of Jesus compels us.”

The primate also referred to the Anglican Council of Indigenous Peoples’ (ACIP) call for a change in the church’s governance structures to allow greater self-determination for Indigenous Anglicans.

The proposals—which include the creation of self-determining Indigenous ministries, provisions for urban ministry and Indigenous training and ordination programs, among others—will be discussed at the Sacred Circle.

“I hear a number of questions about the call, most in the spirit of understanding it and enhancing our capacity to embrace it, as fully as possible through whatever structural changes might emerge in the church,” said Hiltz, noting that initial discussions have taken place at the National House of Bishops and the Council of General Synod (CoGS).

Hiltz said the call for greater self-determination arises from the crises that Indigenous leaders witness in their communities, mostly as consequences of the Indian residential school system and the lingering effects of colonialism.

The Sacred Circle, Hiltz said, presents an opportunity for healing, reconciliation and a new life. “It’s about renewing commitments to ministry. It’s about the nurturing of a friendship in the spirit of Jesus’ teaching,” he said. “It’s about rebuilding trust, nurturing respect, restoring harmony and looking expectantly to a new day, new joys, new possibilities in this church of ours and in this country.”

The church’s commitments will be manifested in various ways—from engaging political leaders in the federal election campaign, to responding to the TRC’s Calls to Action and in heeding Indigenous Anglicans’ call for greater self-determination within the church.