[Diocese of Atlanta — Gainesville, Georgia] A near-capacity crowd of about 300 gathered on a recent Wednesday evening at Grace Episcopal Church to hear local pastors of different denominations explore ways their faith groups respond to social and legal challenges from the secular community.

The Rev. Stuart Higginbotham, rector at Grace Church, said, “Christianity beyond the Catchphrases” was the first such gathering in this Northeast Georgia city of 35,000 some 50 miles northeast of Atlanta.

The event was the result of regular gatherings by local clergy, said Jennifer Williams, director of communications at Grace. 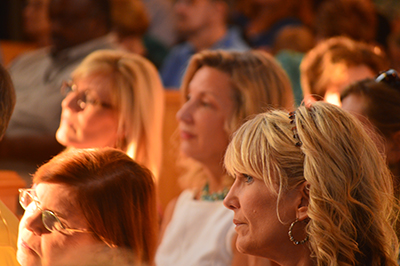 “We’re hoping that by bringing different denominations with different viewpoints together we can learn about our differences, and also our similarities, so that we can build ecumenical relationships and grow closer,” Williams said. 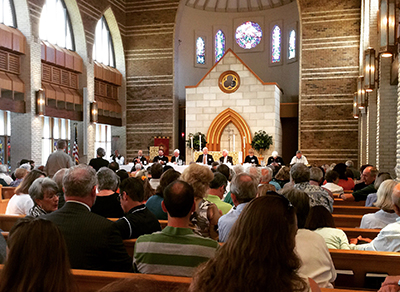 The issue all said they were seeking to resolve in their faith communities was the recent U.S. Supreme Court’s ruling on same-sex marriage.

Dr. Bill Coates, senior pastor at First Baptist Church, said the challenge of how to respond to that issue caused him to remember his first sermon as a pastor, which was based on Micah 6:8.

“What I didn’t realize was that would become the theme of my ministry, and what I believe should be the theme of the life of the church in Jesus Christ: to “do justice to all people, regardless of sexual orientation,” Coates said.

The only African-American member of the panel, the Rev. Stephen Samuel, said gender issues are important but take a secondary position to racial tensions at his church, St. John Baptist.

“The issue of sexual orientation, for us, seems to me like a political conversation because, as far as we’re concerned, there are some other social issues that the church that represents Jesus needs to put at the forefront,” Samuel said.

“How is it that some issues,” he added, “get so much attention, and there are other issues that are just as Gospel-centered, that require some (level of) attention?  Because…there is a cultural barrier.”

“We are a church that is of ‘open minds, open hearts, open doors’ and we are diverse,” Walton said. “And our diversity, the contribution we make, is sometimes our greatest challenge because when you have diversity you have a lot of different ways of looking at things.

“We’ll be having a great debate next April about same-sex marriage and transgender,” Walton said. “Personally, I just want to cry out, ‘Why can’t we be open? What are we afraid of?’ There is so much energy put in those debates that the real energy for the gospel gets diluted.”

Walton’s plea drew at least one “amen” from those gathered in the sanctuary.

The Rev. Cynthia Park, Grace’s associate rector, said The Episcopal Church has for decades been wrestling with how to be more inclusive.

“We feel constantly compelled to engage situations we may wish to ignore, to make room in leadership for persons we have kept marginalized and hidden for centuries, whether it’s the voice of women, (disabled) persons or persons who are homosexual or transgender,” Park said.

The Rev. Marshall Bruner, Center Point’s clinical director and a United Methodist minister, agreed with Walton that same-sex marriage was a major issue for Methodists.

“Do we accept people as they are? And how did they get to be how they are?” he said. “Did God create them that way or is it a lifestyle?”

He said the issue has caused churches to pull out of the denomination.

First Baptist’s Coates said he believes his denomination’s guiding principle should be “to do justice to all people, regardless of sexual orientation or anything else, and to love mercy and walk humbly with God. I think Baptists have to fight arrogance.”

Today’s high-tech society is another challenge to Christianity, Park said. “I’m concerned that the digital age of the Generation Zs will come in here and miss meeting God,” Park said.

The Rev. Don Harrison, an Episcopalian and Brenau University chaplain, said he believes those and other challenges are causing decline in the Christian faith.

“There are more mosques in Great Britain than there are Anglican churches,” he said. “About 86 percent of Americans claim that they are God-believing, but only 40 percent go to any church of any denomination.

“I think the struggle is how, in the 21st century, do you believe in a tradition that goes back thousands of years and is very slow to change and very slow to adapt?”

St. John Baptist’s Samuel said racism continues to segregate worship. He recalled one woman’s response when he invited her to his church. She said, “I’m not going to be the only white person sitting up in that black church.”

“I thought we were talking about Jesus,” Samuel said, “but at some point, a wall was built to where culture, or our differences, became more important. Am I to think she’s the exception or the general rule?”

Coates drew applause from the audience when he sought to give a different perspective to the challenges Christians face. “If the sky didn’t fall during the Inquisition, it’s not going to fall now,” he said.

Grace Episcopal’s Higginbotham said he hoped the event will serve as a “launching point for a series of conversations around the richness of different denominations.”

Similar gatherings held quarterly — with a variety of formats such as one featuring all women pastors, a look at topics in the news and an interfaith panel — are among the ideas for future events, Higginbotham said.

— Don Plummer is community and media relations coordinator for the Diocese of Atlanta.