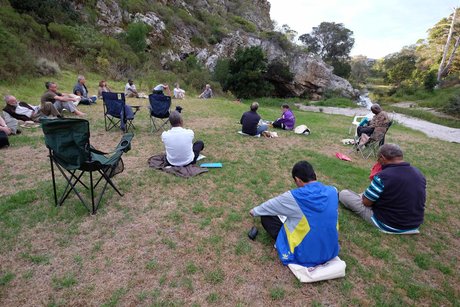 Bishops for climate justice at an early morning eucharist at the Volmoed Centre meeting in South Africa in February 2015. Photo: ACEN

[Anglican Communion Environmental Network] Several bishops around the Anglican Communion have made short videos describing the impact and implications of climate change in their dioceses and calling for prayer and action.

The series of videos – produced by the Anglican Communion Environmental Network (ACEN) – is intended as a resource for Anglicans and partners who are advocating for climate justice in the run-up to the 21st Session of the Conference of the Parties to the United Nations Framework Convention on Climate Change (COP 21) in Paris on 30 November-11 December.

Typhoons in the Philippines

The Rt Revd Jonathan Casimina, Bishop of Davao in the Episcopal Church in the Philippines, describes the brutal consequences of increasingly severe weather events, and in particular the typhoons that have caused death and destruction in his area. He concludes, “Climate justice is the people’s demand … If we partake of the eucharist, we must be willing to become eucharist for others, blessed, broken and given”.

In the Diocese of Northern Argentina in the Anglican Church of South America, Bishop Nicolas Drayson relates how the lives of Indigenous people in the Chaco region have been affected by extensive and continuing deforestation: “In a very real sense the [Indigenous communities] weep for the cutting down of the forest because it is the destruction of their home. As we face climate change we mourn for the destruction of our home, our planet. The changes that are taking place don’t affect just one part of the world; they affect us all, and particularly those without a voice – the Indigenous people.”

Suffragan Bishop Tom Wilmot in the Archdiocese of Perth in the Anglican Church of Australia welcomes the moral leadership provided by the Papal Encyclical Laudato Si’, reflects on the situation in Australia and, with COP 21 in view, asks for prayers for a change of heart among politicians who continue to deny the human-induced acceleration of climate change.

Each of the video contributors was one of the concerned bishops who met in Volmoed, South Africa earlier this year and released The World is our Host: A Call to Urgent Action for Climate Justice in response to the ‘unprecedented climate crisis’.

More video messages from bishops in different parts of the Communion will be published on ACEN’s website in the coming days, including from the Anglican bishops of Swaziland and New York.

Guided by the Anglican Communion Fifth Mark of Mission ‘to strive to safeguard the integrity of creation and sustain and renew the earth’, ACEN encourages Anglicans to support sustainable environmental practices as individuals and in the life of their communities; provides information about policies embraced by synods, councils and commissions, and especially by the international leadership structures of the Communion; and shares advocacy and information about local best practice and resources.