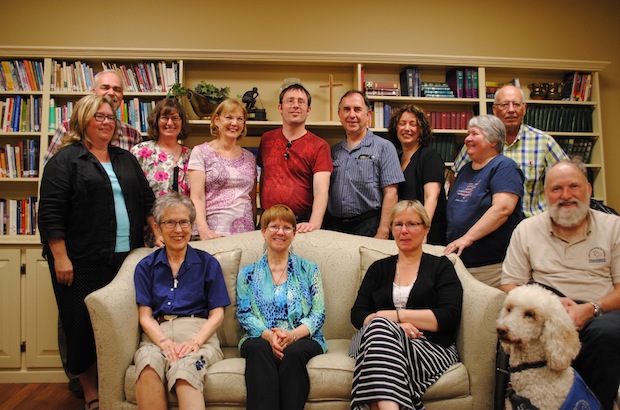 [Anglican Journal] Across the Anglican Church of Canada, the Book of Alternative Services and the Book of Common Prayer are the liturgical foundation for Sunday morning services.

But at St. Christopher’s Anglican Church in Burlington, Ont., the traditional liturgy is getting a reboot.

“For the last six years we’ve hosted a gathering to which everyone is invited in the spring, to ask questions about what’s going on in people’s lives, what do we think God is trying to do with us,” said Archdeacon Steve Hopkins, rector at St. Christopher’s. Out of these conversations, themes for worship and education are identified for the coming year, he said.

This day—“discernment day,” as it is known in the parish—goes far beyond a simple planning session, though. Open to anyone who wants to attend, it is about creating new service texts that reflect the thoughts, feelings and concerns of the congregation.

While these services follow the traditional Anglican rhythm, their content changes based on the season and the theme. If the theme being explored in Advent, for example, is “letting go of busyness,” the confession will be written to reflect that.

“It makes Sunday morning alive and magical and powerful,” Jane Wyse, a member of St. Christopher’s, said of her experience with discernment day. “It relates to our life and what we’re going through, and it’s not something that you say over and over again every Sunday; it changes up and it speaks to you more.”

This was a feeling that other people related to as well.

“The deepening and broadening of my own faith journey has been exponential in the six years that we’ve been doing this,” said Canon Christyn Perkons, who in addition to being a parishioner at St. Christopher’s serves as director of congregational support and development at the Niagara synod office. “I think the theology of so many of the things we deal with mean so much more to me…I understand my own belief system around it in a way I didn’t before.”

For others, it is the ability to be honest about what they believe—or don’t believe—that makes the experience regenerative.

“I feel very liberated,” said Ted Taylor. “I feel that I am not being required to either mouth words that I have trouble believing, or standing there silently while other people around me mouth them.”

But the new approach to liturgy is not only about innovation; it is also about maintaining a connection to the traditions of Anglicanism, according to the Rev. Dan Cranley, pastoral associate at St. Christopher’s.

“We’re trying to honour two things: what’s going on in the lives of the community along with honouring the Anglican rhythm of worship,” he said. “Seeing those two things come together for me has been really powerful.”

But what led to such radical changes being implemented in the first place? In Becoming a People of God: A New Approach to Liturgy and Learning, a document Hopkins wrote detailing the process and rationale of the new liturgical changes, he explained how a story told to him by a fellow priest transformed his outlook on the purpose of liturgy.

In the story, a parishioner frustrated by congregational conversations about how the church could reach out to its neighbourhood more effectively, asked, “Why do we have to worry about these other people? Why can’t we just worry about ourselves?”

Hopkins argued that it is not that this parishioner hadn’t understood the church’s teachings, but that she was expressing exactly what she had been taught by traditional liturgy: that the church is separate from the world and needn’t concern itself with its neighbours.

“The responsibility for this outcome did not lie with the woman,” Hopkins said. “It lay with those responsible for her formation in the faith and, ultimately, with the curriculum for that formation [the weekly liturgy and the life of the community that gathers to celebrate it].”

The changes to liturgy at St. Christopher’s are about being more intentional concerning teaching, he said, adding that he has seen some positive outcomes.

“I think there’s a shift in expectations,” he told the Anglican Journal. “I think a lot of folks never expected anything meaningful to happen in church, and I think there is some anticipation that something is going to happen—I’m going to hear something; I’m going to be challenged; it’s going to make me thoughtful.”

“I would say that discernment day has moved [us from] the Church of England of the 16th century to the Anglican Church of St. Christopher’s of the 21st century,” he said. “It is bringing people into a connection where they can see the church as being applicable to their daily lives and their daily needs, not as an historical repetition of words.”