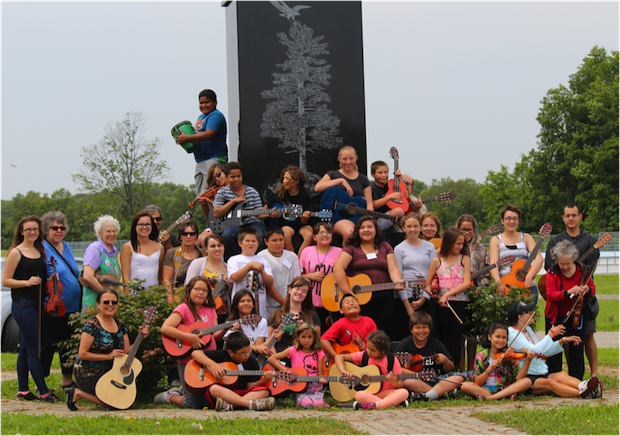 Campers and volunteer leaders at the second Music for the Spirit summer camp in Ohsweken, Six Nations. Photo: Richelle Miller

[Anglican Journal] The village of Ohsweken in Six Nations of the Grand River, Ont., recently played host to the second Music for the Spirit summer day camp, which three Anglican Church of Canada agencies co-sponsored with other faith groups and charitable organizations.

The nine-day camp, held July 2-10, was geared toward youth ages nine through 14, and was aimed at “creating friendships, joy, and laughter through music.”

It was also meant to explore “life promotion strategies” by “building the self-esteem of young people,” teaching “respect and acceptance for oneself and others,” and providing “a creative outlet for the expression of emotions,” according to a grant proposal submitted to the Anglican Healing Fund by the Rev. Norman Casey, of the Anglican Parish of the Six Nations. (A grant from the Anglican Healing Fund, in combination with a 2014 donation from the Dreamcatcher Charitable Foundation, provided for the bulk of the camp’s inventory of guitars and keyboards.)

The camp was free to the public, and had a full complement of 27 participants, just over half of whom were returnees from the previous year. Eighteen adult and young adult volunteers from the local Six Nations community donated their time and energy as camp leaders in order to make it a reality.

Campers had the opportunity to gain experience on a number of different instruments, including guitar, violin, and keyboard. The guitar played an especially prominent role, due largely to its historic “affinity with the Six Nations community,” said an evaluative report co-authored by Scott Knarr, camp director, Richelle Miller, camp media and advertising co-ordinator, and the Rev. Casey.

Participants were able to explore and connect to parts of their cultural heritage as camp leaders guided them through the making of traditional hand drums, water drums, and cow horn rattles—which they were free to take with them at the end of camp. Four Mohawk-language singing mentors were also on hand to teach campers traditional singing methods of the Six Nations; one participant discovered a hitherto unknown passion for traditional dance during these lessons. Several campers had the chance to share what they had learned with the wider Six Nations community on a trip to the local Iroquois Lodge seniors’ residence, where they performed a selection of songs accompanied by guitar and violin.

The majority of the camp took place in the Six Nations Community Hall, a space the report described as “a joy from which to make music.” The Six Nations Elected Council waived the operation and maintenance fees for the camp’s duration as a gesture of support and an acknowledgment of the importance of Music for the Spirit for Six Nations youth. The hall also served as the site of the camp’s closing concert, which was well attended by participants’ families and members of the Six Nations community.

Faithlife Financial, Mount Zion Evangelical Lutheran Church in Waterloo, the Anglican Council of Indigenous Peoples (ACIP) and the Anglican Church of Canada’s Indigenous ministries also contributed to the camp. The latter two were particularly helpful in securing the presence of several traditional Indigenous music instructors, who made the trip from Alaska to teach at the camp for a second year, said organizers. A donation from a local member of the Anglican Parish of the Six Nations helped cover the cost of the meals and snacks for the campers.