[Episcopal News Service] Nearly 50 years after Jonathan Daniels was killed by a special deputy from Lowndes County, Alabama, the pilgrims who came to Hayneville Aug. 15 to remember the seminarian’s martyrdom walked through the streets led by a county sheriff’s squad car. 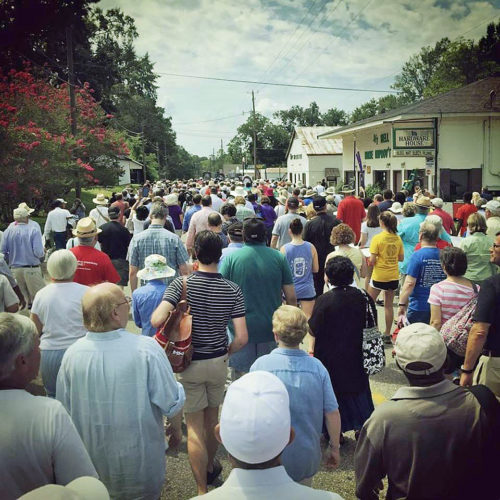 About 1,500 people marched through Hayneville, Alabama, during the Aug. 15 pilgrimage to commemorate Jonathan Daniels and the other martyrs of the civil rights movement in Alabama. Photo: Ben Thomas/School of Theology, University of the South via Twitter

Some 1,500 people from across The Episcopal Church and elsewhere walked the path that Daniels, 26, Richard Morrisroe, also 26, Thelma Bailey, 19, and Ruby Sales, 16, took on Aug. 20, 1965, the day Daniels died stepping in front of a shotgun aimed at Sales. Morrisroe, who was a newly ordained Roman Catholic priest and was seriously wounded that day, returned to Hayneville for the day. The pilgrims ranged from babies in strollers to elderly in wheelchairs.

The pilgrimage, which began at the Lowndes County Courthouse, formed an extended Liturgy of the Word that included stops at the jailhouse where Daniels and the others were held for six days, readings about Daniels’ life (including two from Outside Agitator: Jon Daniels and the Civil Rights Movement in Alabama by Charles Eagles and a letter Daniels wrote to his mother from jail), as well as prayers and the dedication of an Alabama Historical Marker at the site where Daniels was murdered.

The pilgrims then returned to the courtroom where Daniels’ killer, special deputy Thomas Coleman, was found innocent of a manslaughter charge. Pilgrims packed the courtroom, filling the jury box and other seats, sitting on the floor and finding places to stand along the walls. Two large tents pitched on the courthouse lawn sheltered others who watched the Eucharist via large television screens.

Some of the 28 Episcopal Church bishops who marched in the Aug. 15 pilgrimage to commemorate Jonathan Daniels and the other martyrs of the civil rights movement in Alabama pose in Hayneville, the site of the gathering. Photo: Ellen Hudson/Diocese of Alabama

The judge’s bench in the courtroom served as the altar where Diocese of Alabama Bishop John McKee Sloan presided at the Eucharist. Many of the 28 Episcopal Church bishops who participated in the pilgrimage distributed communion inside the courtroom and outside on the courthouse lawn.

“We are not here because we think good thoughts, or simply because we are nice people, although we are. We are here because we who have been baptized – we’re not simply baptized into church membership – we were consecrated to radical discipleship, into the Jesus Movement to change this world,” said Presiding Bishop-elect Michael Curry during his sermon. “The same movement that called Jonathan, and Mary, Queen Esther, Moses, Abraham and Sarah and Hagar, the same movement that moved the world into being.” 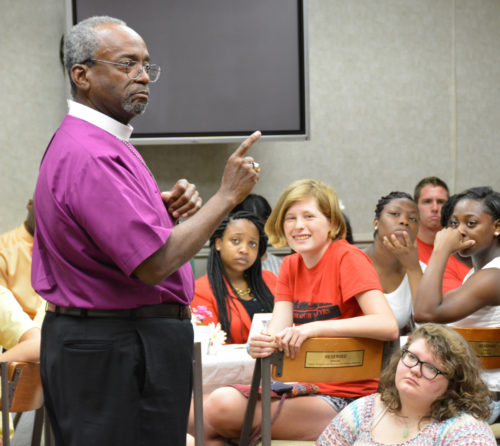 Presiding Bishop-elect Michael Curry speaks during a breakfast for young participants in the Aug. 15 pilgrimage to commemorate Jonathan Daniels and the other martyrs of the civil rights movement in Alabama. Curry later said in his sermon that the gathering reminded him it was time to pass the torch to a new generation who will continue the struggle for equal rights. Photo: Ellen Hudson/Diocese of Alabama

Curry, who was a 12-year-old in Buffalo, New York, when Daniels was killed, met early that morning with many of the young people who later were part of the pilgrimage. During his sermon, Curry said he realized during the meeting that “our task now is to pass the torch to a new generation.”

“They’ve here, they don’t have to be here, but they’re here,” he said of the young people.

“The youthful energy that fueled the civil rights movement before and changed the face of this nation,” Curry said, now needs to be combined with “the wisdom of the elders.”

“That’s the movement we’re all a part of. It’s a movement that believes passionately that love can actually change the world.”

“It can,” the congregation replied.

Curry concluded by reminding the pilgrims that Jesuit philosopher and scientist Pierre Teilhard de Chardin contended that the discovery of fire and humans’ capacity to harness that energy was the most important scientific discovery of all time because of the advances in civilization it enabled, up to and including the fuel combustion in rockets that launched satellites into the air, allowing the use smartphones. De Chardin then went on to say, Curry recalled, that if human beings ever discovered how to harness the power of love, it would be the second time in history that humanity had discovered fire.

“We are here because Jonathan Daniels discovered fire,” Curry declared with a shout. “Martin Luther King discovered fire. So now we’re going to pass that torch to a new generation.”

After Curry’s sermon a number of notable pilgrims were introduced, beginning with Lowndes County Judge Adrian Johnson, who currently presides in the courtroom used for Liturgy of the Table. Johnson, who said he has participated in the annual pilgrimage for the last four or five years, told the congregation that it was “a humbling experience” to hold court in a room that invokes “a list of injustices” committed in the name of the legal system.

Johnson, who helped cook the young people breakfast that morning, said he told those participants that the fight for voting rights is not a fight lost in the dusts of history. “That struggle continues today. There are folks that want to erode the right to vote. There are folks who are trying to dismantle the Voting Rights Act,” he said. “We need to continue to be vigilante and guard against not only those who are trying to take that right, but, more importantly, apathy because apathy is perhaps more dangerous than those who would see to take the right away from us.”

Col. James Inman, chief of staff at the Virginia Military Institute where Daniels was valedictorian for the Class of 1961, told fellow pilgrims that it was love that prompted Daniels to act as he did that day in 1965 when he pulled Ruby Sales out of the way of Coleman, catching instead the point-blank blast of Coleman’s gun in his chest. Inman called Daniels’ split-second decision “an act of love that is informed by all that preceded it.”

When such an act saves the life of another, he said, “the act not only endures; it grows and expands in its influence over time.” 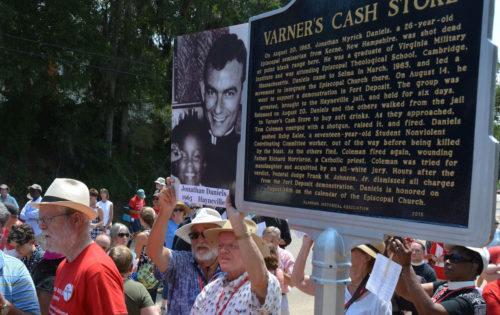 Two friends of slain seminarian Jonathan Daniels hold a photo of him Aug. 15 near the just-dedicated Alabama Historical Marker erected where Varner’s Cash Store stood. Daniels was killed outside the building on Aug. 20, 1965. Photo: Ellen Hudson/Diocese of Alabama

Daniels’ life and all the lives of all the martyrs of Alabama, whom the pilgrimage also commemorated, were not lost in vain, Inman said. “Now more than ever, their examples should lead us to act to ensure the triumph of good over evil; to encourage civility, collaboration and love over violence, discord and hatred.”

While Daniels was in Alabama in the summer of 1965, he lived with Alice and Lonzy West, an African-American family in Selma. Roderick West, one of their 11 children, told the pilgrims that Daniels was a stickler for education who also “was always talking about God.

“I remember that morning when Jonathan left our apartment – he was coming to Lowndes County to help people register to vote – Jonathan actually came back three times and told me and my brothers and sisters that he loved us … he said ‘I want you all to make sure that you study hard. Let me know what you need, pens, books, whatever.’ … to me, he was just like a big brother.”

Daniels, West said, was the reason he had just retired after spending 30 years as a schoolteacher.

Video of Johnson, Inman, Daniels and others is here.

The Eucharist included a roll call of the martyrs of Alabama.

Ruby Sales, the then-17-year-old student whom Daniels saved, was not at the pilgrimage, but she spoke the next day at St. Alban’s Episcopal Church in Washington, D.C., saying  that her friendship with Daniels bridged the gap between his “white elite” world and her poor, black one.

“He walked away from the king’s table,” she said. “He could have had any benefit he wanted, because he was young, white, brilliant and male.”

On Aug. 14, Morris Dees Jr., co-founder and chief trial counsel for the Southern Poverty Law Center, told a gathering at St. John’s Episcopal Church in Montgomery, Alabama, that “our government has to be neutral in matters of faith, but people of faith do not have to be neutral with matters of government, and we rely on people not to be.

“Jonathan Daniels was not neutral when he spoke truth to power, when he sought the right to vote and when he saved the life of a dear person by putting his body in front,” he said.

Saying only “true reconciliation” can only move the country away from the racial tension that plagues it, Dees said Daniels’ killer later raised two multiracial grandchildren. “Something changed,” Dees said of Coleman, adding that Coleman’s son, a retired Alabama state trooper “is probably one of the most liberal guys I know; he spoke at my mother’s funeral.” 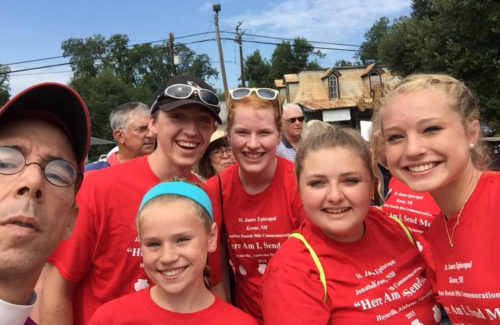 Commemorations of Daniels’ life and death continue. In Keene, a year’s worth of events has been organized by members of St. James Episcopal Church, along with others. On Aug. 22, a commemorative weekend will begin with panel discussions featuring people who knew Daniels followed by an evening screening at Keene’s Colonial Theater of the 1999 nearly hour-long documentary Here Am I, Send Me: The Story of Jonathan Daniels, by Keene State professors Lawrence Benaquist and William Sullivan.

Sales, who operates the Atlanta, Georgia-based SpiritHouse Project to work for racial, economic and social justice, is scheduled to preach in Keene at St. James on Aug. 23. New Hampshire Bishop Rob Hirschfeld will preside. A two-mile “walk of remembrance” to the Daniels’ family gravesite will follow.

Other coverage of the piligrimage is available from the Diocese of Alabama here.

The Daniels documentary, narrated by actor Sam Waterston, is viewable below.