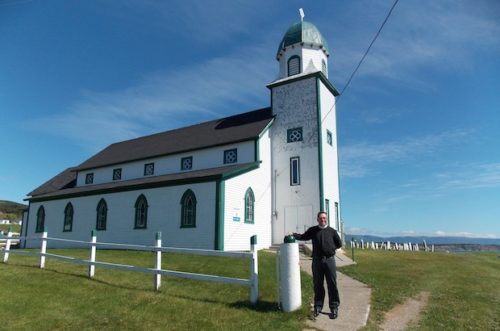 [Anglican Journal] The Rev. Steven Maki is part of a long tradition of cross-border religious reciprocity. He’s an American Episcopal priest serving in an Anglican parish in Newfoundland.

In fact, the Massachusetts-raised Maki is now ministering in his second parish in the diocese of Western Newfoundland—his first being Flower’s Cove, where he served from 2005 to 2007. For the past 18 months, he’s been priest to the 600-family, three-point parish of Grand Bay, where he hopes to stay for at least four years. Maki is one of three U.S. Episcopal expatriates making up for the scarcity of Anglican clergy in the diocese.

Growing up in Lunenburg, Mass., of Finnish Lutheran and French-Canadian Roman Catholic descent, Maki was raised a Lutheran but gravitated as a young adult to The Episcopal Church. “For me, it was a via media between my father’s Lutheranism and my mother’s Roman Catholicism,” he said. Graduating from the Episcopal Divinity School (EDS) in Cambridge, Mass., in 2003, he was invited to the diocese of Western Newfoundland during a visit by retiring Bishop Leonard Whitten and ordained in Flower’s Cove by then Bishop (now Archbishop) Percy Coffin in 2005. After serving that parish for four years, he returned to Boston for a four-year inner-city ministry on Newbury Street.

Maki likes the friendliness and the strong basic connections between people in the Anglican church in rural Newfoundland and the informal way things get done. “In the U.S., The Episcopal Church is seen as the church of the elite, of the Mayflower bluebloods who go way back, but here in Newfoundland it’s the church of the people,” he said.

Maki also likes Newfoundlanders’ passion for music, fondness for fellowship and the sheer authenticity of their congregations. “I’m especially fond of Holy Trinity at Codroy, the oldest and most traditional church in my parish,” said Maki, who also ministers to St. John the Evangelist in Cape Ray and St. Paul’s in Grand Bay.

For decades, U.S. Episcopal priests, many from EDS, have been recruited—to all three Newfoundland dioceses to serve congregations lacking Anglican clergy. Facilitating that vital recruitment is the Rev. Alexander “Randy” Daley, a retired Episcopal priest from the diocese of Massachusetts. “We had a surplus of clergy down here and I felt strongly that that people who had finished divinity school should have a place to go and do the Lord’s work,” said Daley, who himself served in Western Newfoundland’s Stephenville parish after leaving the military. “I’d work with [now retired] Archbishop Stewart Payne of Western Newfoundland and sometimes with [now retired] Bishop Eddie Marsh of Central Newfoundland to send people up there.”

Episcopal priests went north to The Rock at the rate of one, sometimes two, a year, for a total of about 35 during Daley’s time, and a smaller number of Anglican priests left Canada to serve in New England. “Anglican bishops have come down from Newfoundland to ordain Episcopal priests in Massachusetts,” Daley said.

The three-decade exchange has worked out well, with most  Episcopal priests settling in handily. “I sent up one priest who said, ‘I’m never coming back. It’s paradise up here,’ ” Daley recalled. “So I phoned him in Rocky Harbour in midwinter when I knew there’d be a Newfoundland blizzard brewing, and still he said, ‘I haven’t changed my mind. This is just a wonderful place to be.’ ”

One of the longest-serving Episcopal priests he helped send to Newfoundland was the Rev. Robert Elder, a retired U.S. navy chaplain who spent 20 years at Flower’s Cove. That parish, whose Episcopal priest, the Rev. Bryan Pearson, recently returned to the U.S., will soon have another in the person of Boston-trained Fr. Omar Reyes. He will be ordained a deacon at St. Barnabas on September 1 by Archbishop Percy Coffin.

If the transition went smoothly for the priests, it didn’t always sit well with Daley’s fellow clergy in Massachusetts. “One seminary professor got angry and said, ‘You’re thwarting our system.’ And I said, ‘Listen, you’ve got about 100 people wanting to go into the ministry and you can only take 10. You’ve got well-qualified people coming out of our seminaries and there’s no reason why they shouldn’t go up there. It’s very welcoming.’ ”

Daley keeps a strong connection with Atlantic Canada in the shape of a farm in Prince Edward Island, which he acquired for $1,200, then built a cabin on for cash-strapped Newfoundland clergy to vacation in. “The farm’s still a going concern,” he said.

What about differences between Anglicans and Episcopalians? “There are no major ones,” Daley said. “We’re pretty much alike.” Just as Anglican churches have varying styles of worship, “We have ‘high and crazy, low and lazy, broad and hazy.’ Like in Canada, we’re a very flexible church.”

But according to the Rev. James Pratt, a cradle Episcopalian and Boston lawyer-turned-priest who was ordained in Canada by Bishop Whitten and spent more than six years in Western Newfoundland’s parish of Cow Head, the ecclesiastical culture is somewhat different. “In The Episcopal Church there’s more of a tendency toward congregationalism in terms of polity. So there’s a little more independence in the parishes and a bit less power in the bishops,” he said. Hence, the relatively loose organization and less structured way of doing things in Cow head suited him well.

Still, he found going from downtown Boston to Cow Head a big switch. “With the exception of the park ranger and a couple of teachers, I was the only outsider,” recalled Pratt, now rector of St. Philip’s in Montreal West. “Everyone else not only had century-old roots in the community but was also related to everybody else!”

Newfoundland is a seductive place famed for insinuating itself into the psyches and souls of all who spend time there, drawing them back again and again. But how about those Newfoundland winters with their legendary nor’easters—aren’t they worse even than New England’s? “About the same,” said Daley.

“Definitely worse,” said Maki, “because of all that blowing snow.”

Looking back, Daley recalls his time on The Rock as an entirely positive experience. “I cried when I left,” he said. “It was the best and least bureaucratic ministry I ever had.”