It is also because it is very difficult to “celebrate” the end of a war where victory was wrought with the loss of 120,000 people who were victims of the first two – and, so far, only two – atomic bombs used.

But that is exactly what happened: the first bomb killed 80,000 people when it was detonated over the Japanese city of Hiroshima on Aug. 6 1945; and on Aug. 9, 1945 40,000 people were killed when a similar bomb was detonated over Nagasaki. Tens of thousands more would die of radiation poisoning in the weeks, months and years ahead.

On Aug. 15, 1945, the Japanese leader, Emperor Hirohito, announced his country’s unconditional surrender in a radio address, saying the decision had been made because of the devastating power of “a new and most cruel bomb.” 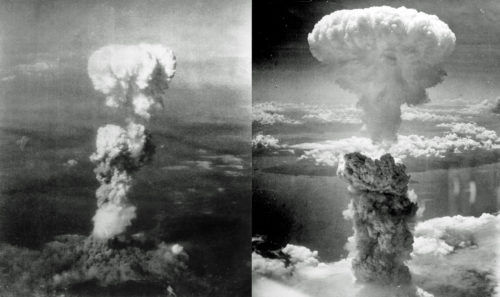 In Britain, to mark the 70th anniversary of the end of the war, the Queen and Duke of Edinburgh will join veterans, former prisoners of war and civilian internees at St Martin-in-the-Fields Church in Trafalgar Square, London, for a commemorative service organized by the National Far East Prisoners of War Fellowship Welfare Remembrance Association.

The 70th anniversary of the end of the war is seen as a “very important” occasion by the Anglican Church in Japan, the Nippon Sei Ko Kai (NSKK).

“While the war ended with the defeat of Japan, about 20 million people in several Asian/Pacific countries including Japan were victims,” the NSKK House of Bishops said in a statement. “Pain and suffering brought by sacrifices and damage of this war have not yet healed even after 70 years.

“We especially bear in mind that our country has not been able to make reconciliation and peace with the countries we invaded.

“In this year of the 70th anniversary of the end of the war, we pray for those who were victims of this war and who are still feeling the effects of pain, suffering, and sorrow, and we reaffirm our commitment to the future peace of the world.” 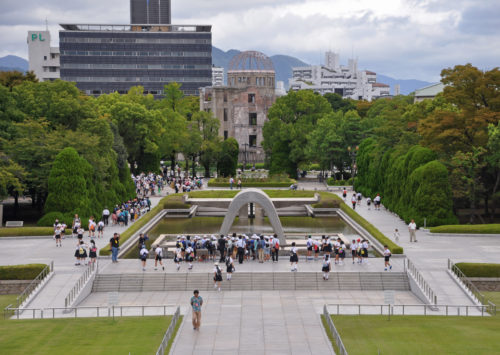 The Hiroshima Peace Park includes the Peace Museum and the skeletal remains of the Hiroshima Prefectural Commercial Exhibition hall. Completed in 1915, the hall was the only building left standing near bomb’s hypocenter. It soon became known as the Atomic Bomb Dome and is formally the Hiroshima Peace Memorial. Photo: Mary Frances Schjonberg/Episcopal News Service

In 1995, the NSKK “admitted our war responsibility, based on repentance and looking toward the 21st century,” the bishops said. “We determined to walk with those who were historically persecuted and victimized during the war and are still discriminated against.”

In the following year, the NSKK Synod adopted the Province’s “Statement on War Responsibility” in which all churches agreed to collectively share NSKK’s war responsibility, to convey an apology in the name of Nippon Sei Ko Kai to the churches in the countries which Japan had invaded, and to start and continue a program in each diocese and parish “to review the historical facts and to deepen our understanding of the Gospel.”

“We have strived to establish collaborative relationships with Asian churches, especially the Anglican Church of Korea and the Episcopal Church in the Philippines,” the bishops say, “and have committed to support the Okinawan struggle for peace and human rights.

“We reaffirm that peace and reconciliation in the entire East Asian area, including a peaceful reunion of North and South Korea and the establishment of a more peaceful Okinawa will continuously be important issues in the missionary work of Nippon Sei Ko Kai, and will continue our efforts to achieve these goals.”

In June, the bishops of the NSKK gathered in Okinawa to commemorate the 70th Anniversary of the end of battle there in which more than 200,000 people were killed. And they will gather again in Hiroshima on Aug. 6 and in Nagasaki on Aug. 9 for requiems in memory of the dead. 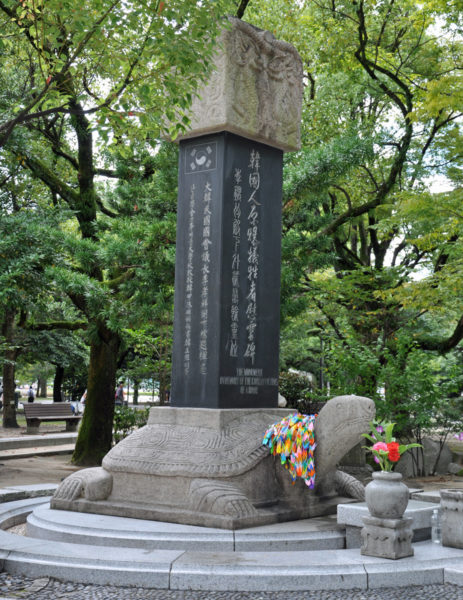 A cenotaph for Korean victims of the atomic bombings is in the Hiroshima Peace Park. Photo: Mary Frances Schjonberg/Episcopal News Service

Japan annexed Korea in 1910 and held the peninsula until 1945. Some estimates say that 700,000 Korean civilians — including teenage girls — were brought to Japan through coercion before and during the war to work. Many other thousands were forced to into hard labor or conscripted. It is estimated that at least 45,000 Koreans were among the more than 2000,000 who were killed in the bombings of Hiroshima and Nagasaki, or were exposed to lethal post-blast radiation. In addition, 300,000 Korean survivors were returned to Korea after WWII ended Japan’s colonization of Korea.

In the post-war Era, Japan adopted a “peace constitution” which committed the country to pacifism. This is now at risk through the introduction of new security bills through the Diet – the Japanese Parliament, which would allow for “collective self-defense.” (News, 22 July). The NSKK is opposing the move.

“We have the Peace Constitution which denounces the war, and because of this Peace Constitution, Japan has never been involved in war and has killed no one for the past 70 years,” the Most Rev. Nathaniel Makoto Uematsu, the Primate of Japan, told ACNS.

“Right now, the Japanese government is trying to modify the Peace Constitution so that Japan could play an active role in war and conflict in the world using military force in future. We, the NSKK, are working hard to stop this government’s policy.”