[Episcopal News Service] More than five and a half years after a catastrophic earthquake destroyed Holy Trinity Cathedral in Port-au-Prince, on July 20 workers began cleaning the site, sectioning off the work area, removing bricks, terracotta tiles, sections of the cathedral’s walls and other remnants that eventually will be incorporated into the construction of a new cathedral.

“This is a great sign of hope for the Haitian people. I started to say for the Episcopalians of Haiti, but in truth, the significance of Holy Trinity Cathedral goes far beyond our own faith community to the larger society,” said Bishop Stacy Sauls, chief operating officer for the Domestic and Foreign Missionary Society, the legal and canonical name under which The Episcopal Church is incorporated, conducts business, and carries out mission.

“And, perhaps most importantly of all, the beginning of this work is a sign of the spiritual family that we are part of, a visible symbol between the Haitian church and the rest of The Episcopal Church. We truly are ‘one in the Spirit,’ ” he continued. 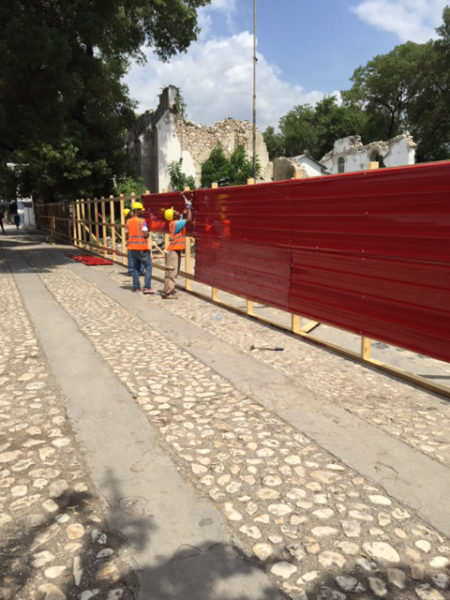 Workers built a red-metal fence on July 20 to secure the work site. Photo: Diocese of Haiti

The Episcopal Diocese of Haiti is numerically the largest of The Episcopal Church’s 109 dioceses. Almost immediately following the earthquake, the church began a fundraising campaign to rebuild Holy Trinity Cathedral, a major spiritual, educational and cultural center located in the heart of downtown Port-au-Prince. Architectural plans for the estimated $25-million project were released in 2013.

“The cleaning-up process at the cathedral site is a pleasant first step in the building of the most important holy structure in the Diocese of Haiti,” said Haiti Bishop Jean Zaché Duracin, adding that he’s thankful for the generous donors who’ve supported the rebuilding effort over the last five years. “It is a big sigh of relief on my part and all of us involved in the rebuilding process, indeed, we are all involved.”

Rebuilding Holy Trinity Cathedral “is more than just a building, it’s a sign of hope,” said the Rev. David Boyd, major gifts officer for Haiti and the interim director of the development office of the Domestic and Foreign Missionary Society.

Holy Trinity fits the ancient concept of a cathedral as a center of light, spirituality, arts and learning, said Boyd.

The diocese moved an income-generating parking lot used weekdays by a bank opposite the cathedral complex to make way for the site clearing. On the first day of the 45-day project, workers built a red-metal fence to secure the work site and began marking off sections of the old cathedral, making an inventory of remnants and their locations with the intention of restoring sections of standing walls, bricks and other surviving architectural details to their original places in the new design.

Workers must also exhume bodies from crypts under the cathedral’s footprint for reburial within in the complex. 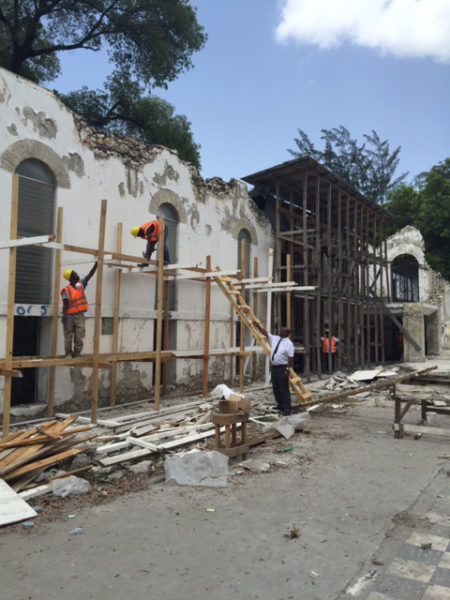 Sections of Holy Trinity Cathedral’s exterior wall withstood the magnitude-7, catastrophic earthquake and will be incorporated into the new cathedral. Photo: Diocese of Haiti

Long seen as “spiritual and cultural soul of Haiti,” the Holy Trinity Cathedral complex is home to a temporary worship space, a primary and secondary school, and a world-class music school that now is operating out of what was the Convent of the Sisters of Saint Margaret.

The cathedral’s place as Haiti’s soul is reflected in 14 murals depicting biblical stories and religious scenes done in Haitian motifs that lined the building’s interior walls. The paintings, completed in 1950-51, were crafted by some of the best-known Haitian painters of the 20th century. The bishop who commissioned the murals, Alfred Voegli, was criticized at the time for allowing Voodoo to be part of the Haitian motifs used in the murals. Now those paintings are seen as an important moment in the development of Haitian art.

It’s unclear when construction on the new cathedral will begin, said Sauls, adding that continuously rising construction costs are a challenge to working in Haiti. He said he hopes construction will begin soon.

“Another challenge, and this is often forgotten, is that the cathedral itself is only part of a larger complex of ministries… . One challenge is working on all these projects together to coordinate a unified approach,” said Sauls. “And, of course, money is a challenge. We need the church throughout the world, and especially within The Episcopal Church, to help bear the burdens of our brothers and sisters in Haiti. That’s what the Gospel is all about. They need us, but just as crucially, we need them. We’re all in this together. This is our church in Haiti.”

For the primary users of the complex, Episcopalians and students, cleaning the property is a major sign of hope that a new cathedral is on the horizon – and that this part of their city will be special again, said Sikhumbuzo Vundla, the Diocese of Haiti’s chief of operations.

“For the worshipers and the faithful, it is a special feeling, one of joy that will overcome the pain and suffering lived immediately following the earthquake and the strength that it has taken them to endure this mourning for five years,” he said. “The mourning of the lives lost will never stop, but the resurrection of the new cathedral will alleviate the suffering, since Holy Trinity Cathedral was so dear not just to the Haitian community but also to all visitors and people of all walks of life.”

On Jan. 12, 2010, Haiti suffered a magnitude-7 earthquake that killed more than 300,000 people, left as many wounded, and displaced more than 1.5 million people in what was one of the world’s worst natural disasters in recent history. In a matter of seconds, the diocese lost 80 percent of its infrastructure in Port-au-Prince and Léogâne, the epicenter of the earthquake less than 20 miles west of the capital.

In the earthquake’s immediate aftermath displaced people sought shelter and humanitarian relief in 1,500 tent cities, and governments and international relief agencies committed billions of dollars in aid to rebuild the Caribbean nation, long considered the poorest in the Western Hemisphere.

More than five years later, it’s important that Episcopalians remain aware of the situation in Haiti.

“Awareness leads to prayer; prayer leads to action. One of my spiritual heroes, James Otis Sargent Huntington, who founded the Order of the Holy Cross, said, ‘Love must act as light must shine and fire must burn,’ ” said Sauls. “Likewise, prayer must act because true prayer finds its meaning in love. For now, we pray. But that must lead to action. For now, those prayers can be made and that action taken through The Episcopal Church Development Office.”

Click here for more details on how you can help rebuild Holy Trinity.