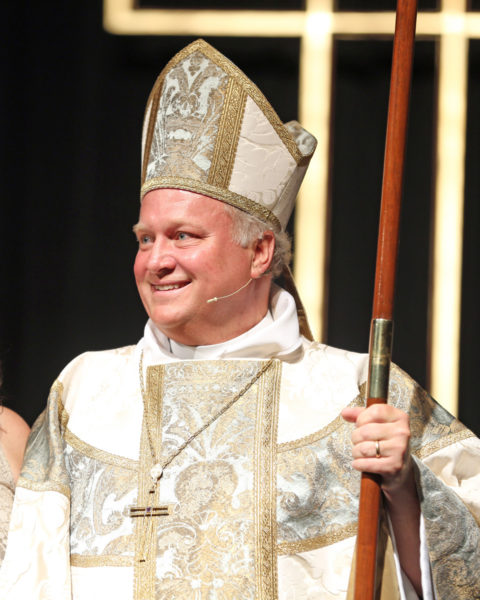 [Diocese of the Central Gulf Coast press release] The Rt. Rev. J. Russell Kendrick was ordained and consecrated as the fourth bishop of the Diocese of the Central Gulf Coast at 2 p.m. on Saturday, July 25, at the Mobile Civic Center Expo Hall. More than 1,500 people attended the festive consecration service, and more than 3,500 joined the service by live-streaming video. The presiding bishop of The Episcopal Church, the Most Reverend Katharine Jefferts Schori, led the service as chief consecrator. The Rt. Rev. John McKee Sloan, bishop of Alabama, was the preacher for the service.

Banners representing parishes, schools, and diocesan agencies were a part of the procession for the service. Choristers from parishes around the diocese formed a choir of over 150 voices, and a children’s chorus also sang. Three organists from parishes in the diocese provided music before and during the service. Following the service, the Excelsior Band led worshippers from Expo Hall to Christ Church Cathedral for a celebratory reception.

The consecration service may be viewed at the diocesan website.

On Sunday, July 26, the newly-consecrated bishop was formally welcomed and “seated” at Christ Church Cathedral in Mobile at the 10 a.m. service. During the course of the service, the new bishop received a number of gifts from the cathedral and was seated in the cathedra or bishop’s chair that is symbolic of the bishop’s office. While Kendrick was being seated at the cathedral, Jefferts Schori led worship at the Episcopal Church of the Good Shepherd in Mobile.

Kendrick was elected bishop of the Episcopal Diocese of the Central Gulf Coast on Feb. 21, 2015. Prior to his election, he was the rector of St. Stephen’s Episcopal Church, Birmingham, Alabama, a position he held since 2007. In 1984, he earned a Bachelor’s in architecture and a Bachelor of Science Degree in business from Auburn University; and in 1995, he received a Master of Divinity from Virginia Theological Seminary. Russell is married to Robin. They have two children, Aaron and Hannah. He is a native of Fort Walton Beach, Florida.

Kendrick succeeded the Rt. Rev. Philip Menzie Duncan II, who has served as the third bishop of the diocese more than 15 years.

The Episcopal Diocese of the Central Gulf Coast includes southern Alabama and the panhandle of Florida, 63 worshipping communities, and approximately 20,000 members.