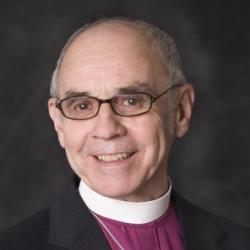 Born on November 15, 1932 in Oil City, Pennsylvania, Bishop Bowman was raised in Canton, Ohio, where he attended Canton Lincoln High school, and graduated from Ohio University in 1955. After serving three years in the U.S. Army, he attended the Virginia Theological Seminary, where he earned a Masters of Divinity in 1960. He was ordained to the diaconate in June and to the priesthood in December of that year.

Upon his retirement in 1999, the Bowmans moved to Shaker Heights, Ohio, where he served for a year as interim dean of Trinity Cathedral, followed by a year as interim bishop of Central New York, while that diocese moved through the process to elect a new bishop. In 2003 he served a year as assisting bishop of Ohio, after which was the interim Dean and President of Seabury Western Seminary in Evanston, Illinois. For the last ten years he has served actively as one of the assisting bishops of the Diocese of Ohio.

Bishop Bowman spent summers in Rangeley, Maine, at the family’s lakeside camp, where he loved to sail, play tennis, and play the banjo and string bass.

He is survived by his wife, Nancy Lou Betts Bowman, whom he married in 1962, and their three children, Ann of Cleveland, Ohio, William (Georgine) of Cincinnati, Ohio, and Sarah Bowman Workman (Jason) of Cleveland, Ohio, as well as two granddaughters, Abigail Bowman and Lucy Workman, and his brother, Richard of Boulder, Colorado.