[Episcopal Diocese of the Rio Grande] Bishop Terence Kelshaw of Albuquerque, New Mexico died in his sleep at home on July 5. He was 78. 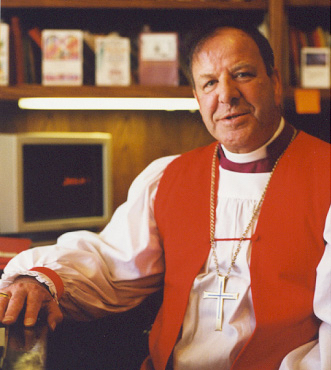 He is survived by his wife, Hazel, and their four children: Julian, Joanne, Rachel and Michael, and their spouses, & nine grandchildren.

A celebration of his life and ministry will be held July 13 at Heights Cumberland Presbyterian Church in Albuquerque. The family asks clergy to vest according to their tradition and process. Rio Grande Bishop Michael Vono and other diocesan officials will attend.

Terence was born in Manchester, England, the seventh of ten children. His passion from a very early age was to serve the Lord, and he was called to be a preacher and teacher at the young age of 15 at a summer camp in the Lake District of England. After serving in Singapore and Malaya in the military he returned to the university, and then went to teach at the Makerere University in Kampala, Uganda, for two years. Just before he left for Africa he met his wife-to-be, Hazel, and they married on his return in 1962.

In 1963 he followed his first calling, and went to seminary at Oak Hill Theological College, Barnet, and earned a Doctorate of Theology in 1967. He was ordained a deacon by the bishop of Bristol in 1967 and to the priesthood the following year. He served his first curacy at a university church, Christ Church in Bristol.

After serving in a suburban church, St. John’s in Woking, and an inner-city church, The Christian Family Center in Bristol, in 1980 he was called to be Associate Professor of Pastoral Theology at Trinity School for Ministry in Ambridge, Pennsylvania, where he earned a Doctorate of Ministry at Pittsburgh Theological Seminary in 1986.

In 1989 he was elected dishop of the Episcopal Diocese of the Rio Grande and consecrated on March 4, 1989. According to the history of the diocese, as bishop “he decentralized some of the financial decision making of the diocese into the hands of the four deaneries, and also set a conservative agenda for the diocese. Funds were withheld from the national church, which mirrored the bishop’s and many others’ growing alienation. When issues of sexuality came to the fore, Bishop Kelshaw was highly visible, both locally and nationally, as a strong proponent of traditional values.

“Bishop Kelshaw was among the bishops who filed a presentment against retired Bishop Walter Righter for the ordination of a man in a same-sex relationship, and he was a vocal opponent of the election of V. Gene Robinson as Bishop of New Hampshire. By the end of his administration, Kelshaw had ceased to attend meetings of the House of Bishops, which increased the alienation of the diocese from the national church. By his retirement in 2005 the diocese was perceived as one of the most conservative in the church. After his retirement, Bishop Kelshaw left the Episcopal Church for the Anglican Church of Uganda.

His family’s obituary remarks that: “He will be remembered for the way he brought Scripture to life using his incredible knowledge of the Word. He served the Lord with great resolve teaching others about the love of Christ. The Bishop surrounded himself with children at the close of services to pronounce the blessing, a trademark of his love for the young ministers of the church. He will be greatly missed by family and friends.

“Terence has run the race with courage and perseverance, keeping his eyes on Jesus, his Savior and Lord. Now he has obtained his athlete’s crown, and is with the saints in glory. Praise God.”

Contributions may be made in lieu of flowers to Trinity School for Ministry, Kelshaw Student Scholarship Fund at 311, Eleventh Street, Ambridge, PA 15003.