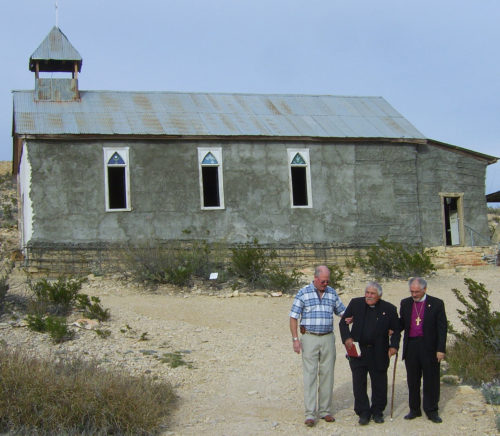 [Episcopal Diocese of the Rio Grande] The Rev. Melvin Walker La Follette was born in Evansville, Indiana, in on September 7, 1930. He lived all of his childhood in Ridgeville, Indiana. His father, Melvin Lester La Follette, was an electrician for the local telephone company who lost his job during the Great Depression. Because of this, his mother, Genevieve Farr La Follette, found employment as the first grade teacher at the Grant County Elementary School. For many years, her guidance shaped young Melvin.

After graduating high school in 1948, he then served his summers in U.S. Forestry Service. He became frustrated with his mother when she refused to grant him permission to join an elite band of men known as the smoke jumpers. He had to compromise with her and remain part of the ground crew. He assisted in the Mann Gulch Montana fire of 1948 where 13 smoke jumpers suffered a terrible tragedy. He reconciled with mother shortly after that event. 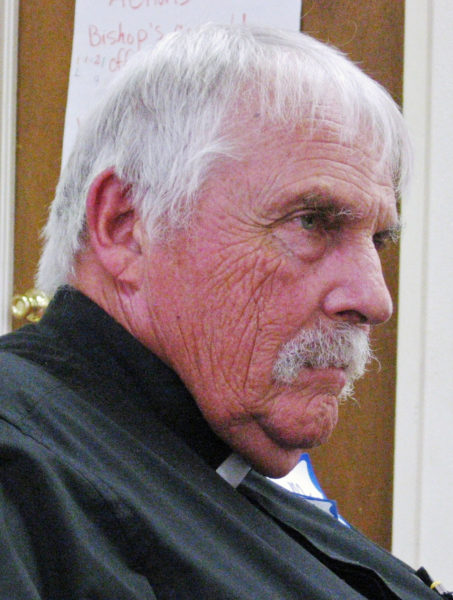 The same year he was accepted to Purdue University until the Korean war broke out, and he enlisted in the U.S. Navy and served as a member of the medical corps. He served in a recovery ward for men wounded overseas.

After leaving the Navy, he received a Bachelor of Arts Degree from the University of Washington. He then returned to graduate school where he attended the University of Iowa’s Writing Project. He received a Master’s Degree in Literature and Creative Writing. It was there that he was instructed by the poet John Berryman, who became an important influence in his decision to become a professional writer.

To support his writing, he accepted a position at the University of British Columbia. There he was sought out by Dylan Thomas, a fellow poet, to be his guide in the Columbian Rockies. La Follette continued writing short stories and poems that appeared in Poetry Magazine, the Beloit Poetry Review. Dame Marianne Moore encouraged his modernist style, although some critics disliked his adherence to formal styles like the sonnet and the ballad, but he himself considered his work surrealistic because most of his poetry had deeper dreamlike imagery mingled with adherence to traditional writing styles. He believed that poets should not abandon tradition just for the sake of modernity.

In 1957, he accepted a teaching position at the Oregon State University. It was there that he courted and married Alice Louise Simpson  in 1958, with whom he shared 26 years of marriage.

He then moved to San Jose, California, where he continued writing poetry and co-founded a small short-lived publishing company, The Spensarian Press.

While an instructor at San Jose State University, he attended The University of California doctoral program. There he made a close personal friendship with fellow poet Allen Ginsburg. He enjoyed listening to beatnik poetry on occasion, but La Follette preferred a formal style of verse for his own writing. He was also dismayed by the abuse of drugs that was passed off as part of the creative process. For this he penned Elegy To A Beatnik, a precautionary poem in free verse.

In 1962, his son Stephen was born. At that same time, he felt a tremendous calling from God to do more for his fellow man. After being examined and accepted by a committee led by Bishop James Pike, he left the University of California without receiving his doctorate, vacated his seat at San Jose State University, and moved his growing family to New Haven, Connecticut.

To support himself during seminary, he taught undergraduate courses at Yale and also worked as a hotel clerk. He also continued writing poetry and prose, although the majority of his time was spent studying in seminary. While at seminary, a second child Joseph was born in 1964.

After being ordained a deacon in 1966 and later a priest in 1967, he was assigned as a curate at St. Peter’s Episcopal Church in Auburn, New York. His duties included a prison ministry, and chaplaincy at the local hospital.

During most of his adult life, he was a member of the civil rights movement and worked to end discrimination against minorities. He joined in many anti-war and civil rights marches in Washington, D.C., while still a seminarian.

He then returned to California where he accepted a position as associate rector of St. Francis Episcopal Church in San Jose. While participating in his duties, he came across ancient manuscript that had an intriguing story of a heroic enchanted wolf. He decided to write an adaptation, which he worked on whenever his creative juices were flowing.

In 1971, he accepted the challenge of turning a storefront mission into a full-fledged church. He became the vicar of St. Patrick’s Episcopal Church in Santa Rosa, California.  Unfortunately, this position was plagued with obstacles, but despite these he was true to his word and secured land and financing for the growing parish.

He tried to include an Hispanic congregation and seriously learned Spanish to start a ministry. Unfortunately, his diocesan leadership didn’t see eye to eye with him. He then considered a position in Ecuador, but he could not convince Alice to leave the United States.

Meanwhile, after years of reworking his manuscript, he found to his dismay that his literary agent could not get any publishers interested in his unique manuscript. He was offered many writing jobs, but he was an artist and turned them down.

At the same time, he had a falling out with his bishop and left active ministry in 1978 ,but not before finalizing plans to build the church.

Being a talented educator, he secured a dream job at Chapman University as a PACE professor for the U.S. Navy. While instructing sailors aboard ship, he traveled the Pacific and Indian oceans. Although he was not active duty he was awarded an expeditionary medal for his work on the USS Midway during the Iran Hostage Crisis. He recounted that Iranian fighter planes tested the ship’s defenses, and at one point a rescue operation failed when it was shot down over Iran.

In the 1983, he left his teaching job at Chapman University to be closer to his elderly father in Roswell, New Mexico, while he finalized his divorce to his wife, Alice. She finally had had enough of his absenteeism and when he offered to once again settle down, she recanted until she discovered it meant moving to the Philippines.

While in Roswell he began attending St. Stephen’s, he began to rediscover his love of the ministry. The people of that parish gave him encouragement to seek another position in the Episcopal Church.

Soon after he took a job at University of Texas at El Paso and began helping out in the Hispanic ministry at the Pro-Cathedral of St. Clement. He was offered the opportunity to fill in for his friend Father William Muniz.

For Father Mel, the community that he served, the distances he had to travel, and the tremendous obstacles that he faced were all fair game.

In 1984, he was installed as canon of the Trans Pecos. With that he became the circuit-riding priest of the Rio Grande. He enjoyed serving at St. Paul’s of Marfa, St. James of Alpine, and he especially enjoyed the parish of Saint John’s in Terlingua Ranch. He felt at home whether in an air conditioned parish hall or a tiny chapel crammed with sweating but happy people waving their paperback Prayer Books to keep cool.

He also worked with the Diocese of Northern Mexico and provided opportunities to seminarians from Monterey to assist in Vacation Bible School. He held VBS in Ojinaga, Palomas, Lajitas and Boquillas Del Carmen.

Every Christmas he provided a fiesta for the children of each and every parish, which included gift bags of fresh fruits and nuts, toys, household goods, clothing and a piñata hand stuffed by himself. When his white truck came down the road during Christmas time, there was a dash to the mission. He would get home early in the morning and then do it again.

For a while he even rode a horse to some out of the way places, although he preferred riding in a rowboat. He had a growing ministry that had the rhythm of a living poem.

Starting in 1985, he compiled a collection of poems titled, Tales From The Indian Ocean, about life on a ship during the Iran Conflict. Once again, he encountered friends lost under tragic circumstances and sought to preserve a part of their memory in poems.

In 1988, he purchased a small travel agency in Presidio. He hoped to grow the business into a pathway for active retirement. But to his dismay, the way people book vacations was rapidly changing.

In 1990, Texas A&M named him rural minister of the year. He was interviewed in many news articles and was the subject of two episodes of the Texas Country Reporter.

In 1992, he tried to expand his role to rural development and helped a group of local farmers try to make a dairy goat cooperative. Father Mel was completely heartbroken when young shepherd Esequiel Hernandez was shot by U.S. Marines while tending goats. He traveled to Washington, D.C. one last time to demand justice.

In 1998, weakness from the early stages of heart disease and arthritis prevented him from a more active role so the cooperative was dissolved.

He retired to his trailer on a small tract of land. Some of his hobbies included poultry husbandry, bird-watching and horticulture. He continued to travel throughout the Caribbean in a small sailboat and second class train in South America.

He continued part time in the ministry mainly serving the parish of St. Joseph and St. Mary in Lajitas, Texas.

In later years he spent a significant amount of time writing an historical novel set in the era of the Republic of Texas. He insisted on finishing his book with a feverish pace because he knew he had congestive heart disease. Just weeks after finishing his manuscript, he called the paramedics when he no longer could tolerate his untreated condition.

He passed away on July 4, 2015, in Odessa, Texas, of heart failure. He is survived by his brother James (Ruth), sons Stephen and Joseph (Erica), and seven grandchildren, Christopher, Christin, Jacob, Jason, Josiah, Leila and Leslie.

A requiem remembrance will be held July 23 at Santa Inez Church in Terlingua, Texas. Diocese of the Rio Grande Bishop Michael Vono will officiate.