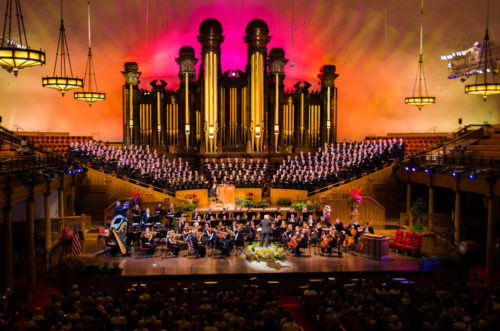 The golden pipes of the Tabernacle organ make a backdrop for the American Festival Choir and Orchestra. Diocese of Utah/Chloe Nguyen

[Episcopal News Service – Salt Lake City] The Kenshin Taiko drummers from the Japanese Church of Christ in Salt Lake City got the July 1 Utah Showcase off to a thunderous start with a reverberating opening number representing a dragon wishing listeners a long life and good health.

The evening came to an equally powerful end with a performance by the 220-voice American Festival Choir and Orchestra, whose program of hymns included a famous one by frontier-era Mormon composer William Clayton, “Come, Come, Ye Saints.”

In between, there were choral performances by the Calvary Baptist Inspirational Choir; the Lux Singers, a religious ensemble in residence at St. Mary’s Episcopal Church in Provo; and El Coro Hispano, a choir from the Roman Catholic Cathedral of the Madeleine that sings traditional religious music of Mexico and Central and South America. 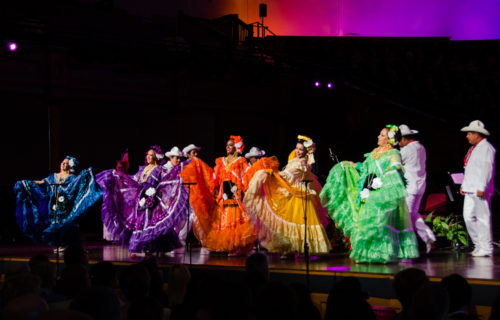 Ballet Folklorico Citlali performed several traditional Mexican folk dances. The men, wearing white from hat to toe, did intricate tap-style stepwork, while the women, in vivid frilled finery, swirled in a kaleidoscope of color around them.

Then the Pow Wow Family, whose members represent Ute, Navajo, Northern Shoshoni and Hopi tribes, demonstrated a series of traditional dances accompanied by a drum circle.

In the elaborate fancy-dress regalia worn in contemporary powwow competitions, the women and men did dances in Southern Plains and Northern Lakota styles, an Ojibwe jingle-dress dance, an Omaha grass dance and a Blackfoot prairie chicken dance, among others. The set culminated in a swift showmanship piece derived from Buffalo Bill’s Wild West Show, with a solo dancer improvising to the voices of the drums.

There are 566 federally recognized Native American tribes at present, the Pow Wow Family’s leader told the audience. “We’re still here,” he said as the group left the stage to an ovation. 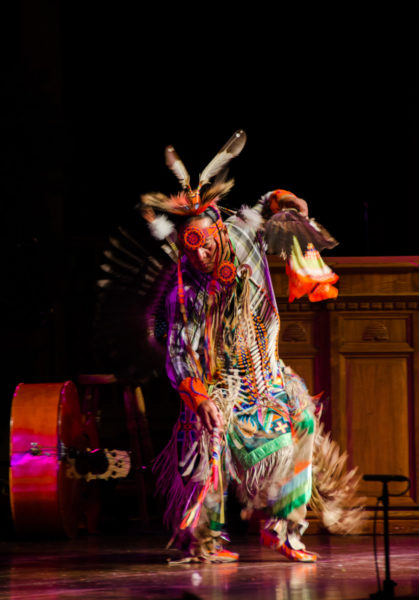 “In addition to religious diversity that visitors may sometimes find surprising, we here in Utah have a strong heritage of cultural and ethnic diversity that enlivens and strengthens our community,” Diocese of Utah Bishop Scott Hayashi said at the beginning of the program. “Tonight we are showcasing this rich heritage.”

The Diocese of Utah organized the nearly two-hour program of music and dance for General Convention-goers. Many of them had rushed from a late-running legislative session to get there.

The showcase was held in Temple Square at the Salt Lake Tabernacle, a historic landmark and home of the famed Mormon Tabernacle Choir. The towering golden structure of the Tabernacle’s 11,623-pipe organ was a dramatic visual backdrop for the performers, all of whom donated their time and talent for the evening.

Elder L. Whitney Clayton, representing the Presidency of The Seventy, one of the senior governing bodies of the Church of Jesus Christ of Latter-day Saints, told the audience that the Tabernacle, built between 1864 and 1867 and known for its pin-drop acoustics, has an arched shape because it was designed by a bridge builder.

“They didn’t have a lot of the things that we would use today to build a building like this, but they had lots of wood, they had rawhide and they had gumption, and those three things put together made a pretty good building,” Clayton said. 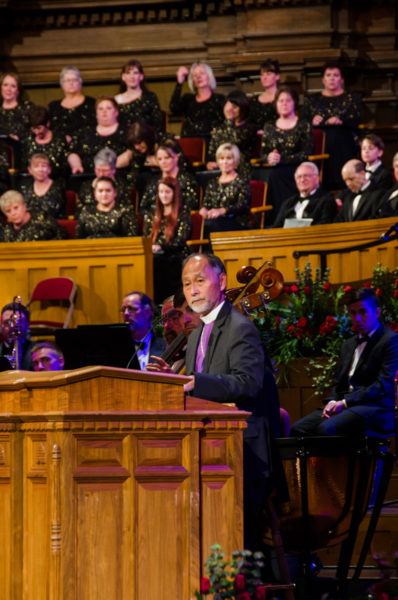 “I think the most important thing about the entire structure is that when the Mormon pioneers arrived here, they came in wagons, they came, some of them, on horseback, but many of them walked. When they arrived here, they started from scratch and built this wonderful city in which we live and which is home to so many of us,” Clayton said.

Clayton offered deep gratitude for Hayashi’s leadership. “I want to recognize him in a very personal way, for his friendship, for his cordiality, for his voice of inclusion and entertainment of other people’s views and ideas. His voice has been so critical to so many good things that have happened in this city and this state,” Clayton said.

“We believe that we are God’s children and that we are truly one family. As brothers and sisters in that family each of us has a wonderful opportunity – indeed, we’d say a divine duty – to treat each other with kindness and respect as we worship the Lord and follow his teachings according to the dictates of our own conscience and our own tradition,” Clayton said. “We pray that God’s blessing will be upon you throughout your convention.”

The American Festival Choir and Orchestra closed the program with “The Lord Bless You and Keep You.”

One audience member was overheard saying as he made his way out the door, “If you don’t feel good after that, something is wrong with you.”