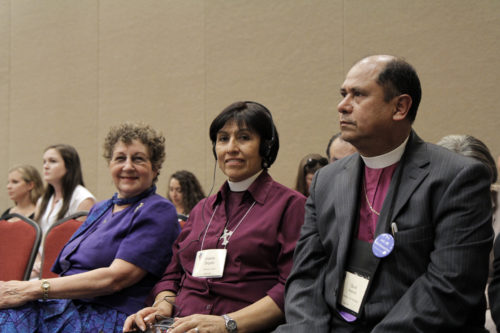 “The Episcopal Church in Cuba, our Anglican Communion partner, is a clear multiplier when it comes to the spiritual, social and physical infrastructure of the country of Cuba, and therefore has the potential to be a significant partner for us as we move forward to enhance our relationships,” he said.

Resolution B003 called on General Convention to “acknowledge and affirm” the Cuban church’s decision to request membership as a diocese, and to identify and address the canonical issues, including offering pensions to clergy, involved with Cuba becoming a diocese.

The decades-long U.S. economic embargo and Cuba’s extra-provincial status has left the Cuban church feeling isolated, said the Rt. Rev. Griselda Delgado Del Carpio during a June 25 hearing on resolutions A053, which was later discharged, and B003 in General Convention’s Legislative Committee on World Mission.

“These have been tough times nationally and in the life of the church,” said Delgado, who became bishop of Cuba in 2010, adding that the last five decades under the embargo and as an extra-provincial diocese have been difficult.

The 78th General Convention could not formally welcome the Episcopal Church of Cuba back into the U.S.-based Episcopal Church during this convention, as such an action requires a study of the constitutional and canonical implications.

Despite the hardship and isolation, however, the Episcopal Church of Cuba has a mature, thriving ministry focused on evangelism, as evidenced in its strategic plan.

“The last decade has been one of creativity: Our churches (are) always open, always in prayer, and expanding in spirituality, and always believing we belonged to a larger family,” said Delgado during her testimony. “We, after these years, feel mature and solid in every aspect.

“We have an identity as a culture. And the Cuban people work with society, especially children and youth, focusing always on mission training for laity and clergy, and always preparing lay people so that they can become formed in Christianity. I believe that with our human resources and spirituality, we have something to offer the rest of the church.”

Resolution B003 also calls on the church to seek to strengthen relationships with the goal of creating “greater understanding and fellowship,” and that such efforts “seek to promote mutual ministry and understanding through cultural exchange, prayer, worship, fellowship, education, and humanitarian work – identifying and facilitating specific opportunities for exchange, including, but not limited to, travel so that an exchange may occur between Cuban and North American Episcopalians.”

The embargo and the strict travel restrictions didn’t stop some Episcopalians from the United States from organizing mission trips and traveling on religious visas to the island, the largest and most populated of the Greater Antilles.

For example, during her June 25 testimony in regard to strengthening the relationship between The Episcopal Church and the Episcopal Church of Cuba, the Rev. Yamily Bass-Choate, an alternate from the Diocese of New York and its missioner for Latino and Hispanic Ministry, described the personal impact of visiting Cuba.

“I went to Cuba 12 years ago and met Griselda when she was a priest. She had seven churches, and was my inspiration. For the last six years I have led 16 to 20 teens to Cuba every year. We have done little work but they have loved us,” said Bass-Choate.

“Our Episcopal Church of Cuba needs our support,” she said. “It is a magnificent church and they do a fantastic job. The ministry has transformed my life and my ministry. It is our church, we need to open our hearts and our doors to the diocese of Cuba.”

The warming of relations between the U.S. and Cuban governments, and the anticipation that the U.S. economic embargo imposed on Cuba could be lifted, has sparked new hope in the church.

On Dec. 17, 2014, President Barack Obama ordered the restoration of full diplomatic relations with the Cuban government, more than half a century after the United States severed relations with the communist government of then-President Fidel Castro. Prior to the Castro-led Cuban revolution, U.S. companies owned huge shares in Cuba’s economy, infrastructure, and utilities, and imported 90 percent of its sugar. Cuba is just 90 miles from Key West, Florida, and historically was a popular tourist destination for Americans.

In 1960, the United States placed an embargo on all exports to Cuba except food and medicine; by 1962 the embargo covered all imports and exports. Following the Cuban Missile Crisis, President John F. Kennedy imposed travel restrictions on Feb. 8, 1963. Despite a loosening of some travel and trade restrictions following Obama’s December announcement, the embargo cannot be lifted without congressional action. In February, the U.S. Senate introduced legislation to lift the embargo.

“The Episcopal Church has called for the lifting of the embargo before but nothing has happened to the suffering of the Cuban people that we in America are creating. I believe it is time now for this to happen. We are continuing our failed policies of 50 years ago,” said retired Bishop Leo Frade during a June 24 hearing of the Legislative Committee on Social Justice and International Policy. Frade was born in Cuba. “We are losing billions of dollars. … It will be ridiculous if this General Convention doesn’t make a statement about the question of the embargo. This injustice is created by the USA and we have been doing it for five decades. … it’s time to stop it.”

The Rev. Jose Luis Mendoza–Barahona of the Episcopal Diocese of Honduras, member of the international policy committee, spoke June 25 on behalf of lifting the embargo.

“About three years ago I went to Cuba and I was able to witness the suffering, the pain and limitations the Cuban people are experiencing. I believe our committee has created too many expectations. … We need to demand that both governments support the lift(ing) of the embargo. The Cuban government has imposed an internal embargo against its people and they are not free to have relationships with other countries … So I would like our committee to support this resolution,” he said.

Two currencies exist in Cuba, the peso and the convertible peso; the latter is used by foreign visitors and has a U.S. dollar equivalent. Professionals, such as doctors and lawyers, earn the equivalent of $20 per month.

Lifting the embargo, for the church, would mean more money for mission and ministry; for the Cuban people, “it would signify a radical change,” said Delgado during an interview with ENS. “First of all, both countries would be in closer relationship.”

Specifically, in terms of the Cuban church, she added, funds could be transferred directly to Cuba rather than routed through Canadian banks at a 10 percent fee.

For clergy ordained in Cuba before 1966, the embargo eliminated their pensions, explained Delgado; a few years ago, those still living began to receive some pension money. Clergy ordained since 1966 are not part of a pension plan.