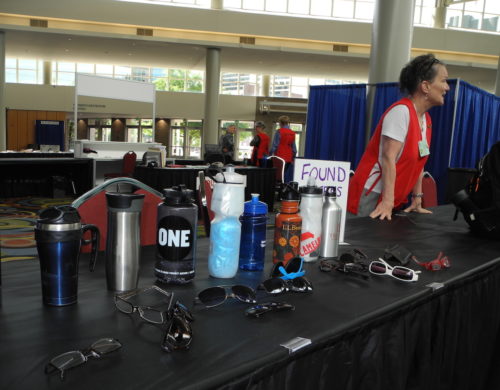 Volunteer Charlotte Alexandre of Thornton, Colorado, calls out to attendees of the 78th General Convention as they make their way into the Salt Palace July 2, urging them to pick up any items they or friends may have lost since convention began. She said the items on the table are only a fraction of the things that volunteer sweeps have gathered after hours. The items include glasses, water bottles, jewelry and small electronics. Photo: Lori Korleski Richardson

One of the highlights of daily worship at General Convention occurred July 2, when Dominican Republic Bishop Julio Holguín presided, Haiti Deputy France Euphonise Vixamar read the second lesson and the Rev. Colin Mathewson of the Diocese of San Diego preached about the mistrust and deportation of Haitians occurring in the Dominican Republic, recounted the Rev. Sandy Webb of West Tennessee, one of the convention’s liturgy planners.

“The symbolism was that, in The Episcopal Church, all of those constituencies are represented, and that we can stand together at the Holy Table.”

All the services were designed to show the breadth of the church’s membership, even while highlighting different cultures, he said. The July 2 Eucharist, for example, emphasized Hispanic and Latino cultures but included someone reading in French and a child on the worship platform, showing other faces of the church.

For all except the Sunday Eucharist with UTO ingathering, 75 minutes is set aside for the daily Eucharist, and the worship team tries to complete the service within an hour, Webb said. “General Convention is just so frenetic, so when I can say, ‘Here’s 15 minutes that you didn’t know you had,’ it’s real Sabbath, which is just wonderful.”

That extra time also allows musicians assisting at the service to provide an impromptu post-Communion concert. On July 2, worshipers gathered around the choir and instrumentalists, clapping, singing and dancing during several spirited songs in Spanish before dispersing for the day’s morning legislative session.

The House of Deputies on July 2 passed resolutions C045, “Environmentally responsible investing,” and A030, “Create ‘Task Force’ on Climate Change,” the latter being modified to create an advisory committee, concurring with the House of Bishops.

Bishops voted to amend Resolution C045, one of four resolutions that called for fossil fuel divestment, to remove the Church Pension Fund from the resolution. An amendment introduced in the House of Deputies that would have removed the Episcopal Church Foundation from the resolution failed.

In testimony for the resolution, the Rev. Kirk Berlenbach, a deputy from Pennsylvania, said that with less than 10 percent of the church’s investments in fossil fuels, spread out over companies and funds, shareholder advocacy would be minimal.

Deputy Henry Baer, who serves as the treasurer of the Diocese of Oklahoma, testified against concurring with bishops on C045, explaining that 37 percent of its diocesan budget comes from royalties and dividend payments on a bequest of mineral rights and stocks in oil and gas. Half of that money is used to support rural and other missions, he said.

Resolution A030, which originally called for the creation of a task force, but was modified to call for the creation of a climate change advisory committee with one representative from each of The Episcopal Church’s nine provinces, and that also calls on each province to create a Regional Consultative Group composed “of no fewer than five experts in areas of environmental sustainability appropriate to the demographic, ecological, cultural and geographic specifics of each region,” passed without opposition testimony.

As part of the sustainability plan, the Domestic and Foreign Missionary Society recently awarded a one-time focus grant totaling $950,000 to the Diocese of the Dominican Republic.

Since 2013, the Domestic and Foreign Missionary Society has been working with all Province IX dioceses – the Dominican Republic, Ecuador Central, Ecuador Litoral, Colombia, Venezuela, Honduras and Puerto Rico – to develop a plan for financial self-sustainability to further secure mission and ministry.

“The staff has been very good and very helpful to our diocese in providing the support necessary to complete the grant process. We are very grateful for the advice and counsel they have offered us,” said Dominican Republic Bishop Julio Cesar Holguín Khoury, following the distribution of the focus grant. “I think the experience with us regarding the process will serve as the basis for monitoring the Second Mark of Mission in the other Province IX dioceses.”

Closing worship to have element of déjà vu

The closing Eucharist on July 3 will bring a déjà vu moment for the Rev. Sandy Webb of West Tennessee, one of the convention’s liturgy planners. He first met Presiding Bishop Katharine Jefferts Schori in 2003 when she was bishop of the Diocese of Nevada and then-Presiding Bishop Frank Griswold invited her to celebrate a convention Eucharist.

“They were on the platform side-by-side then as they will be tomorrow,” he said.

“I, in a quite literal way, have grown up running worship in the General Convention,” said Webb, rector of Church of the Holy Communion in Memphis, whose founding senior warden was a 17-time deputy, Charles Crump.