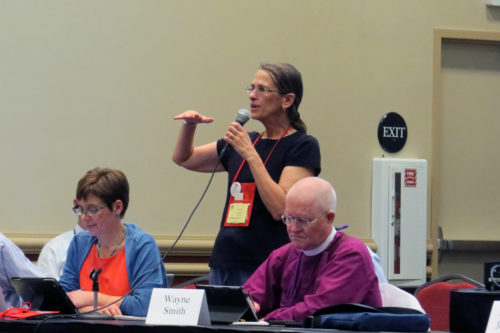 [Episcopal News Service – Salt Lake City] General Convention approved making available a revised resource for calendar commemorations but stopped short of officially authorizing it as a liturgical resource for use in the next triennium. Amended Resolution A056 also establishes criteria to use when considering additions to the resource, “A Great Cloud of Witnesses: A Calendar of Commemorations,” and directs the Standing Commission on Liturgy and Music to review all the names within it in light of these criteria, reporting back any revisions and explanations for them to the next convention.

SCLM will use those same criteria to review commemorations and their accompanying collects added to the resource via A055 and to review suggested additional commemorations outlined in A057. The latter resolution includes the names of more women for possible inclusion in response to previous General Convention directives to increase the number of women commemorated in the church calendar.

“Great Cloud of Witnesses” revises and replaces a previously authorized resource, “Holy Women, Holy Men: Celebrating the Saints.” Created as part of a major revision of “Lesser Feasts and Fasts,” the church’s commemoration of various saints and occasions not included as major holy days on the calendar of the Book of Common Prayer, “Holy Women, Holy Men” added many new commemorations and was approved for trial use by the 2009 and 2012 conventions.

With the passage of the amended A056, “ ‘Lesser Feasts and Fasts’ continues to be the authorized supplemental calendar of commemorations,” said SCLM Chair the Rev. Ruth Meyers. “ ‘Great Cloud of Witnesses’ will supersede ‘Holy Women, Holy Men.’ ” It will include everyone that had been in “Holy Women, Holy Men” – including commemorations originally proposed for deletion in A055 but later restored for review under the new criteria.

But how precisely the new resource will be made available remains to be determined.

“The commission will need to work with the General Convention office to determine how to make (it) available,” Meyers said.

An additional resource for trial use was approved via A056: “Weekday Eucharistic Propers 2015,” containing all of the seasonal collects and lessons previously contained in “Lesser Feasts and Fasts” and “Holy Women, Holy Men.”

Dividing these propers from the other commemorations means creating two books of more manageable size for liturgical use and, with the “Eucharistic Propers,” creating a longer-lasting volume because the propers, unlike calendar commemorations, do not change, Meyers told ENS before the convention.

“Great Cloud of Witnesses” includes “tags” for different aspects of saints’ lives that those using the resource might want to emphasize about a commemorated individual – such as martyr, pastor or bishop – and expands the Scripture options for the commemorations.

The House of Bishops had approved the Prayer Book, Liturgy and Music legislative committee’s version of A056, which would have authorized “Cloud of Witnesses” for use during this triennium. But it ran into trouble in the House of Deputies, who approved the amended version that merely makes it available as a resource. Because it was amended, the resolution returned to the bishops, who concurred on July 1.

Describing the resource as “the next step in the development of the church’s calendar of commemorations,” Meyers told the House of Deputies on June 29 that “in 2003 the General Convention directed the SCLM to undertake a revision of ‘Lesser Feasts and Fasts’ to reflect our increasing awareness of the importance of the ministry of all people of God and the cultural diversity of The Episcopal Church and the wider Anglican Communion and its ecumenical partners.”

After receiving feedback from across The Episcopal Church on “Holy Women, Holy Men,” she said, “Great Cloud of Witnesses” was developed “as a kind of family history of persons worthy to be remembered.”

Ohio Deputy the Rev. Jeremiah Williamson, a member of the legislative committee, opposed concurrence on the floor, saying adoption would establish “a set of criteria that fundamentally shifts our understanding of sainthood and baptism.”

He objected to paragraph 2, criteria 2, which changed the understanding of saints as “people made holy through their mutual participation in the mystery Christ.

“It defines holiness as a kind of good works; something earned rather than given us by God,” he said. “While there are certainly women and men outside the Christian church that are good people and do amazing things to better our world, they have often by their own choice not been baptized into the church. Therefore, it seems inappropriate to place them in the church’s calendar.”

Deputy Benjamin Shambaugh of Maine, chair of the legislative committee’s subcommittee on the calendar, said, “There are a variety of interpretations of sainthood.

“ ‘Cloud of Witnesses’ is the next evolutionary stage of ‘Lesser Feasts and Fasts’ and ‘Holy Women, Holy Men.’ It is a catechetical as well as a liturgical resource. It does, as pointed out, include criteria for inclusion against which all of those names will be judged and then those revisions will be brought to the next convention’s suggestions for revision.”

Deputy Melody Shobe of Rhode Island introduced the amendment, replacing the words “authorize in the next triennium” with “make available for publication and distribution by individuals and in congregations and in other church groups for devotional or catechetical use or use in public worship subject to the provisions for optional commemorations of page 18 of the Book of Common Prayer.”

She noted that The Episcopal Church is not of one mind about saints. “There are some who yearn to retain a core calendar and others who want to widen it. This helps us to balance that in a middle way,” she said.

Deputy Dante Tavalaro, also of Rhode Island, supported the amendment, saying that it spoke to the Episcopal ethos of “both-and” as opposed to “either-or.”