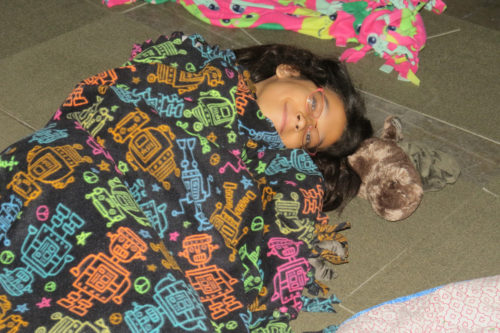 Zofia Graham, 10, of San Antonio, Texas, snuggles up in a blanket on the floor in the children’s area of the General Convention worship space before the opening Eucharist. Photo/Sharon Sheridan/Episcopal News Service

The hot topic of debate on the morning of July 1 among the General Convention participants who have taken over the second floor meeting rooms at Salt Lake City’s Marriott Downtown was chocolate pudding.

The specific question at hand: Can we have more, please?

It was snack time at the children’s program, which has been serving about 20 to 30 infants and children through age 12, each day, according to Becky Ball. She is the local Salt Lake City organizer for the program, a collaborative effort between the Diocese of Utah and the Domestic and Foreign Missionary Society’s Office of Lifelong Formation.

“It’s a little crazy at times, but it’s a lot of fun and it’s going really well,” Ball, with a half-opened pudding cup in hand, said during a momentary break in the action.

Under the care of a dozen teenage counselors and as many adult volunteers, the children attend the daily Eucharist, enjoy age-appropriate activities and get to do something many adult convention-goers would be willing to trade their voting credentials for: They take naps. There also are field trips for the older kids. So far they’ve visited Salt Lake’s Museum of Natural History, the zoo and the food distribution ministry at the Cathedral Church of St. Mark.

The program enables parents, who might otherwise not be able to attend General Convention, to participate fully at the triennial gathering.

The program is about more than just childcare, according to its organizers. Its Christian formation component has the children exploring daily Scripture lessons in a hands-on way. Today’s gospel lesson was the parable of the lost sheep, so the little ones were making sheep out of paper plates and cotton balls; the older group was building a LEGO scene from the story.

There has been a children’s program at General Convention since 2006. Having children present, the program’s organizers say, means that the entire church community is present.

For the children, it means fun, learning and prayer — plus pudding.