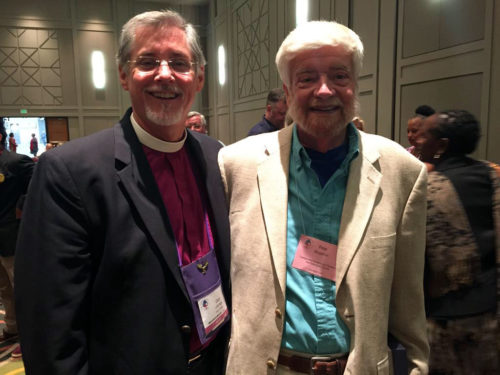 And in a delightful twist at the end of his presentation to the Lillibridges, Prior also gave Canon Peter Bergstrom a Hero of Camping Ministry Award. Bergstrom retires this year as executive director of ECCC, an organization that advocates for Episcopal camps and retreat centers throughout the church.

Bishop Lillibridge grew up attending Camp Capers, the Episcopal camp in the Diocese of West Texas, which former Presiding Bishop Edmund Browning attended. More recently, the diocese acquired property called Mustang Island at Corpus Christi, which has grown into a retreat spot for Episcopal families. Bishop Lillibridge realized that these retreats and vacations encouraged families in their involvement with and commitment to the Episcopal Church, and to their spiritual growth as a family. The Lillibridges understand that the camp experience helps people move from the fringe of the parish into the center, because camp has been an integral part of their own life experience. Under the bishop’s direction, the diocese allocated significant funds to operate and expand Mustang Island. The diocese also developed a wilderness property in Colorado for teen adventures, Duncan Park. Since 2011 Bishop Lillibridge managed the visionary and advocacy council for ECCC; in that role he worked tirelessly to equip camp and conference center staff to be their own advocates in the greater Episcopal Church.

Catherine Lillibridge has been a camper, camp staff, retreat leader, fundraiser and supporter. Her ministry has been a partnership with Bishop Lillibridge throughout their marriage.

Bergstrom said that “Gary and Catherine Lillibridge not only have a lifelong passion for camping and retreat ministry but they truly and deeply understand how important that ministry is to the development of the future leaders of our churches and dioceses.” He also noted that the Lillibridges have invested significant financial support in the ministry of camping “so that it flourishes and therefore the diocese flourishes.”

“Camp is my first language,” said Prior, who was the director of Camp Cross during his 14-year career as a priest in Spokane, Washington. Prior and his wife met and were married at camp. He said that the “camping ministry was foundational in [his] formation.”

Since becoming a bishop five years ago in Minnesota, Prior has grown the Episcopal Church in Minnesota’s camping ministries. He will assume the responsibilities of chairman of the visionary and advocacy council for ECCC when Lillibridge’s term ends.

In presenting the surprise award to Bergstrom, Prior said, “Peter is committed. He’s a legend of camping ministry. He’s second to none in what he’s done for the organization, structure and bringing people in the camping ministry together.”

Bergstrom provided the organization with “vision, direction and leadership development,” said William Slocumb, ECCC director of operations. He credits Canon Bergstrom with shaping his leadership capabilities: Slocumb assumes the role of director of ECCC in 2016.

Ashley Graham-Wilcox, director of communications for ECCC, said she and Slocumb met Bergstrom at Camp Stevens in the Diocese of Los Angeles and San Diego, where he was the executive director for 40 years. He retired in 2012.

“I’ve known Bill Slocumb since he was a young intern at Camp Stevens, right out of college,” mused Bergstrom. “There is nobody that is more open and friendly, and who cares about camps and retreat centers and their staff than Bill. He knows them all, has visited them all and wants to help them thrive in their ministries.”

The Hero of Camping Ministry Award is the brainchild of Bergstrom. In an address to the House of Bishops Bergstrom said, “Summer camp is more important today than ever, as so many children spend most of their waking hours indoors in front of one screen or another. Direct connection to nature, to God’s creation, is important in so many ways, as is really living together with other children from a variety of ethnicities and economic backgrounds.”

The visually striking award, which resembles an ice-carved mountain, has been conferred on three other members of the Episcopal community: the Rt. Rev. Thomas M. Shaw in 2009, and the Most Rev. Katharine Jefferts Schori and Mr. Richard Schori in 2012.

— Hannah Wilder is director of communications for the Episcopal Diocese of San Diego.