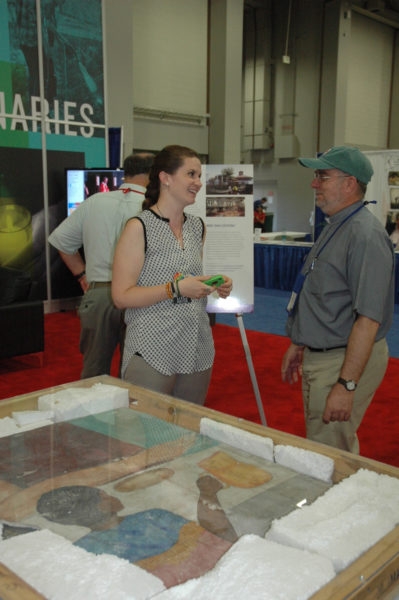 Former Young Adult Service Corps missionary Ashley Bingaman, who served as a music teacher at Holy Trinity’s school from 2012 to 2014, talks with the Rev. David Copley, the Domestic and Foreign Missionary Society’s mission officer. A fragment of “The Last Supper” mural is in the foreground. Photo: Tracy J. Sukraw/Episcopal News Service

On June 30 visitors to the Domestic and Foreign Missionary Society’s booth in the exhibit hall got the chance to view a fragment of “The Last Supper,” one of three surviving murals from Haiti’s Holy Trinity Cathedral, destroyed by earthquake in January 2010.

“The Last Supper” by Philomé Obin is one of the 14 life-sized murals originally painted on the interior walls of Holy Trinity by Haitian artists. In full, it depicted a white Jesus surrounded by disciples of all colors, with Haitian hillsides visible through an open door behind them.

Missioner the Rev. David Copley said the murals were painted between the 1940s and 1960s and were somewhat controversial at first. “They showed Haitians in New Testament stories, and I think that was quite rare at the time,” he said.

He said he’s been moved by visitors’ stories, both about what the mural fragment says to them and what cathedrals can mean to people.

“In this case it’s not just a place for worship but a symbol of hope, for The Episcopal Church and for the people of Haiti,” Copley said.

After the earthquake, a team of conservators working under the auspices of the Smithsonian Institution’s Haiti Cultural Recovery Project removed the surviving murals for preservation. They are to be reinstalled once the cathedral is rebuilt.

The Diocese of Haiti is the largest in The Episcopal Church. Rebuilding the cathedral, and raising the funds to accomplish that, is a significant priority of the Domestic and Foreign Mission Society, according to the exhibit hall display.

General Convention supported the creation of a church-wide network for planting congregations, and training and recruiting planters June 30 when the House of Bishops passed Resolution D005 unanimously and with enthusiastic applause.

Presiding Bishop Katharine Jefferts Schori said the house doesn’t normally encourage applause “but I cannot imagine there would be anyone in this church who’d be opposed to this.”

All bishops who stood spoke in favor of the resolution.

Bishop Prince Singh of Rochester said he is “heartened by this resolution. I feel that it has teeth and traction to take us forward. I notice there is a mention of Latino and Hispanic congregations. I hope we will keep in mind that there are migrant groups that are coming into the U.S. and see the potential there for real vitality and growth in the church.”

Bishop Diane Bruce, suffragan of Los Angeles, said she stands to support the resolution with “ecstatic joy. We have been the recipient of Mission Enterprise Zone grants and it has been such an amazing shot in the arm – in the best way, especially for multicultural and multilingual congregations that are so needed in our church right now.”

In 2012, the General Convention allotted $2 million to help dioceses establish Mission Enterprise Zones and support new church starts as part of The Episcopal Church’s commitment to the first of the Anglican Communion’s Five Marks of Mission: to proclaim the Good News of the Kingdom.

While Resolution D005 called for an increase of this triennium’s $2 million in funding to $5 million for the 2016-18 triennium, General Convention has not yet passed that triennium’s budget and therefore the exact amount of funding is not yet known. The budget will be presented to a joint session of House of Bishops and House of Deputies the afternoon of July 1.

A series of ENS articles about the Mission Enterprise Zones is available here.

When vestment maker Colleen Hintz arrived to set up her Fruit of the Vine booth in the Exhibit Hall at General Convention, she stopped at Target to buy a table and chairs for her stall. She said she was thrilled to discover that, when the hall closes, she can donate them to Our Store, a local thrift shop that supports a Utah AIDS ministry. “Instead of putting it in a dumpster somewhere, it will go for good use.”

She said she particularly was pleased that her donation would help people with AIDS because her home parish, Church of the Redeemer in Morristown, New Jersey, supports the Eric Johnson House, a transitional housing program for people with AIDS located in the church’s former rectory.

Exhibitors can donate used furniture and other items for the thrift shop at the Diocese of Utah exhibit booth once the hall closes at 3 p.m. July 1, said Vicki Evans, booth co-coordinator. “The Diocese of Utah movers are going to load it up and deliver it.”

It’s a helpful solution for many exhibitors who choose to buy rather than rent furniture and other items for their booths, she said. “To rent things for an exhibit booth here is just so expensive, and most of us are nonprofits. 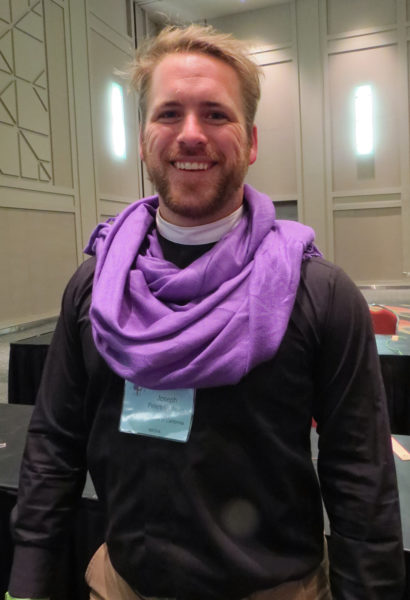 The ever-colorful assemblage of General Convention sported more purple than usual as some participants donned purple scarfs to show their support for increasing the number of female bishops.

“The purple scarfs started through ‘Breaking the Episcopal Glass Ceiling,’ a new Facebook organization,” said Episcopal Women’s Caucus President the Rev. Terri Pilarski. The intent is to remind people of women’s ordinations, “particularly trying to lift women up to the role of bishop,” she said.

Not only are there few women bishops, but also fewer women willing to enter the bishop-election process, she said. “We’re trying to find ways to support women to enter into that process” – and also to support them afterwards if they are not elected.

Some women who have been through it “have found the process to be really brutal and sexist, and painful,” she said. “It’s always hard not to be the winner, but it shouldn’t be debilitating.”

“If we can get men to wear purple scarves and men to support the process … we will have a paradigm shift in our awareness, and that will really help,” she added.

Among the men sporting a purple scarf on June 28 was Joseph Peters-Mathews, communications officer for the Diocese of California. The diocesan canon to the ordinary, the Rev. Stefani Schatz, is among the purple-scarf campaign organizers and is posting a Facebook album of scarf wearers, he said.

Deputy demographics: Johnsons abound; deputies getting younger
President of the House of Deputies Gay Clark Jennings announced June 29 that the most common last name of deputies is Johnson and said that deputy demographics are changing. The oldest deputy is 90 and the youngest is 17, and many more deputies are under 30 than at any other General Convention, news that was greeted with applause. Males still slightly edge out females by a margin of 51 to 49 percent. Jennings also offered a breakdown of deputy racial and ethnic demographics:
77 percent are Caucasian;
9 percent are black, African-American or African;
7 percent Hispanic or Latino;
3 percent are indigenous, Native American or Native Pacific Islander;
3 percent are Asian; and
fewer than 1 percent are mixed race or unspecified.

According to Jennings: “There is an increase in the number of deputies of color but the chair would also acknowledge there is room to improve.”

Deputies approve C048, hiking minimum wage to $15
Deputies on June 29 approved a resolution continuing support from previous conventions for advocacy and policies to provide a living wage, and advocating for an increase in the hourly minimum wage to $15 per hour.

Deputy Sarah Lawton of California, development coordinator for the University of California at Berkeley’s Labor Center, spoke in support of Resolution C048. She told the gathering that raising the minimum wage doesn’t lead to job loss but rather stimulates the economy and productivity. She said the moral question is, “In this gulf between those who are well off and those who are really struggling, where will the church stand?”

Deputy David Sevigny of the Diocese of Lexington opposed it because “it fails to address our own stewardship. My guess is that many of the church structures have employees paid much less than $15 per hour. So please, please we cannot point out the speck in the eye of our government until we pull the log out of our own.” 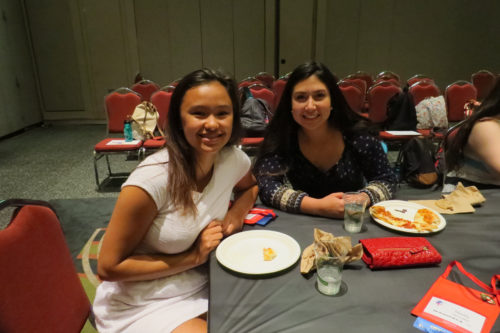 Sydney Norman, 17, left, and Maddy Gonzales, 16, are part of the Official Youth Presence at General Convention 2015. They and the rest of their 18-member group recently joined House of Deputies President the Rev. Gay Clark Jennings for lunch and to learn more about the workings of General Convention. Photo: Sharon Sheridan/Episcopal News Service

The 18 members of the Official Youth Presence joined House of Deputies President the Rev. Gay Clark Jennings for a pizza lunch on June 28 as part of their quest to learn about and participate in General Convention.

The members – two from each province – have seat and voice in the House of Deputies and can participate in committee hearings and floor debates.

“They bring energy. They bring their own unique perspectives” to the convention, Jennings told ENS. “I’m very grateful for their presence and all they bring to the house.”

The program, she said, “really builds leadership capacity and formation in this particular way in the life of the church.”

The deputies’ parliamentarian, Brian Krislock, was a member of the youth presence at the 2000 General Convention in Denver. “It’s an incredible experience for a young person,” he said. “The seriousness with which they take it is very impressive.”

When he participated, “It wasn’t just a fun two-week trip. It was very intentional participation in the life of the church.”

Maddy Gonzales, 16, of the Diocese of Olympia applied to become a member of this convention’s youth presence after attending her diocesan convention as a delegate, which she said was unusual for a young person in her diocese. “I wanted to see the broader church and experience that,” she said.

The biggest things she has gotten from participating, said Sydney Norman, 17, of Minnesota: “I’ve learned the importance of faith in my life and how important it is for me to continue that.”

Digital Evangelism Initiative resolution approved
Deputies approved Resolution B009 on June 29, which directs the staff of the Domestic and Foreign Missionary Society to develop and conduct a digital evangelism initiative … “for the purpose of meeting the demand online for the gospel of Jesus Christ through the ministry of the Episcopal Church,” including building and maintaining a database of prospects, and cultivating those prospects via email, social media, blogs, and other means. The resolution also provides for partnerships with dioceses “to refer qualified prospects to local congregations, church plants or other appropriate ministries.”

Deputy John Crossen of Delaware, a marketing manager at QVC, said of the digital campaigns proposed in the resolution: “This is a Pentecost moment for the church, to have the opportunity and the call to reach people where they are, often in front of their screens.”

The Executive Council carries out the programs and policies adopted by the General Convention, according to Canon I.4 (1)(a).  It currently comprises 38 members, 20 of whom (four bishops, four priests or deacons and 12 lay people) are elected by General Convention and 18 (one clergy and one lay each) by the nine provincial synods for six-year terms, plus the presiding bishop and the president of the House of Deputies.