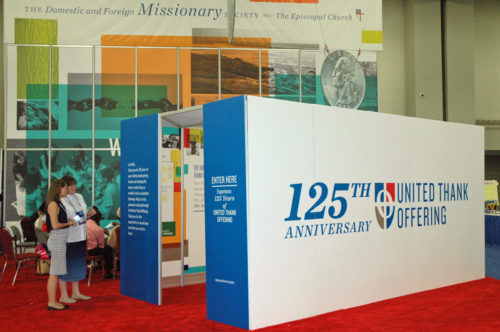 A gigantic blue offering box appeared at the Domestic and Foreign Missionary Society’s booth in the General Convention exhibit hall on June 28, in celebration of the United Thank Offering’s 125th anniversary. Inside the box, visitors can enjoy displays about the UTO’s history and post messages on the wall about things for which they are grateful. Photo: Tracy J. Sukraw/Episcopal News Service

[Episcopal News Service – Salt Lake City] The United Thank Offering’s little blue offering boxes are everywhere throughout the Salt Palace Convention Center – some 20,000 of them distributed so far, according to UTO Missioner Heather Melton – and every penny collected during the General Convention will go to support innovative young adult ministries.

It’s the first time the UTO has devoted a collection of this kind, Melton said.

“Often young adult ministries are innovative but not well funded. It’s our hope not only to help with seed money but also get other Episcopalians excited about supporting these ministries and replicating them across the church,” Melton said. 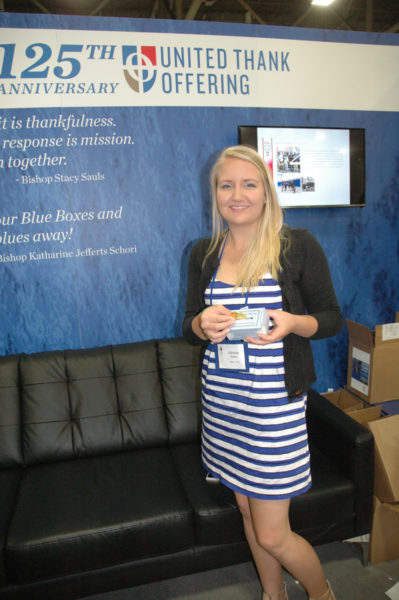 Katie Reeves, who received one of the UTO’s 125th anniversary grants this year, is using it to help congregations in central California use their outdoor space for food gardens. Photo: Tracy J. Sukraw/Episcopal News Service

Katie Reeves’ “Reimagine” project is one example. She received one of the UTO’s 125th anniversary grants this year and is using it to help six congregations in the Diocese of El Camino Real in central California to think creatively about using their outdoor space for food gardens.

In the Diocese of North Carolina, an anniversary grant to Caitlyn Darnnell helped equip “A Moveable Feast,” a food truck that is part snack stop, part chapel on wheels for college students on campuses without a chaplaincy presence.

These young women are continuing the legacy of the UTO’s 19th century founders, such as Julia Chester Emery of Massachusetts, Melton said. “We’re thrilled to support them in their work.”

UTO was established in 1889 as the United Offering by the Women’s Auxiliary to the Board of Missions and primarily supported the work of women missionaries. UTO later broadened its emphasis to include all areas of the church’s work.

At the traditional General Convention United Thank Offering Ingathering and Eucharist June 28, diocesan representatives and others presented symbols of their 2013-2015 contributions. Grouped by provinces, they crossed the altar platform to place their records in an offering plate held by UTO president Barbara Schafer and to be thanked by Presiding Bishop Katharine Jefferts Schori, House of Deputies President the Rev. Gay Clark Jennings and other members of the altar party.

The provincial total ingatherings were announced during the procession. They were

UTO suggests that people should daily pray and give – by putting some coins in their Blue Box – in recognition of their daily thanks for what God has given them. Oftentimes, the people whom the UTO calls “thankful givers” supplement their daily contributions before sending the money to UTO either individually or through a process known as diocesan in-gatherings. The UTO believes that thankful giving unites the givers spiritually with the people who benefit from their gifts.