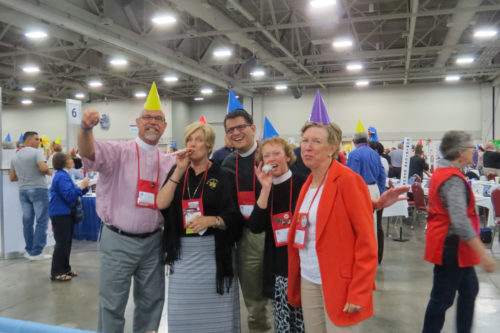 [Episcopal News Service – Salt Lake City] With noisemakers and applause, party hat-wearing General Convention deputies celebrated the 230th birthday of their house on June 27. While members of the House of Bishops met in sequestration at St. Mark’s Episcopal Cathedral a few blocks away to elect the next Episcopal Church presiding bishop, members of the first house of General Convention took time out from legislative debate to celebrate its history and honor several of its former leaders.

“It’s hard to express how revolutionary the first General Convention, held in the wake of the American Revolution, really was,” she said. “It’s in that spirit, the spirit of innovation, shared responsibility and decision making, and celebration of our history, that I’ve invited our distinguished former leaders to join us this morning for our party.”

“Dr. Willie is a groundbreaking African-American educator, the first African-American professor at Syracuse University, a distinguished public servant who worked with President John F. Kennedy and President Jimmy Carter, and a leader of desegregation,” Jennings said. As vice president of the House of Deputies he preached at the 1974 ordination of the “Philadelphia 11,” the first women ordained priests in The Episcopal Church. “When the bishops failed to uphold that ordination and give equal rights to women, he resigned his position in protest. Dr. Willie, we have not forgotten.”

After the award presentations, deputies had the opportunity to pose with cardboard likenesses of the faces of famous house leaders of the past: Bishop William White; former house President Pamela Chinnis; Supreme Court Justice Thurgood Marshall; and Charlie Crump, who served 17 terms as a deputy from the Diocese of West Tennessee.

“Seventeen General Conventions. Just think about that,” said his former chancellor, deputy C. Bradford Foster III. Foster said he used to tell people: “What do I do for Charlie Crump? I carry his briefcase; that’s all.”