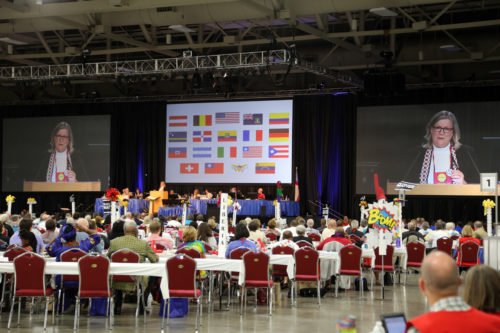 The Rev. Gay Clark Jennings was re-elected president of the House of Deputies unopposed during a legislative session June 26. Photo: Janet Kawamoto/Diocese of Los Angeles

[Episcopal News Service – Salt Lake City] With cheers, shouts and a standing ovation from deputies June 26, the Rev. Gay Clark Jennings was re-elected president of the House of Deputies.

“It’s been one of the greatest privileges of my life to serve the House of Deputies and The Episcopal Church I love so much,” said Jennings, the first ordained woman to hold the position.

In a procedural move because she was unopposed for the office, Jennings yielded the chair to deputies’ vice president Byron Rushing on the second legislative day of the 78th General Convention, meeting June 25-July 3 in Salt Lake City.

She said the Joint Committee on Nominations had presented their nominations and the floor was open for additional names for a variety of church offices, according to the rules of order. Deputies will stand for election Sunday, June 28, Jennings said.

The Rev. Ernesto Medina, deputy from Nebraska, said Jennings “in a really graceful way, turned the chair over to Byron Rushing the vice president and asked us to refer to him as ‘Mr. President.’ He took the chair and she disappeared. Then he started through the process of nomination for the president of the House of Deputies,” Medina told Episcopal News Service.

The chair of Dispatch of Business, the Rev. Jim Simons, deputy from Pittsburgh, offered a motion to suspend the rules and to hold the election immediately. Jennings was overwhelmingly elected by voice vote.

“We all applauded and offered a standing ovation,” said Canon Janet Wylie, deputy from Los Angeles. “It was not a surprise because she was unopposed, but she needed to compose herself before taking the chair again.”

Jennings said she looks forward to working with the new presiding bishop, who will be elected Saturday, June 27. “It’s a great privilege to be elected by my friends and colleagues, by my fellow deputies in the House of Deputies,” she said.

“There’s a great spirit in the House right now,” said Jennings. “They’re open to change, to trying new things. Nearly half are first-time deputies; there are many younger deputies. We even have a Twitter page for people on the floor of the House of Deputies.”

Among her future tasks, she believes, will be “to evaluate the many changes that we’ve instituted in the House of Deputies and then to build on those changes and to see how these work out at this convention. We’re doing a lot of new things, from new rules of order, the iPads, the virtual binders, so we’ll have a lot to evaluate at the end of convention and to build on that.”

She added that, “the whole point of all the changes is to improve legislative efficiency, and to give the house more time to have conversation and debate about what’s most important.”

She said the three joint sessions with the House of Bishops is just one of many great things happening at the 78th General Convention.

Jennings’s second term begins July 3, at the conclusion of convention. She can serve three consecutive terms or a total of nine years, she said.