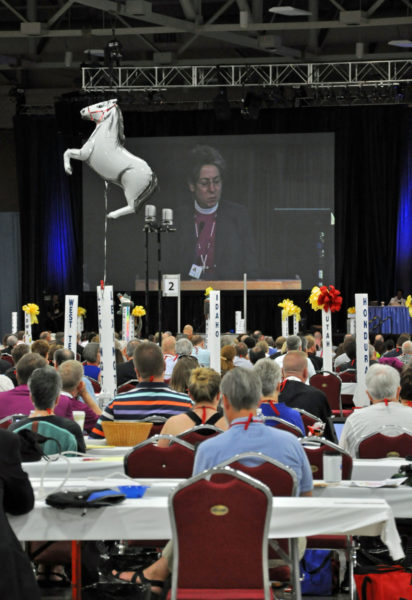 The church’s journey ahead “requires courage – to venture into the unknown future, to befriend strangers, to confront whatever denies life and liveliness, and to keep learning interdependent ways of living,” Presiding Bishop Katharine Jefferts Schori tells a joint session of the House of Deputies and House of Bishops on June 24, the day before General Convention’s official start. The horse balloon floats above the Diocese of Lexington’s deputation table. Photo: Mary Frances Schjonberg/Episcopal News Service

Editor’s note: On-demand video of the presiding officers’ remarks can be accessed by clicking here.

The joint session, coming a day before the General Convention’s legislative business officially begins on June 25, set a collaborative context for the work ahead.

With all that General Convention has to accomplish over the next nine days, both Jefferts Schori and Jennings focused on The Episcopal Church’s need to cross boundaries into new frontiers, even as it focuses on its institutional structure and governance.

They urged risk taking, soul searching, courage and openness in the enterprise.

Jefferts Schori described The Episcopal Church’s trek as “a missionary expedition,” using a space exploration analogy that played off the TREC acronym for the Task Force for Reimagining the Episcopal Church, whose restructuring proposals are a high-profile topic coming before General Convention.

“There is abundant adventure ahead on this heavenward trek, and it asks our courage to engage unknown beings, new challenges and unexpected opportunities,” Jefferts Schori said.  “We’re bound for the galaxy called Galilee and the edges of the known world, because that’s where Jesus sent us and that’s where he promises to meet us.”

She emphasized interdependence as the church’s vocation and destiny.

“No one goes alone; together we care for those most in need.  Our growing understanding of human interrelationship with the rest of creation means conscious care for the earth and all its inhabitants, not just the human ones,” she said.

She acknowledged “plenty of challenge ahead” for General Convention, and said that the decisions made in Salt Lake City “can help to build a more just and peaceful world,” she said.

“This body is meant to be a sacrament of God, an outward demonstration of the life and hope within us,” she said.

“We are on a missionary expedition, scattering seeds of life and love to the winds and across the earth.  There is abundant risk in such profligate sowing, for not all will take root and grow to harvest,” Jefferts Schori said, but nonetheless urged the church toward new ways of being and reaching out.

“How will this body here in Salt Lake continue to foster that kind of sowing?” she asked.

The text of the presiding bishop’s remarks is here. 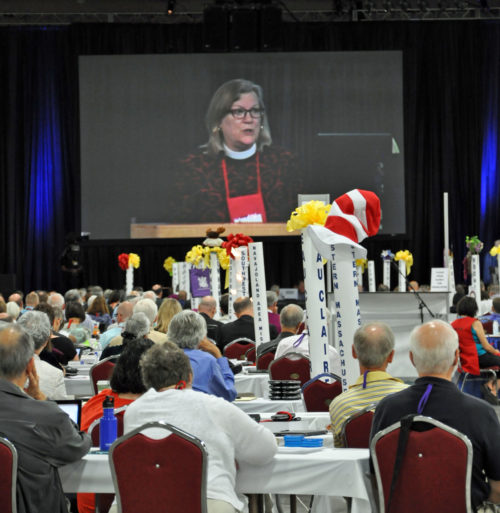 House of Deputies President the Rev. Gay Clark Jennings reminded the June 24 joint session of the House of Deputies and House of Bishops that both houses have a lot of work ahead of them before General Convention’s July 3 adjournment. “Not just meetings and hearings and legislative sessions, but also listening to each other and paying attention to what new things are arising among us,” she said. “Much of the work we have to do is about our own institutional future. But that’s not all of what we do.” Photo: Mary Frances Schjonberg/Episcopal News Service

Jennings, too, referenced how the church finds itself “standing on a boundary between the old and the new.”

“Gathering here to wrestle with the future of our beloved Episcopal Church, we are standing on holy ground, straining to hear God speaking above all the noise,” she said.

In preparation for the work ahead, “let’s quiet the din around us and listen for the new within ourselves,” she said, referencing a sermon by theologian Paul Tillich.

“Let’s turn down the volume on the Pew Center’s statistics about the decline of the institutional church, the endless online arguments about what millennials really want and what one tweeter recently called the ‘church decline industrial complex.’  Let’s quiet our souls,” Jennings said.

The church’s debate about what form its structure should take to enable mission is really about identity, she said.

Wrestling with issues of the church’s institutional future is not the only work ahead, she reminded the gathering.

“The church isn’t the only segment of our society that’s reeling right now,” Jennings said. “Income inequality is greater than it has been since 1928, our cities are besieged by gun violence and racial injustice, and too many young black men are caught in the school-to-prison pipeline.”

“This summer, especially, we must repent” of not doing enough “to right the wrongs of discrimination, white privilege and inequality in the world around us,” Jennings said.

“General Convention is where we Episcopalians have the ability not only to proclaim that black lives matter, but also to take concrete action toward ending racism and achieving God’s dream of racial reconciliation and justice.  We can do no less,” she said.

The text of Jennings’ remarks is here. 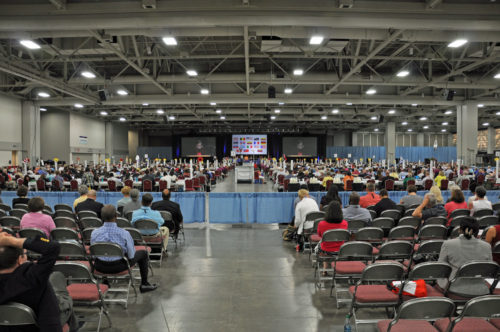 The June 24 joint session of the House of Deputies and House of Bishops met in the cavernous House of Deputies hall, which has enough space for close to 900 deputies and alternates, translators, a visitor gallery and space for media, international and other invited guests, and Executive Council members. Photo: Mary Frances Schjonberg/Episcopal News Service

The joint session also heard from the Rev. Nancy Crawford, the president of the Executive Board of Episcopal Church Women, whose triennial meeting is held concurrently with General Convention.

She reported on several ECW social justice efforts, including work over the past triennium to raise awareness of human trafficking — through support of Girls Educational & Mentoring Services, or GEMS, an education and mentoring service provider for girls and young women who have experienced sexual exploitation; support this year for the Homeless Youth Resource Center in Salt Lake City; and the ECW’s Women to Women project, which provides small micro-enterprise grants to women around the world.