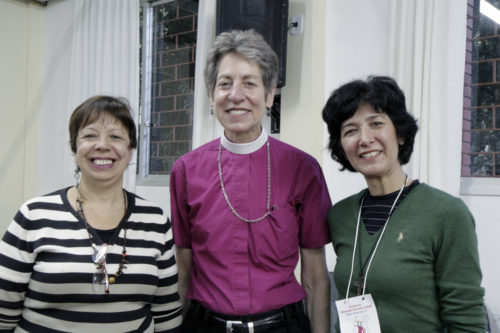 “As a church we feel we were really blessed to take this step quite early,” said Archbishop Francisco de Assis da Silva, Brazil’s primate since 2013, and bishop of the Diocese of Southwest Brazil, adding that it wasn’t until 1994, nine years later, that the Church of England ordained women to the priesthood.

Yet despite 30 years of women’s ordination, he said, “We still have resistance,” and despite female candidates in bishop elections, no diocese has taken that step.

In early June, as part of its 125th anniversary celebration, the Episcopal Anglican Church of Brazil also celebrated 30 years of women’s ordination. Coinciding with the celebration in Porto Alegre, the birthplace of the Episcopal Anglican Church of Brazil, 40 lay and ordained female theologians gathered at a Roman Catholic retreat house for a three-day national conference themed, “women, strength and faith.” As an invited speaker, Presiding Bishop Katharine Jefferts Schori delivered a lecture, “Discipleship of Equals: Episcopate and Sexism” on June 6.

For years, the Episcopal Anglican Church of Brazil’s Women’s Union has actively worked toward raising women’s status in the church and society, but despite women having accessed leadership positions in the church, the absence of a female bishop is cause both for concern and question among lay and ordained women.

The Brazilian church came close to electing the Rev. Patricia Powers, a longtime Episcopal Church-appointed missionary who in 1986 became the second ordained female priest and then the first woman to serve as a dean. In the 27 years since Powers stood for election, women have been included in bishop slates three times, most recently in 2012.

“We need to be represented in the House of Bishops where the decisions are made,” said the Rev. Carmen Gomes, who was the first woman ordained priest. “We can offer service in the house, not just as representatives of women, but of all who feel marginalized in the church.”

The three largest Southern Cone countries – Argentina, Brazil and Chile – all currently are headed by female presidents; unlike the Brazilian church, however, Argentina and Chile belong to the more conservative Anglican churches of South America, and do not support women’s ordination.

Modeled after a 2005 resolution passed by the Anglican Consultative Council that called for equal representation of men and women in leadership goals, the women drafted a similar resolution to be introduced at the church’s 2017 synod. In the meantime, they’ve committed to work not only to empower and prepare women for leadership roles, but to envision an episcopate different from the traditional, top-down male model, said the Rev. Glenda McQueen, the Domestic and Foreign Missionary Society’s officer for Latin America and the Caribbean, who attended the three-day conference.

A women’s model was something the presiding bishop touched on.

Because of their gender, women can bring particular gifts to the episcopate, said Jefferts Schori in her June 6 lecture, echoing words she’d spoken in late May at the Westminster Faith Debates at St. James’s Church in London, England: “… women’s presence in leadership expands the image of what it means to be made in the image of God.  Furthermore, given their social location in most societies, women’s experience of marginalization can help to bring that particular perspective to the work of leadership.”

During that lecture, the presiding bishop expanded her thoughts on marginalization saying that women bring their own experience “outside the norm” into leadership of a community, and women continue in much of the world today to experience marginalization and varying levels of social control in their lives.

Women as leaders “serve both as iconic images of the complexity and otherness of God and by representing and raising the concerns of the marginalized, having known that reality themselves.  Both are basic to following Jesus, who spent most of his active ministry with the marginalized, seeking to make them and their communities whole.  It doesn’t mean that men cannot also do that work, but that women by their social location are often closer to the reality of the oppressed and ‘unfree,’” she said.

Jefferts Schori spent June 5-7 in Porto Alegre, Brazil, in celebration of the Episcopal Anglican Church of Brazil’s 125th anniversary, 50 years of autonomy and 30 years of women’s ordination. In addition to the June 6 lecture, the presiding bishop preached and co-celebrated at the June 7 Eucharist at Most Holy Trinity Cathedral, the Episcopal Anglican Church of Brazil’s national cathedral.

Nearing the end of her nine-year term as presiding bishop, the faith debate in Westminster and the lecture given in Porto Alegre were the only times she’s been asked to speak on women, sexism and the episcopacy, Jefferts Schori said.

The invitation to participate in the faith debate at Westminster came after the Church of England appointed its first female bishop, the Rt. Rev. Libby Lane.

On June 6, during the gathering in Porto Alegre, the Very Rev. Mary Irwin-Gibson became the first woman elected bishop of the Anglican Diocese of Montreal.

At Westminster, Jefferts Schori said, she focused on women in religious leadership, but in Brazil, she thought it was important to emphasize the different trajectories and realities across the Anglican Communion, including statistics.

When the women learned the presiding bishop of The Episcopal Church would preach on June 7, they changed the date of their conference to coincide with her visit, said the Very Rev. Mannez Rosa dos Santos, dean of Most Holy Trinity Cathedral.

“It’s very special for the women of Brazil,” she said, speaking through an interpreter.

Three points underline the importance of the presiding bishop’s visit, she said: Elected as the first female primate in the Anglican Communion, Jefferts Schori has “a special witness and prophetic position”; sharing herself with the women indicates an openness to relationship; and her visit served as an opportunity for the Episcopal Anglican Church of Brazil to see a female bishop and visualize what women’s leadership in the episcopate means.

“We need to change our vision,” said dos Santos, who is one of two female deans serving the church.

Female priests make up more than 50 percent of clergy in eight of the 99 U.S.-based dioceses, mainly small, rural dioceses, said Jefferts Schori in her lecture.

Female priests “are also under-represented as senior leaders (rectors or deans) or clergy serving alone in a congregation. They constitute 31 percent of such clergy across the U.S. part of the church, and we don’t have enough data to say very much about the non-U.S. parts of The Episcopal Church,” she continued. “The percentage of women serving as senior clergy is lower in the more politically conservative parts of the U.S., and in dioceses where there are a lot of large and wealthy congregations.  More women are deployed in poorer and more rural areas, and in positions that pay less than average or where they serve without compensation.”

This can change, she added, if dioceses prepare the electorate to elect a woman:

Share the data; share the reality (for example, the number of ordained women and what fraction of the whole that represents, their trajectory and whether they are growing in percentage).

“And (challenge) people in the congregation to think about why women aren’t elected as church leaders in ordained ministry and why there are so few of them, because I don’t think people are conscious (of that) when they go to vote,” said Jefferts Schori in an interview with ENS.  “I think people vote for who they like and people they can imagine being their bishop and if they have never seen a woman [as a] bishop they probably aren’t conscious of the fact that they are not going to vote for somebody that they don’t think of potentially as being a bishop. And I don’t think it’s terribly conscious, but it can be brought into consciousness by doing some preparatory work, and by ensuring that there are women on the ballot and that the electors get exposed to the variety.”

In her lecture, she talked specifically about women as bishops, showing the numbers, which indicate it may be easier for a woman to be appointed a bishop, as is the case in the Church of England, rather than to be elected as in The Episcopal Church.

“In 1988, Barbara Harris was the first woman to be elected bishop in the Anglican Communion.  Since then, 44 other women have been elected or appointed across the Anglican Communion.  They have been almost exactly divided between suffragan bishops, 23, and diocesan bishops, 22. One suffragan has since been called to serve as a diocesan. In some parts of the Communion, bishops are elected by dioceses; in other provinces they are appointed by more centralized church bodies.  Thus far, it appears to be far easier to appoint women bishops than it is to elect them, especially as diocesan bishops,” she said.

Of the total 22 women elected as bishops in The Episcopal Church, nine have been diocesan bishops; four remain and a fifth will be consecrated in September. Since Jefferts Schori was elected in 2000, there have been 125 bishops elected, she said.

“The House of Bishops is beginning to talk about the low percentage of women [as] bishops,” the presiding bishop said, during the interview with ENS.

Jefferts Schori ran alongside six male candidates both when she was elected bishop of the Diocese of Nevada in 2001 and as presiding bishop in 2006.

“The male bishops are noticing that there are fewer women bishops in the House because the women who were elected in the first round are retiring,” she said. “It shocked me when I first looked at the statistics: 20 percent of the total are women, and only 10 percent of the active bishops in The Episcopal Church. And we’ve elected some 40 to 45 percent of the women in the communion, simply because we have so many dioceses, so many opportunities, but the fact remains that we are not electing them as diocesans.”

During a question-and-answer session following the presiding bishop’s lecture, the women wanted to know if she’d ever been discriminated against.

“Face to face, I’ve been treated well, but lots of mean things have been said on the Internet,” she said, adding that at her first Primates Meeting, the situation was tense at times, but the comments made weren’t personal, she said.

Later, when asked by ENS if she felt like a role model throughout her term as primate, Jefferts Schori said: “The fact that a woman is seen in that role, it’s really important. It’s like what I said in the first part of the lecture, women present another aspect of the image of God and if they are not represented then people’s understanding – of what and who God is – is really limited, and again it’s unconscious for most people. And again, it’s important to see the possibility that a woman can do this, particularly in patriarchal societies that continue to tell women that they can’t do these things.”