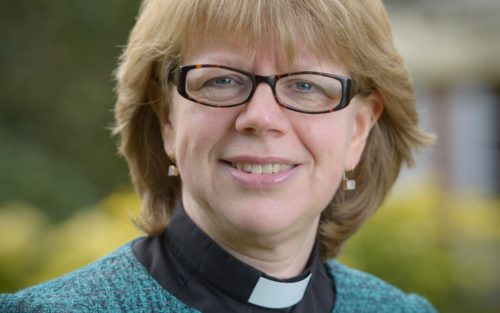 [Diocese of Exeter press release] The Rev. Dame Sarah Mullally, canon treasurer at Salisbury Cathedral, will be the next bishop of Crediton, a suffragan in the Diocese of Exeter. The appointment makes her the fourth woman to be named as a bishop in the Church of England.

Mullally, a former nurse, had a distinguished service in the U.K.’s National Health Service before ordination, culminating in her appointment as the government’s chief nursing officer for England in 1999, when she was the youngest person to be appointed to the post.

She was ordained in 2001 and served her curacy in St. Saviour’s Battersea Fields, initially as a self-supporting minister. She left her post as chief nursing officer in 2004 to take up full-time ministry, becoming a team rector in Sutton, Surrey, in 2006. In 2012, she was installed as canon treasurer at Salisbury Cathedral.

She was made a Dame Commander of the British Empire in 2005 in recognition of her outstanding contribution to nursing and midwifery. As the announcement was made, Mullally visited projects in the north of the Diocese of Exeter. “I am delighted to be appointed as the bishop of Crediton,” she said. “These projects show that our communities, inside the church and out, are built on the love and compassion people have for each other. In even our smallest rural communities, often where many of the other services and facilities have long gone, the church – and it can sometimes be only a few people – remains, as a symbol of God’s enduring love.

“Throughout my life, as both a nurse and a priest, I have experienced this love and I hope as bishop to be able to share that love with others,” she added. “My calling as a Christian and now as bishop has been shaped by my belief that we are called to be witnesses to the generous love of God and the good news of Christ Jesus. In my future ministry in the Diocese of Exeter I hope to encourage and enable Christians to grow in their faith, to share that faith with confidence and to serve the people of Devon with joy.”

The bishop of Exeter, the Rt. Rev. Robert Atwell, said he was delighted to welcome Mullally to Devon.

“This is an outstanding appointment. Sarah will enrich the life of the church in Devon enormously,” he said. “She will bring to her new role the same mixture of compassion, integrity and professionalism that has characterized everything she has done and achieved, both nationally and specifically within the Church of England.”

As bishop of Crediton, she will primarily look after east and north Devon, though in common with the bishop of Plymouth, also a suffragan, she will minister across the whole Diocese of Exeter.

Mullally, 53, is the fourth woman bishop to be appointed by the Church of England, and the first in the Southwest. She is married to Eamonn, who works as a business architect, and they have two adult children.

She will be consecrated as bishop of Crediton in Canterbury Cathedral in July, alongside the first woman to be appointed as a diocesan bishop, the Venerable Rachel Treweek, who is to be bishop of Gloucester.

She will then be installed in a service in Exeter Cathedral in September.

Mullally will succeed the Rt. Rev. Nick McKinnel, who moved to become bishop of Plymouth in April.