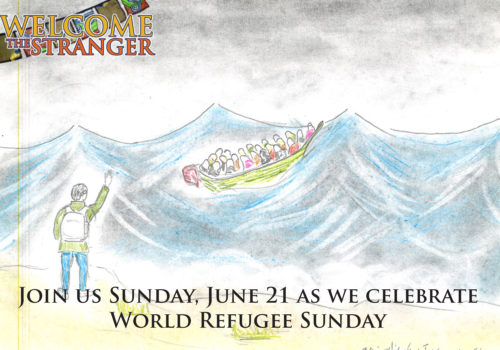 [Episcopal News Service] The refugee experience is a fundamental part of the Christian story and “by welcoming a stranger, we are welcoming the very Christ and God that we proclaim,” says the Rev. Austin Rios, rector of St. Paul’s Within the Walls Episcopal Church in Rome, Italy.

The crypt of St. Paul’s is home to the Joel Nafuma Refugee Center, a ministry of radical hospitality in the heart of Rome where hundreds of refugees can find a breakfast and a host of other resources to survive and to rebuild their lives. Because of the sheer numbers of Africans migrating across the Mediterranean Sea to escape persecution, many drowning en route, Italy is at the center of the most current migrant crisis.

Each year, World Refugee Day is observed on June 20. With the global refugee crisis at its worst level since World War II, St. Paul’s wanted to offer the Anglican Communion the gift of liturgical and other resources or use in congregations on Sunday, June 21 (the closest Sunday to World Refugee Day) as part of its “Welcome the Stranger” campaign to raise awareness of refugees and their struggles, and to encourage a more compassionate response to their journey. It’s an initiative that is supported by the American Embassy to the Holy See.

Eucharistic resources, adapted from a General Theological Seminary liturgy, was prepared by Rios and Young Adult Service Corps missionaries Jared Grant and Will Bryant, whose experiences at the Joel Nafuma Refugee Center inspired them to prepare the resources for World Refugee Sunday.

“World Refugee Day gives us Christians a chance to practice what we preach,” said Bryant, who is serving his second year as a YASC missionary and succeeded Grant in 2014 as a volunteer at the refugee center. “It gives us an opportunity to speak on behalf of those who have no voice. It allows us to honor those it is easy for us to forget: the millions of refugees living on the periphery of society. They are poor, they are homeless, but they are still the body of Christ.”

Bryant, whose YASC placement will conclude in August, said that a Communion-wide observation of World Refugee Day is needed now more than ever with the refugee crisis at record levels.

“We need to change the dynamic and lives of refugees [and] change the attitudes of people towards them,” he told ENS via a Skype interview from Rome, where at the center the refugees are known as “guests” by the many volunteers from different faith communities. “It’s about inspiring people to welcome the stranger rather than push them away.”

Global migration movements and their casualties affect everyone, he said, and responding to the needs of refugees “falls on not a single country or a continent but on the whole human race. My hope is that people all over the world will mark this special occasion, and that when we come together on June 21, we will pledge to ourselves and to the world that we will welcome the strangers in our midst. After all, and this is especially true for Americans, we were all immigrants once.”

Resources also have been prepared by the Domestic and Foreign Missionary Society – the legal and canonical name under which The Episcopal Church is incorporated, conducts business and carries out mission – to observe World Refugee Day in dioceses and congregations throughout The Episcopal Church.

The resources include worship materials and a bulletin insert for Sunday, June 21; an interactive map of World Refugee Day events across The Episcopal Church; and information about where to find an Episcopal Migration Ministries affiliate and local volunteer opportunities.

“In observance of World Refugee Day, the Domestic and Foreign Missionary Society invites Episcopalians to learn more about how The Episcopal Church welcomes and resettles refugees in partnership with our 30 resettlement affiliates in 26 dioceses” across the United States, said Bishop Stacy Sauls, chief operating officer of The Episcopal Church, according to a media release.

Deborah Stein, director of Episcopal Migration Ministries the refugee-resettlement agency of the Domestic and Foreign Missionary Society, said that World Refugee Day, established by the United Nations General Assembly in 2000 to honor the contributions of refugees throughout the world and to raise awareness about the growing refugee crisis, “is especially significant this year as the Domestic and Foreign Missionary Society continues to celebrate its 75th year of this life-saving ministry.”

For the 75-year celebration, the Domestic and Foreign Missionary Society has launched #ShareTheJourney, a multimedia effort “to educate, form, and equip Episcopalians to engage in loving service with resettled refugees and to become prophetic witnesses and advocates on behalf of refugees, asylees, migrants, and displaced people throughout the world.”

This is not the first time The Episcopal Church has responded with resources to focus on refugee problems: During the child-migrant crisis at the U.S.-Mexico border in 2014, many churches found ways to comfort and welcome unaccompanied minors and help them through their bureaucratic maze.

“I’ve had the opportunity to witness firsthand the compassionate and inspiring work of the JNRC, and to hear from their guests about how the welcome they receive there is so vital to their ability to assert their humanity amidst some truly desperate circumstances,” said Stein, who led a pilgrimage to Africa’s Great Lakes region in March to study the plight of refugees. “As Episcopalians celebrate the work we do here in the United States to welcome refugees, World Refugee Day is a reminder that we are joining with Anglican and Episcopal churches throughout the world in this important ministry.”

The Joel Nafuma Refugee Center was dedicated in 1995 and provides a sanctuary for refugees to seek advice and assistance at St. Paul’s Within the Walls, a parish in the Convocation of Episcopal Churches in Europe. The center offers breakfast, distributes toiletries and items of clothing, assists with job applications, and provides services for refugees to learn languages and computer skills.

Through a navigator program, a trained cultural mediator accompanies the refugees to asylum hearings or appointments with lawyers and doctors, Rios explained in a recent reflection essay. For more than two years, a group of artisans has been making and selling handicrafts. Each artisan piece is accompanied by a story that advocates and educates about the plight of refugees in Rome. The artisans share proceeds among themselves and donate back to the center.

“Christians follow and worship a Lord who not only ‘came down from heaven,’ migrating in the mystery of the Incarnation, but who only days after his birth was forced to flee to a foreign land because of a governmental campaign of infanticide,” Rios told ENS. “Jesus experienced both welcome (from Mary and Joseph, shepherds, magi, animals) and rejection (from Herod) from his birth …­ a dynamic that would continue throughout his earthly life.

“As inheritors of this tradition of commission, and its attending responsibilities to both receive and extend the hospitality that God has offered us, we are called to offer this welcome as well, especially as it relates to those who are vulnerable because of itinerancy or forced migration,” said Rios, “not only because welcoming is a proper human response to suffering, but because it is an essential part of our faith DNA. … Welcoming is never easy; it involves sacrifice. But if we are to believe in God’s promises, then we know that from such sacrifice comes the joyful, abundant and shared life that underwrites our salvation.”

Along with St. Paul’s, St. John’s Cathedral in Hong Kong and The Cathedral of All Souls in Asheville, North Carolina, have pledged to celebrate World Refugee Sunday with the special liturgy on June 21.

The resources also include downloadable reflections written by faith leaders and guests of the Joel Nafuma Refugee Center coming from war-torn countries in the Middle East and Africa with the intention that parishioners may seek to understand more deeply the plight of refugees in today’s migration crisis.

“Helping put refugees at ease means not only providing food, water, and shelter, but also helping learn a language, go to school, and find work,” said Bishop Pierre Whalon of the Convocation of Episcopal Churches in Europe in a June 2 reflection essay on the center’s website. “The benefits of welcoming are great, including economic and social. The penalties for refusing to welcome the stranger are severe. In the teachings of Christ, it is a matter of life and death, not only for the migrant but for us all.”

This is a time of extreme crisis for migrants all over the world, especially those traveling from North Africa across the Mediterranean Sea, according to a press release from St. Paul’s. In April, more than 900 migrants aboard one vessel died trying to cross from Africa to Italy. “This senseless tragedy was the focus of mainstream news media for a week. It brought to light the ongoing struggles of refugees everywhere,” the release noted. “But then, as quickly as it had appeared, the issue vanished from the headlines and the public eye. We celebrate World Refugee Day as a statement to the world that we have not forgotten refugees, even if the rest of the world has simply changed the channel. We stand united to welcome the strangers in our midst.”