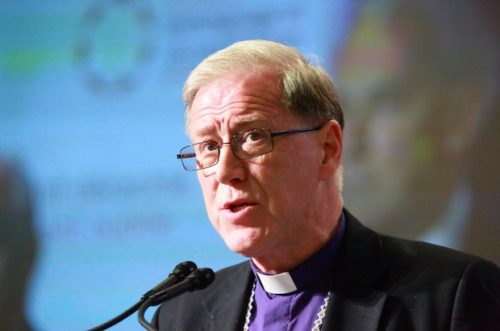 Archbishop Fred Hiltz calls release of the TRC report a “historic day for Canada, a sacred day for most of us, an absolutely great day” for residential school survivors. Photo: Art Babych

[Anglican Journal, Ottawa] Archbishop Fred Hiltz, primate of the Anglican Church of Canada, on June 2 commended the Truth and Reconciliation Commission (TRC) for issuing a final report that he described as “very comprehensive and far-reaching into the soul of the country with respect to what we need to do to bring about reconciliation [between Indigenous and non-Indigenous Canadians] that is just so long overdue.”

He called the release of the report a “historic day for Canada, a sacred day for most of us,” adding, “it [has to] be, for survivors of residential schools, an absolutely great day.”

In an interview, Hiltz said he appreciated the direction and clarity of the 382-page report, and its 94 “Calls to Action” specifically aimed at holding to account Parliament, the federal, provincial and local governments, churches, civic institutions and all Canadians.

These recommendations essentially say, “here are some initiatives that need to be in place, to which you need to commit yourselves and show concrete results,” he said. (See related story.)

Some recommendations particularly resonated with him. “The idea for a Royal Proclamation is bang on,” said Hiltz. “I think the idea of a Covenant of Reconciliation is absolutely beautiful. The idea of a National Council for Reconciliation gives credence and authority to what the Commission has said that this is not an ending, it’s a beginning.”

In its report, the TRC called on the federal government to jointly develop, with Aboriginal peoples, a Royal Proclamation of Reconciliation to be issued by the Crown. “The proclamation would build on the Royal Proclamation of 1763 and the Treaty of Niagara of 1764, and reaffirm the nation-to-nation relationship between Aboriginal peoples and the Crown,” it said. The proclamation must repudiate “concepts used to justify European sovereignty over Indigenous lands and peoples,” said the TRC, including the Doctrine of Discovery, a principle of charters and acts developed by colonizing Western societies 500 years ago to expropriate Indigenous lands and territories.

It also called on all parties to the Indian Residential Schools Settlement Agreement — the federal government, churches (including the Anglican Church of Canada), survivors and the Assembly of First Nations — to develop and sign a Covenant of Reconciliation. This covenant must reaffirm their commitment to reconciliation, repudiate the Doctrine of Discovery and support the renewal or establishment of Treaty relationships “based on principles of mutual recognition, mutual respect and shared responsibility for maintaining those relationships in the future.”

The TRC also asked the Parliament of Canada, in consultation and collaboration with Aboriginal peoples, to establish a National Council for Reconciliation that will monitor, evaluate and report annually on “post-apology progress on reconciliation to ensure that government accountability for reconciling the relationship between Aboriginal peoples and the Crown is maintained in the coming years,” said the TRC.

Hiltz said he felt “very challenged” by some of the calls to action directed specifically at churches, but also felt “encouraged that some initiatives are already in place.” He cited the TRC’s call for the government and churches to formally adopt and comply with the principles, norms and standards of the UN Declaration on the Rights of Indigenous Peoples as a framework for reconciliation. “They want a statement by March 31, 2016 about what you’re going to do about that. I look at that and think, ‘we’ve got a lot of work to do,’ ” he said. “And then, I think, we [the church] have a [Primate’s Commission on the Doctrine of Discovery, Reconciliation and Healing] in place…”

Conversations around the U.N. declaration and the Doctrine of Discovery have already started in the church, and the TRC’s recommendations “challenge us to be steadfast and be accountable, and I think that’s entirely in order,” he added.

Hiltz also said he agreed with the TRC’s assessment that the residential schools constituted a form of cultural genocide. “That’s what it was. I agree with that. The policy of assimilation was to ‘kill the Indian in the child,’ and turn him or her into a citizen. That’s cultural genocide,” he said.

Asked what his message was to Anglicans, Hiltz said, “My message is as simple as what I heard this morning: we need to turn apology and actions associated with that into priorities, and so I’m saying, we need to take the recommendations of the TRC, which apply to the churches, and declare them to be priorities in our church.”

In its recommendations specific to churches that operated the federally funded schools (Anglican, United, Presbyterian and Roman Catholic), the TRC asked that education strategies be developed “to ensure that their respective congregations learn about their church’s role in colonization, the history and legacy of residential schools, and why apologies to former residential school students, their families and their communities were necessary.”

The TRC also called on church signatories to the Indian Residential Schools Settlement Agreement as well as other faith groups to “formally recognize Indigenous spirituality as a valid form of worship that is equal to their own” in order to address the “spiritual violence” committed in the schools, the effects of which, reverberate to this day in Aboriginal communities.

About 150,000 First Nations, Inuit and Métis children were removed from their homes and sent to residential schools as part of the government’s policy of cultural genocide, said the TRC. “The Canadian government pursued this policy of cultural genocide because it wished to divest itself of its legal and financial obligations to Aboriginal people and gain control over their land and resources,” it noted. “If every Aboriginal person had been ‘absorbed into the body politic,’ there would be no reserves, no Treaties and no Aboriginal rights.”

Cultural genocide, explained the TRC, involves the destruction of political and social institutions of a group, the seizure of their land, the forcible transfer of populations and restriction of their movements, the banning of their language and spiritual practices, the persecution of spiritual leaders and the disruption of families to prevent the transfer of its cultural values and identity to succeeding generations. “In its dealings with Aboriginal people, Canada did all these things,” said the TRC.