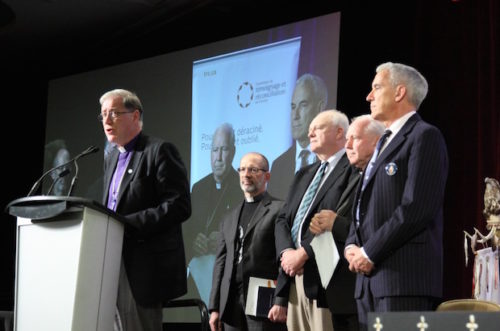 [Anglican Journal, Ottawa] Acknowledging that their apologies for harms done at Indian residential schools “are not enough,” Anglican, Presbyterian, Roman Catholic and United church leaders on June 2 welcomed the recommendations of the Truth and Reconciliation Commission (TRC), which they say will offer direction to their “continuing commitment to reconciliation” with Indigenous peoples.

“It is clear that Indian Residential Schools, in policy and in practice, were an assault on Indigenous families, culture, language and spiritual traditions, and that great harm was done,” said a joint response read, on behalf of the churches, by Archbishop Fred Hiltz, primate of the Anglican Church of Canada.

While noting the “good intent and care of many who worked” as staff in these federally funded, church-run schools, the churches admitted that “those harmed were children, vulnerable, far from their families and communities,” and that “the sexual, physical, and emotional abuse they suffered is well-documented.”

The response was made  after the TRC released its final report that offered 94 “Calls to Action” on issues around Aboriginal spirituality, education, health, missing residential schools children, justice and language, among others.

The churches — all signatories to the Indian Residential Schools Settlement Agreement—responded to some of the TRC’s recommendations that were directly addressed to them. “We are committed to respect Indigenous spiritual traditions in their own right,” they said, a promise that was met with loud applause.

The TRC report specifically calls on churches as well as other faith groups to “formally recognize Indigenous spirituality as a valid form of worship that is equal to their own” in order to address the “spiritual violence” committed in the schools.

“As individual churches and in shared interfaith and ecumenical initiatives…we will continue to foster learning about and awareness of the reality and legacy of the residential schools, the negative impact of such past teachings as the Doctrine of Discovery, and the new ways forward found in places, such as  the United Nations Declaration on the Rights of Indigenous Peoples,” the churches also vowed.

They also promised to continue funding “community-controlled initiatives in healing, language and cultural revitalization, education and relationship-building, and self-determination.”

The statement also committed to involving the churches in “Calls to Action that include our members as citizens and residents of Canada,” such as the call to establish a National Council of Reconciliation.

The statement was signed by the Rev. Stephen Farris, moderator of the Presbyterian church; the Rt. Rev. Gary Paterson, moderator of the United Church; Fr. Peter Bisson, Provincial of the Jesuits in English Canada, and Archbishop Gerard Pettipas, President of the Catholic Entities Parties to the Indian Residential School Settlement, all of whom were present for its reading.

Pettipas proceeded to read a statement from the Roman Catholic entities involved in residential schools, which reiterated a commitment to healing and reconciliation. But the statement did not address the TRC’s call for the Pope to issue an apology “for the Roman Catholic Church’s role in the spiritual, cultural, emotional, physical and sexual abuse of First Nations, Inuit and Métis children in Catholic-run residential schools.”

In addition to the churches, there were also responses from the survivors, represented by former Assembly of First Nations (AFN) National Chief Phil Fontaine (who was instrumental in negotiating the Indian residential schools settlement agreement that launched the TRC); the federal government, represented by Aboriginal affairs and northern development minister Bernard Valcourt; the AFN, represented by national chief Perry Bellegarde; and the Inuit Tapiriit Kanatami, represented by National Inuit Leader Terry Audla.