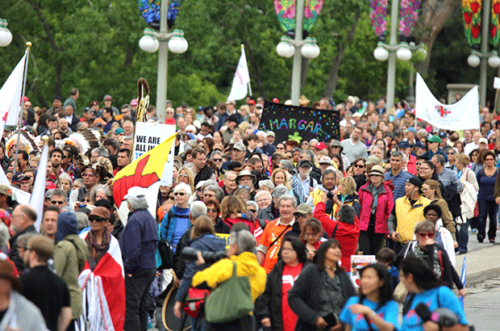 Between 7,000 and 10,000 people from across Canada marched from Gatineau to Ottawa as part of the launch of the final event of Canada’s Truth and Reconciliation Commission, May 31 to June 3, in Ottawa. Photo: Art Babych

[Anglican Journal] Drums thunder in the Rue Laurier underpass, and voices echo in song and conversation. Banners, placards, signs and flags catch the wind coming in off the Ottawa River, and below them thousands of marchers approach Portage bridge, which links Gatineau with Ottawa.

They are walking to signal the beginning of the Truth and Reconciliation Commission of Canada’s (TRC) final event. The TRC’s six-year inquiry into the sad legacy of residential schools — which saw 150,000 aboriginal children removed from their homes and enrolled in church-run schools — will end with the release of a final report on June 2.

Despite the gravity of the issues at hand, there is a festive feel to the air. Old friends see each other across the crowd and rush to embrace. Yarmulkes mix with crucifixes and headscarves and eagle feathers. Traditional dress from many nations is worn, and songs are sung in several languages. Young parents push their children in strollers, or sit them on the backs of their bicycles. A group of brightly dressed women whose signs declare that they are Ottawa’s “raging grannies” exchange banter with curious walkers.

They have come from across the country, these walkers: Inuit from Inukjuak on Hudson’s Bay, Cree from Moose Factory in North Manitoba, Coast Salish from Vancouver Island, Mohawks from the Six Nations Territory outside of Brantford, Ontario. They are joined by non-aboriginal Canadians of all races — Canadians who have come from Toronto and Montreal, Winnipeg, Ottawa, Saskatchewan and Vancouver — to hear the truth about Canada’s past, and to show their willingness to work for a future of reconciliation.

The walkers began to gather at École secondaire de l’Île in Gatineau the morning of May 31, where they were welcomed to the traditional territory of the Algonquin people by Chief Kirby Whiteduck of Pikwakanagan First Nation, before hearing words from a number of First Nations and government leaders, including Minister of Aboriginal Affairs and Northern Development Bernard Valcourt and TRC commissioner Marie Wilson.

“Today is just a stop over as we catch our breath on a six-year journey,” says Wilson before the walk begins in an explosion of drumming. “We have a long road ahead of us, and this walk is the symbolic beginning of a movement…that cannot end.”

Not long into the walk a group of women stop beside Rue Saint-Rédempteur to wait for a friend to catch up.

“I’m walking to show that I’m finishing that part of my life,” says Evelyn Spence, one of a group of eight residential school survivors who flew from the remote Northern Ontario town Webequie to Thunder Bay and then drove 16 hours to Ottawa to attend the closing event for the TRC.

Further ahead, Archbishop Fred Hiltz, primate of the Anglican Church of Canada, walks with Susan Johnson, national bishop of the Evangelical Lutheran Church in Canada, and later, with Diocese of New Westminster Bishop Melissa Skelton. He carries a hand drum, and at one point joins in with a group of indigenous drummers.

Nearby, Anglicans from St. Margaret’s Anglican Church in the Diocese of Ottawa walk under a banner decorated with an inukshuk. They explain that the inukshuk is in honor of their Inuit members (St. Margaret’s is home to many Inuit, and has an Inuktitut service).

Other Anglicans have also come from the dioceses of Saskatchewan, Niagara, Toronto and the Spiritual Indigenous Ministry of Mishamikoweesh.

As the walkers turn onto Wellington Street and made their way past Parliament Hill, the air fills with the sound of bells ringing from St. Andrew’s Presbyterian Church.

“We’re ringing the bells for you!” declares Elizabeth Phillipson to the walkers, pulling the belfry rope at the entrance to St. Andrews. Jennifer Henry, the director of the Canadian ecumenical justice group KAIROS, runs up the steps to join her, as does Hilary Johnson, a survivor from Williams Lake in B.C.

Phillipson hands Johnson the rope, and he gives it a couple of energetic pulls. “They let me ring the bell!” he laughs happily before re-joining the march.

Not all the walkers are as joyful. Further along the road, John Moses carries an old photograph of his father and aunt. Moses’ father, grandfather, and great-grandfather all attended the Anglican-run Mohawk Institute in Brantford, Ontario. “I’m the first generation after four that wasn’t raised at the Mohawk,” Moses, who is raising his own family in Ottawa, says with a mix of pride and sadness.

Not far from Moses, Janet Head carries a picture as well. It shows her father and mother, both of whom passed away in recent years. Her mother, the Rev. Hagar Head, an Anglican priest, wears a clerical collar in the picture. “The reason why she went into ministry is because she wanted to educate the church about what happened to her in residential school,” says Head, “but when she told her story, they told her to get over it.”

The walk ends at Marion Dewar Plaza, outside of Ottawa City Hall. The walkers — an estimated 7,000 to 10,000 of them —  struggle to fit into the square, and flow over onto Laurier Ave. The plaza is filled with tents, and before the speeches begin, an Ottawa troupe of Métis dancers — Jaime and the Jiglets — takes the stage to raise the mood.

The series of speakers who follow — Ottawa mayor Jim Watson,  Ontario Premier Kathleen Wynne, and TRC chair Justice Murray Sinclair — remind the crowd of why they have gathered.

Wynne promises to walk alongside Indigenous Ontarians, citing a recent decision to expand teaching about residential schools in the Ontario schools curriculum. Not everyone in the crowd is convinced.

“Honor the treaties!” A young man with a thick black braid and a t-shirt with a tepee on it shouts.

“That is my exact next point,” Wynne responds, promising that her government will do more to raise awareness, especially among children, about the “important role the treaties play in our lives.”

But the last speech of the afternoon, by Justice Murray Sinclair, offers a somber reminder.