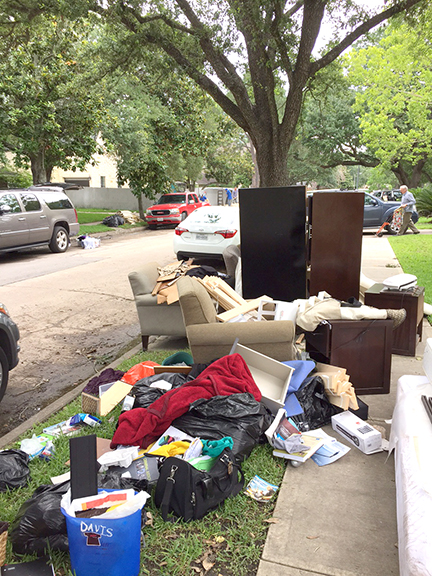 Bags of garbage line the street for blocks and blocks around Braes Bayou in Southwest Houston. Photo/Carol E. Barnwell

[Episcopal Diocese of Texas] “I saw a lot of people with a light in their eyes,” said the Very Rev. Russ Oechsel, archdeacon for the Diocese of Texas. “They know God is with us all the time.”

Oechsel led an emergency spiritual care team from the Diocese of Texas through the streets of the Meyerland area in Southwest Houston, an area especially hard hit by recent flooding. Their purpose was to show up to listen to the stories of those affected by the flooding during the past week. In addition, they carried coolers filled with water bottles and Home Depot gift cards. They heard many stories and were struck by the number of Houstonians out helping their neighbors as flooded homes were cleaned out.

“We saw off -duty police officers, firemen and military personnel helping people clear out wet carpet and sheetrock. There was one group who showed up with food,” Oechsel said. “They set up under a big tent serving lasagna to anyone who came.”

In the Westbury neighborhood, they met Stephanie, the leader of the Westbury Civic Club. Stephanie was under a blue tent recording the needs of the various homeowners and at the same time sending out volunteers to help those homeowners address their needs.

“Stephanie was doing this on an ad hoc basis with no particular training, but with the heart of a leader and the compassion of our Savior,” Oechsel said. “It was a powerful example of people caring for each other.”

The team met a young minister and his wife who were renting their home, now flooded. The couple has a young son, 18 months old, and they are expecting another boy soon. The owner of the house had come to remove carpeting and friends were helping them move their furniture and items that were not ruined into storage. Their church has found temporary housing for them.

Oechsel said they met a single woman who had insurance, but it would not cover temporary housing. She’d begun cleaning out the house, but still needs help. The team left contact information and plans to follow up with emergency funds early next week.

“We met a wonderful man named Drew,” Oechsel said. “He lost his father early in his life, but was raised in the neighborhood. He takes care of his elderly neighbors, mowing their grass and watching out for them. He asked us to go and see Mrs. Hamilton. He said he knew she needed to talk. We walked down the street and knocked on her door and were greeted by a lovely older woman. She cares for her husband who has Alzheimer’s and is bed bound. He is in hospice and she pays for a caregiver during the day and at night,” he said. “Mrs. Hamilton’s son came to help clean out so she can save her energy to care for her husband. She was very grateful for our visit promised she would call when she was ready for help.”

“We have some funds,” he said, “and I handed out a lot of cards with my phone number. Mostly, we spent the day listening to peoples’ experiences,” he added.

“I spoke to the former senior warden at Ascension Episcopal Church,” Oechsel said. “He and his brother were helping their father who is in his 80s and has Alzheimer’s.” The man has lived in his home for nearly 60 years and it was completely flooded.

“It’s important that we are present,” Oechsel said. “Our spiritual care team is there to listen to people, to pray with them, assess their needs, offer gift cards, water and chat.”

“We’ll sit down with the diocesan staff in West Texas to map out our resources for long term recovery once the first wave of cleanup has taken place,” he said. Most of the homes destroyed in Wimberley were likely to be insured. That is not the case to the south in San Marcos. “If we begin a major rebuilding effort, it may focus on the San Marcos area, but we will know more in a few weeks,” he said.

The Diocese of Texas had several churches report minor damage, but no major flooding, although many parishioners are facing major rebuilding once the storms are past. Many cars were flooded as well. 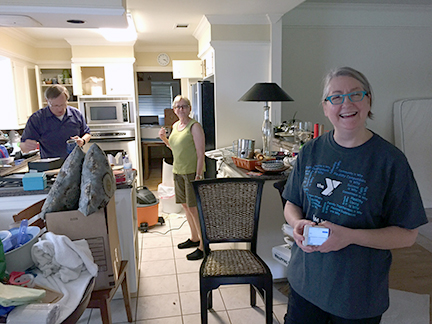 The Rev. Gena Davis, right, had just put her house on the market when it was flooded. She and husband Gary have spent the past week throwing most of their soaked library onto the curb and taking clothes to the dry cleaners with lots of help from parishioners. “Well, it’s a heck-of-a way to downsize!” she said. Photo/Carol E. Barnwell

The Rev. Gena Davis, rector of Grace Episcopal Church, Houston, had more than two feet of water in her home and lost two cars. Much of her extensive library was lost to water damage, although she was able to find her treasured icons in time to dry them off and save them from permanent damage.

Her husband Gary worked for three years overseeing the rebuilding efforts in Galveston following Hurricane Ike and now finds it strange to be on the receiving end of the flooding. “I remember comforting people who were very upset at having lost everything,” he said. “I still can’t take this all in,” he added, looking around at the piles of furniture and household items hauled to the curb from their home.

Davis said she ignored the numerous alerts from her cell phone the night of the flood and it wasn’t until she realized the car’s alarm was going off that she got out of bed to check. It was then she stepped into several inches of water, “that just continued to rise.”

Texas hopes for a drying out period in the coming days and many consider that the drought the state has suffered for the past several years might not look so bad.

Donations are being accepted for flood victims at the Diocese of Texas. Make checks payable to The Episcopal Diocese of Texas, marked “flood relief,” and mail to: 1225 Texas St., Houston, TX 77002.

Online donations are being accepted by the Diocese of West Texas. Go to dwtx.org/departments/world-mission and click “donate.” Apply your gift to “commission of emergency response” or contact Kaitlin Reed at 888.210.824.5387 or email her at Kaitlin.reed@dwtx.org with further questions.

— Carol E. Barnwell is the director of communications for the Diocese of Texas.