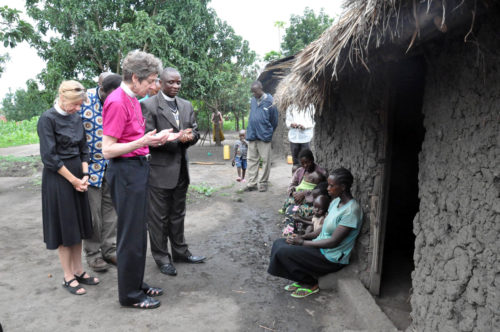 During a July 2011 visit to the Democratic Republic of Congo, Presiding Bishop Katharine Jefferts Schori, the Rev. Margaret Rose and the Rev. Petero Sabune stop to say a prayer with widows in a community near the Anglican University of Congo in Bunia. Widows are considered outcasts in many Congolese communities. Photo: Matthew Davies

[Episcopal News Service] The Democratic Republic of Congo (DRC) is ranked among the world’s poorest countries, and since the former Belgian colony fell into the hands of corrupt and power-hungry leaders following its independence in 1960, the Congolese have rarely experienced life without conflict.

Quoting from Isaiah 58, Presiding Bishop Katharine Jefferts Schori said: “The peacemaking work that we are all about is repairing [the] breach, that gap in abundant life that Jesus believes is the birthright of all human beings. Repairing that breach is what we are about and why we are here.”

Jefferts Schori was moderating a panel at the conference that focused on international cooperation for peace building and reconstruction. She visited the DRC for six days in July 2011 to spend time with the victims of war, orphaned children and women who’ve been raped by rebel soldiers leading to stigmatization and abandonment by their families and communities. Jefferts Schori witnessed how the Province L’Eglise Anglicane du Congo (Anglican Church of Congo) and its partners are committed to serving the vulnerable, needy and traumatized in the Central African nation of some 72 million people.

“It’s incredibly powerful to see that work going on and to hear the women’s stories and to hear about how the churches are supporting the healing of communities,” Jefferts Schori said in opening the WCC panel.

She described how The Episcopal Church has been involved in the DRC for many years through advocacy and partnerships. “One of the ways that we try to improve our constructive support is by gathering people who work on issues relating to the Congo,” she said. “It is a way to keep everyone aware of the latest developments. We have at times called for a week of prayer … to raise awareness among our own members” and to encourage advocacy.

Episcopal Relief & Development partners with the Anglican Church of the Congo on programs that support post-conflict healing. Through Ensemble Nous Pouvons, or Together We Can, church partners have mobilized community-based groups to identify their existing resources, along with actions they can take to foster development.

Following independence in 1960, the Democratic Republic of Congo – about the same size as the continent of Europe – faced more than three decades of gross corruption under the presidency of Joseph Mobutu, who was supported by the United States as a “friendly tyrant” for his resistance to the Soviet Union. Rebels led by Laurent Kabila overthrew Mobutu in 1997.

Initially raising hopes, Kabila was installed as the new president and changed the country’s name from Zaire to the Democratic Republic of Congo. But his allies became enemies, and the DRC entered five years of brutal war in which an estimated 5.4 million people died. When he was assassinated in 2001, Kabila was succeeded by his son, Joseph Kabila, who remains the DRC’s president in a power-sharing government that includes former rebels.

The war was fueled largely by a scramble for the country’s vast mineral resources. Rebels in the east, supported by Tutsi militias and neighboring countries Uganda and Rwanda, battled the Kinshasa-based government, backed by Hutu militias and Angola, Namibia and Zimbabwe. In October 2004, the human rights group Amnesty International announced that 40,000 cases of rape had been reported over the previous six years.

As the DRC – which hosts the United Nations’ largest peacekeeping team – attempts to recover from what has been dubbed the bloodiest conflict since World War II, rebel activity still roils the east of the country and is synonymous with gender-based violence, particularly in rural villages. Some reports reveal stories of rebel soldiers raping women while their husbands are forced to watch, then killing family members and carrying out acts of cannibalism.

A major consequence of the Congo’s war and the associated atrocities is the plight of some 3 million internally displaced people and refugees who have fled to camps in neighboring countries.

In early March, eight Episcopalians traveled to Kenya and Rwanda to learn about refugee resettlement today through the lens of Congolese refugees on a #ShareTheJourney pilgrimage organized by Episcopal Migration Ministries, the Domestic and Foreign Missionary Society’s refugee resettlement service.

In 2014, Episcopal Migration Ministries and its partners helped to resettle 5,155 of the tens of thousands of refugees who came to the United States through the United Nations High Commissioner for Refugees’ screening process. The agency will work to serve as many people this year, as the United States plans to resettle 70,000 refugees. Many of those refugees will come from the Democratic Republic of Congo.

In Geneva, Jefferts Schori said she was struck by the reflections and the vision that Christians hold together of a world without violence. She urged those attending the WCC conference to consider how they might better partner in peacemaking and for positive action.

The conference follows on from a 2009 visit to the Congo by a WCC delegation, identification by the 2013 WCC Assembly of the Congo as a “priority country” in its international work, and an April 2014 visit by WCC general secretary, the Rev. Olav Fykse Tveit, to an ecumenical forum in the nation’s capital, Kinshasa.

Tveit, in his opening remarks at the Geneva conference, said the time is ripe “to bring our discussions into action.” Although for many years the Congo has been “a context of suffering,” he said, “this gathering is a sign of hope for another story, another reality, another future” for the nation as churches decide how to use their resources together for peace, security and sustainable development there.

The conference concludes on May 29 with a look towards the 2016 DRC presidential elections and the future work of an ecumenical forum on issues relating to the DRC.