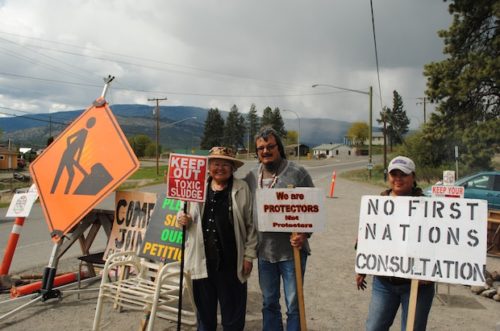 Partially processed human waste — known in the industry as “biosolids” — are being dumped onto a 320-acre patch of former ranch land not far from where the Spius Creek flows into the Nicola River, and concerns about the safety of the practice have led local First Nations to impose a moratorium on the practice and local concerned citizens to enforce a blockade to keep more waste from entering the valley.

“It’s like living in a real stinky outhouse,” said Heather Shuter, a member of the community action group Friends of the Nicola Valley and member of Scw’exmx parish, part of the Anglican Parishes of the Central Interior (APCI). “My daughter drove up the hill, and she must have [driven] through one of these fields, and when they came back she said they had a devil of a time cleaning their pickup because it stunk so much.”

Harold Joe, a councilor for the Lower Nicola Indian Band, said people became aware of the dumping only last winter. “Some of the residents close by there were objecting to the smell,” he said. “It all happened kind of suddenly.”

Lower Nicola’s chief, Aaron Sam, wasn’t given any warning about the dumping, either. “[Due to] community concern, the local bands and the chiefs started looking into the issue,” he said. “We haven’t been notified by the government at all where it’s being disposed of in our territory. The way we found out about it back then is by word of mouth.”

In early March, the Friends of the Nicola Valley responded by blockading Highway 8, the main highway leading into the valley, in order to keep any more biosolids from being dumped on the land near their homes.

“People from all over B.C. have stopped here,” said Judy Weinart, who has been on the blockade almost every day since it began. “They’re sympathetic. [The biosolids] come out of their area, and they can’t believe it’s being dumped here.”

Weinart and fellow-blockader Jason Schroeder encourage drivers of passing cars to sign a petition. They seem to have a good rapport with them, many of whom honk in support. When traffic is slow, the blockaders tend a fire to keep themselves warm. Beside the highway, they have placed large homemade signs with slogans like, “No More Bio Sludge!” and “Keep Your Own Sewage!”

From the very beginning of the protest, many of the strongest voices have been Anglican. The priest for Scw’exmx Parish, the Rev. Danny Whitehead, has been unwavering in his support of the actions, offering the parish hall in Shulus to blockaders who need somewhere to rest.

“As Christians, we are called to take care of creation,” Whitehead explained. “Our First Nations brothers and sisters have always done that, and set an example for us—and so being a priest [who] has the privilege and honour of working with First Nations, I very much support what they’re doing.”

The blockade has also received enthusiastic support from Barbara Andrews, suffragan bishop in charge of APCI, who has invited all members of APCI “to come with me to be protectors on the picket line.”

Members of the territory’s Indigenous council, including many pastoral elders, came forward at APCI’s assembly at the beginning of May to encourage Anglicans of the Central Interior to stand with their First Nations brothers and sisters in protecting the land.

In a passionate address to the assembly, Shuter spoke about the challenges facing both settlers and First Nations people in the Nicola Valley.

“They’re slathering it on our fields, our ranch lands, in the wilderness,” she said, “and they put a sign up there saying, ‘don’t go on this property for three months, do not eat any of the products from this field for three years.’ Do our deer know how to read that sign? Do our fish know how to read that sign, when they’re swimming in those rivers?”

This point, in particular, strikes a strong chord with many First Nations people living in the valley, who subsist in large part from food gathered in the traditional manner. Shuter herself estimates that 90 per cent of the meat and fish her family eats comes from the land rather than the supermarket.

Sam, too, is worried about the potential effects contamination of the water could have on public health, given that the land the biosolids are being dumped on is not far from the Nicola River, the valley’s main water source and an important salmon spawning ground

But while many of the First Nations and settlers living in the valley are united in their resistance to dumping, finding a solution to the problem has not been easy.

The chiefs of the Nicola Valley bands sent a letter to the provincial government in December informing them, as Sam put it, “that we wanted the biosolids not to be coming into the valley anymore, and we wanted to be informed about what is going on in our traditional territory.”

The problem is that the biosolids are being disposed of on private land that has been purchased for this purpose. Several companies are involved, including Agassiz-based BioCentral and New Westminster-based Sylvis, and all of them obtained the necessary government permits.

The chiefs have had some contact with the companies bringing the waste into their community, and some of the companies have shown a desire to work out an arrangement, but Sam said this will not lead to a lasting solution.

“It’s an issue with government,” he said. “The government has that legal obligation to consult and accommodate First Nations, and all these companies…it’s not the companies’ fault—they worked through the current legislation. The First Nations perspective is that we have to figure something out on how we’re going to move forward with government.”

The provincial government, however, has not responded to concerns raised by Nicola Valley residents.

In March, the Friends of the Nicola Valley chose to enforce the moratorium declared by the chiefs by blockading the highway around the clock, and while this effectively stopped the dumping, it still did not bring serious government engagement. In mid-April, the five Nicola Valley chiefs took things a step further by blockading Christy Clark’s constituency office in West Kelowna, an action that Shuter was personally involved in.

“Three non-Natives had to get us in the building,” she recalled. “We called them Trojan grannies — three elderly ladies. Their job was to get the door open, and then all the protectors [sic], who were around the side of the building…had to zip in, and that’s the only way we got in, because they had already been notified that some blockaders were going to be over there. We were there for six days. Nothing from Christy Clark.”

In an April 15 press conference, Clark said there is no easy solution. “There’s a lot of hands in the pot here, so it’s taking a little bit more time than I would have hoped to get it settled.”

Clark noted that the Minister of the Environment, Mary Polak, had met with the protesters, but when asked about it, Sam said the meeting “didn’t go anywhere.”

“They weren’t willing to move anything at all,” Shuter explained, “so the meeting dissolved.”

When asked to comment on the matter by the Anglican Journal, Polak sent a copy of a statement she issued, which expressed her support of the “application” of biosolids. “Biosolids can only be applied to the land when there is benefit,” said the statement. “Biosolids are used in compost or as fertilizer on land. The nutrients in the biosolids make soils healthier, similar to animal manure.” Polak on to note that she had met on “numerous” occasions with “local residents and community leaders, including First Nations.”

The statement ended with Polak underlining her commitment to “work closely with all parties to ensure concerns are heard and addressed—and to ensure the application of biosolids is always done safely for people and the environment.”

While Jackie Tegart, MLA for Fraser-Nicola acknowledged that various groups have expressed concerns, and assured her constituents that the government was taking them seriously, she, too, was quick to defend the practice.

“Biosolids have been applied at a number of locations in the Nicola Valley—and around the province—since 2002 in accordance with the Organic Matter Recycling Regulation, a safeguard that is designed to protect people and the environment.”

Neither Polak nor Tegart, however, addressed the problem of the smell, and nor did they speak to Shuter’s and Sam’s concerns over the government’s failure to inform and seek consent from First Nations beforehand.

But the Friends of the Nicola Valley and the First Nations bands both hope that the government can be brought to the table for an honest discussion.

“In regards to a moratorium and whether the government is going to agree with that, well, we’ve invited them to support our moratorium, so we’ll see where that goes,” said Sam. “The one thing that’s really important from our perspective is that we the Nicola chiefs realize that this is an issue that isn’t going to go away.”

— André Forget joined the Anglican Journal in 2014 as staff writer and social media lead. He also serves as managing editor of Whether Magazine, and his writing has appeared in The Dalhousie Review, The Winnipeg Review, and the Town Crier.