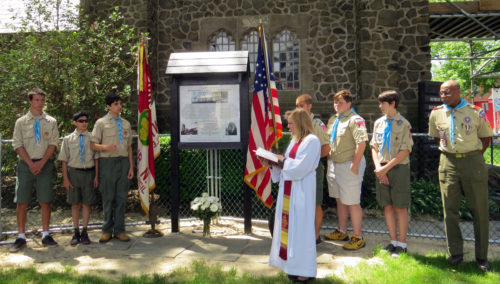 [Episcopal News Service] While celebrating the divine gift of the Holy Spirit to the church on Pentecost Sunday, St. James Episcopal Church in Upper Montclair, New Jersey, also celebrated the human gifts of service and sacrifice as it honored men and women of the U.S. Armed Forces who died serving their country. 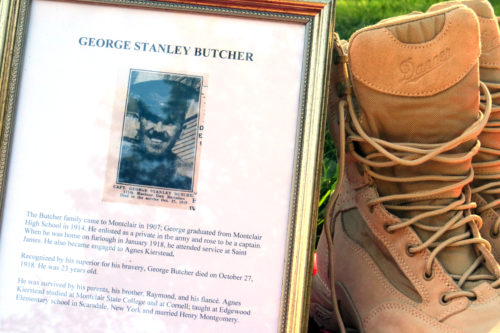 George Stanley Butcher was a parishioner at St. James Episcopal Church in Upper Montclair, New Jersey, who was killed in battle in World War I in 1918 at age 23. He received the Distinguished Service Cross for heroism. Photo: Sharon Sheridan/Episcopal News Service

In particular, the church honored seven parishioners who died during World War I, especially George Stanley Butcher, a former crucifer who posthumously received the Distinguished Service Cross for his heroism.

The church’s bell tower was erected in memory of those who died and in celebration of the safe return of other local World War I soldiers. The tower, currently under repair, was donated by Alexander Luchars, a St. James warden for 15 years, and contains bells inscribed with the names of the parish’s seven deceased soldiers.

The church’s tribute focused on the World War I soldiers, and on Butcher in particular, to bring a human face to war, the Rev. C. Melissa Hall, St. James interim rector, told Episcopal News Service.

Sometimes war is a necessity, she said. “World War II is a perfect example.” There was a “horrible evil” in the world, and people acted against it, said Hall. Her father, Paul, served in World War II, fighting at the Battle of the Bulge and helping to liberate a Nazi concentration camp.

But, she said, “If you talk about war in the abstract, if you don’t make that connection and honor those people and name them, war becomes a lot easier. We’re a country at war, and people don’t even think about it.”

The May 24 Eucharist included the “last roll call” reading of the names of the seven World War I soldiers – a military tradition in which each deceased soldier’s name is said three times – by parishioner 2 Lt. Phillip Russo of the 50th Brigade Combat Team of the Army’s 10th Mountain Division and his childhood friend 1 Lt. Gregory Carnazza of the Weapons Training Battalion of the Marine Corps Installations East. Russo’s father Cole, a Marine Corps veteran and former St. James warden, read a letter written by Butcher’s commanding officer, Maj. Williard E. Tydings, informing Butcher’s parents of his Oct. 27, 1918, death at age 23.

“May God, in his mercy, ease your pain, with the knowledge that only can the finest of men give up their live for others,” Tydings wrote. “It is the wish of myself and the other officers and men who are left that this letter be published that his friends and townspeople may get a glimpse of his noble act.”

In her sermon, Hall interwove the themes of Pentecost and Memorial Day.

“Pentecost inspires the idea of the beginning of something new for humankind, it marks a new creation, a new church and a new life touched by the peace of God,” she said. “And, on the other hand, there’s Memorial Day which is about endings, and remembering the events of the past, and the lives lost in war.

“Pentecost united the peoples of the world with one voice, one mission, one purpose,” she said. “And that purpose was to become the people of God, and to do the work of God. … The disciples are called by one name in the Spirit, and they are all God’s people.

“Memorial Day is about naming as well. It is a national holiday that honors the fallen military that died in the service of this country. And as noble and important as that is, once this day is past, it is easy to forget those men and women who sacrificed themselves during times of wars.

“Today Saint James has taken on the responsibility to put the faces to the names and to tell the stories of the lives of the fallen from World War I, who came from this church,” she said. “These are the stories we must remember if we are truly to honor our war dead.

“War as an abstraction can be a dangerous thing, because it makes it so easy to see it as our only option to conflict,” she said. “I will say the same thing for peace, because peace cannot be done in the abstract. Peace is the outcome of an action. Peace requires at least two people standing face to face.”

She concluded, “Let these lost children of Saint James remind us that war in the abstract is not an option, let their sacrifice make us mindful to follow in the ways of Jesus, and may their lives always guide us to choose love and peace first.”

After the service, the congregation gathered on the church lawn. Phillip Russo read Butcher’s Distinguished Service Cross commendation. Then Hall and the Rev. Audrey Hasselbrook, assistant rector, led a litany commemorating the seven World War I soldiers and those who have died in other wars. A pair of military boots with a photo of each St. James soldier was displayed on red fabric banners hanging from the tower scaffolding and lining the church walkway – inspired, Hall said, by the sea of red ceramic poppies displayed as a World War I memorial outside the Tower of London. 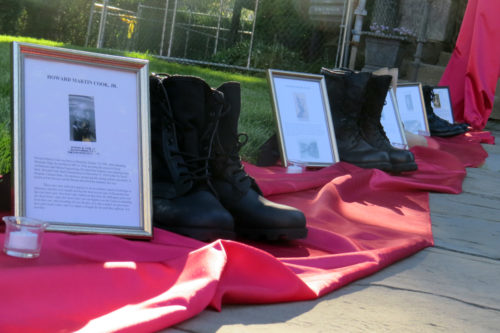 Choir member David Gurniak played taps. Then Hasselbrook dedicated a sign with historic photos and a description of the bell tower’s significance, recently erected as an Eagle Scout project by parishioner C. J. Kaloudis. His Boy Scout Troop 12 meets at the church. The ceremony ended with a tolling of the tower’s bells.

Kaloudis, a high school sophomore who aspires to join the Navy, said he liked how the tower was designed to bring church and community together.

Kaloudis, who recently was confirmed in the Episcopal Diocese of Newark, said he also wanted to do a project to benefit the church as a way of thanking it for hosting his troop and for supporting him through his years in the parish.

Phillip Russo and Carnazza each said they appreciated the chance to participate in the tribute.

Thinking about the soldiers they memorialized as a serviceman himself, Russo said, “It’s just a recognition that all of us are connected. … We’re just continuing their legacy.”

With the St. James Memorial Day tribute, Hall told ENS, “We’re not memorializing war.” Rather, she said, the church is stopping to memorialize those who died serving their country. “We do this because it’s the right thing to do and it’s what we’re called to do.”