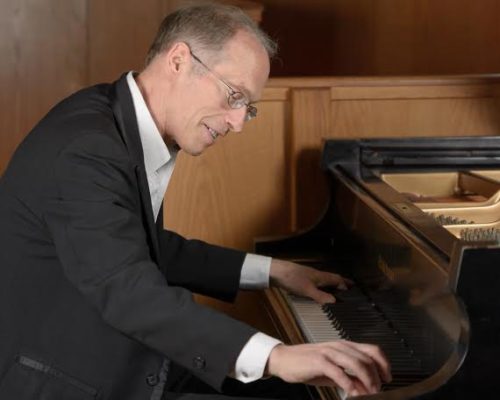 [St. Paul’s Episcopal Church] Dwight Stone, Director of Music Ministries at St. Paul’s Episcopal Church in Walnut Creek, has won first place for performance works in the 2015 Music Teachers’ Association of California Composition Competition with his piece for piano solo, “Eye on the Prize.” He will perform the work and accept the award at the MTAC state convention in San Jose on July 6, where world-renowned artists and teachers give recitals, lectures, presentations, and master classes.

“I am honored, excited and looking forward to presenting this composition to musicians and teachers from all across California,” said Stone. “I was inspired to write it in 2008 when I was in Austria, and I heard virtuoso guitarist Peter Taucher perform with his jazz-avant-garde trio. That style really connected with me, and I wanted to write something for them. ‘Eye on the Prize’ is the pianist’s version of this concept.”

Stone’s compositions reflect his experience in all facets of music, including vocal, choral, brass, orchestra, guitar and piano. An accomplished vocalist and performer on piano, and a conductor, with nearly a dozen recordings to his credit, Stone adds, “It’s especially nice to be recognized and acknowledged as a composer.”

Dwight Stone was born in California into a musical family and grew up in Missoula, Montana. He studied applied voice, piano, organ, composition, orchestration and conducting, along with the required theoretical and musicological aspects of music, obtaining a B. Mus. in voice. While completing his M.A. in composition at CSU Sacramento, he concurrently served as Director of Orchestras at Sacramento City College and Music Director at St. Matthew’s Episcopal Church in North Sacramento.

Stone received a graduate certificate in film scoring from USC and spent 20 years in Los Angeles scoring commercials and documentaries, composing for chorus and various ensembles, conducting, singing and accompanying. He served as organist/choirmaster for St. Martin-in-the-Fields Episcopal Church in Canoga Park. He sang with the LA Jazz Choir, the LA Chamber Choir, the LA Master Chorale, and toured four times with the Roger Wagner Chorale in the U.S. and Orient. He served as Music Director of the Methodist Church in Pacific Palisades, and also of Temple Akiba in Culver City. His album “Reveries for Day and Night” grew out of his encounter with Dutch chromatic harmonica virtuoso Tim Welvaars, as well as the inspiration for the recent album of flute duets, “Amsterdam.” More information is on his web site, www.stonemusic.us , and Facebook page, DwightStoneConcerts.

The Music Teachers’ Association of California, incorporated in 1897, is a professional organization dedicated to the pursuit of excellence in music education. With over 4,700 members, there are more than 67 self-governing, affiliated branches throughout the state—from Humboldt County to San Diego County—which coordinate their own activities as well as participate in state-wide events. More information is at www.mtac.org.