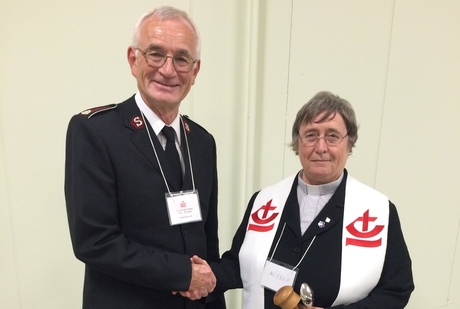 [Anglican Communion News Service] A new chapter of the Rev. Canon Alyson Barnett-Cowan’s lifelong ecumenical engagement has begun with her installation as the new president of the Canadian Council of Churches (CCC) on May 14.

The current interim secretary general of the Anglican Communion and its former director for Unity, Faith and Order, she was unanimously elected to a three-year term as CCC president by the council’s governing board. She succeeds Lt. Col. Jim Champ of the Salvation Army.

A priest of the Anglican Church of Canada, for which she served several years as ecumenical officer, Barnett-Cowan had previously served a term as one of CCC’s vice presidents. She brings with her a wealth of ecumenical experience, having been engaged with various inter-church dialogues and councils of churches at the local, regional, and international level.

“I am delighted and honored to have been chosen for this important voluntary position. It is wonderful to be able to put the experience I’ve gained working for the ecumenical life of the Anglican Communion to use in the service of the Canadian churches,” Barnett-Cowan said of her appointment.

“The CCC is one of the broadest ecumenical bodies in the world, and has much to offer to the Canadian landscape at this time,” she added.

The Canadian Council of Churches is the largest ecumenical body in Canada, representing 25 churches of Anglican, Eastern and Oriental Orthodox, Protestant, and Roman Catholic traditions.

Barnett-Cowan will conclude her short-term appointment as the Anglican Communion’s Interim Secretary General in June.