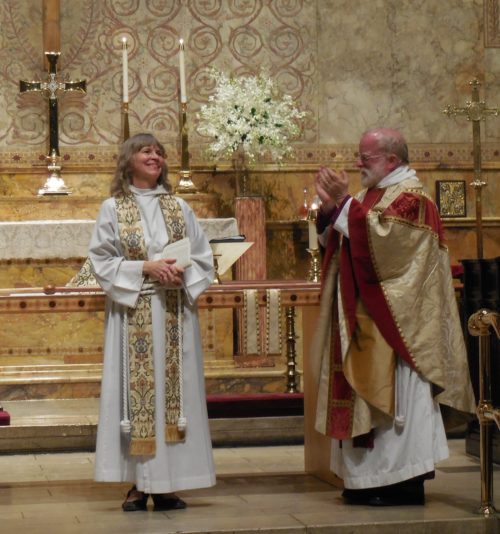 The Rev. Elizabeth G. Maxwell was installed on May13 as the 12th rector of The Church of the Ascension in New York City by the Rt. Rev. Andrew M.L. Dietsche, bishop of the Episcopal Diocese of New York.

On Wednesday, May 13, 2015, The Rev. Elizabeth G. Maxwell was installed as the 12th Rector of The Church of the Ascension in New York City. She is the first woman Rector since the Manhattan church was founded in 1827. The first church was on Canal Street, but was destroyed by fire. The present site at Fifth Avenue and 10th Street was chosen for a new church designed by Richard Upjohn and consecrated on November 5, 1841.

Mother Liz has lived and worked in Manhattan for 25 years, first as Associate Rector of the Church of the Holy Apostles in Chelsea, including Program Director of the Holy Apostles Soup Kitchen, and then as Interim Pastor of St. Michael’s Church on the Upper West Side. She is a graduate of Duke University and Princeton Theological Seminary, and was ordained in the Diocese of Newark in 1983, serving there before coming to the Diocese of New York.

The sanctuary was filled as hundreds gathered in the church for her installation by The Rt. Rev. Andrew M.L. Dietsche, Bishop of the Episcopal Diocese of New York. The spirited procession included the vestry, search committee, church staff, clergy friends and colleagues, and the Ascension choir.

During the “induction” section of the service representatives of the congregation and the clergy of the diocese presented Mother Liz with gifts as symbols of Ascension’s ministries including: a Bible from the Sunday School, a vessel of baptismal water from the Bishop, a clerical stole from the acolytes and lectors, pantry food and tutoring books from Ascension Outreach, a book of prayer for spiritual formation, olive oil for healing, a hymnal companion from the choir, a pineapple as a sign of our “juicy” hospitality and fellowship, blueprints for stewardship of our historic buildings, the canons for ministry in the wider church, a book of sacred poetry for interfaith worship, a Canterbury T-shirt for ministry with the higher educational institutions that surround the church, a statue of St. Fiacre for the care of our gardens, bread and wine from the Altar Guild, a tray and cups symbolizing the church’s water table during the Gay Pride march every June, and a key to the “the church of the open door.” Following the Induction Mother Liz was welcomed as the new Rector and was greeted with thunderous and lengthy applause, after which she thanked everyone. She then introduced her family and extended family, offering special thanks to her daughter Mihret Lucy and their dog Finn.

The sermon was delivered by The Rev. Elizabeth A. Sherman, Rector, St. Francis’ Church, San Francisco and the Gospeller was The Rev. Edwin Chinery, Assisting Priest at Ascension. Jubilant and beautiful music was provided by Dr. Dennis Keene, organist and choir master, conducting the Ascension choir. The service was followed by an exuberant and festive reception in the Parish Hall.

As the first church to be built on Fifth Avenue, Ascension has long held an important and notable role in Lower Manhattan; parishioners have included many prominent New Yorkers who exhibited remarkable social concern early in the church. The church’s history as a leader in progressive causes included establishing the first day nursery for babies and young children of working mothers and several missions and chapels. The parish continues this tradition today offering a neighborhood food pantry, tutoring program, hosting support groups in the church facilities and sponsoring arts and cultural programs. The church is also known for its architectural, artistic and musical heritage, including the painting of “The Ascension of Our Lord” above the main altar by John La Farge (1835-1910). With the addition of The Manton Memorial Organ in 2011 the parish has one of the premier organs in the world and hosts concerts and an annual organ academy.