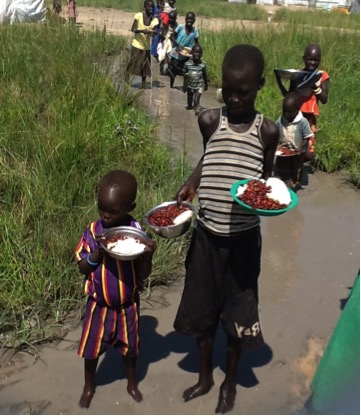 [Episcopal News Service] As the violent conflict in South Sudan continues into its 17th month, the Episcopal Church in the war-ravaged country and its global partners remain steadfast in their commitment to providing immediate relief to the hundreds of thousands of internally displaced people and to the ultimate goal of peace and reconciliation.

“Amid conflict and tribulation, God cannot forget his people regardless of their disobedience,” the Rev. Joseph El-hag Abe Natana, general manager of the Sudanese Development and Relief Agency (SUDRA), told Episcopal News Service as the United Nations reported that more than 300,000 people are without “life-saving” aid in Unity State, along the border between Sudan and South Sudan, after heavy fighting has forced international aid agencies to withdraw.

“God always raises expectations with a message of hope that he will deliver his people. Hence, the humanitarian response, prayers and lobbying by many nations and people for peace, both regionally and internationally, is seen as God’s care, support and intervention,” said Natana, a priest of the Episcopal Church of South Sudan and Sudan.

South Sudan became the world’s newest nation in July 2011, when it seceded from the north in a referendum on independence following almost half a century of civil war.

But a separate conflict erupted in December 2013 after South Sudan President Salva Kiir accused his former deputy Riek Machar of plotting a coup.

While the conflict began from a political dispute within the ruling party, it quickly morphed into tribal warfare between the Dinka, allied primarily with Kiir, and the Nuer with Machar, now a rebel leader.

Despite several attempts at brokering peace between the two leaders, fighting has continued, and more than 1.5 million people remain internally displaced and in desperate need of humanitarian aid. 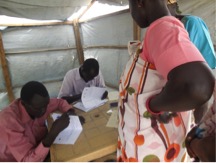 In response to the current crisis, Anglican agencies and affiliated groups are supporting SUDRA, the relief and development arm of the Episcopal Church of South Sudan & Sudan, in providing emergency food to help internally displaced people throughout the south, particularly vulnerable children, women and the elderly. Food supplies include maize, beans, cooking oil, salt and other essentials.

The Anglican Alliance – which connects and strengthens the development, relief and advocacy activities of churches, agencies and networks of the Anglican Communion – recognizes SUDRA as the lead agency and primary partner for the church’s coordinated response to the conflict in South Sudan.

Episcopal Relief & Development is one of SUDRA’s long-standing partners, and continues to support its work in addressing the growing humanitarian crisis in South Sudan, especially in reviewing emergency assessments, planning program activities, preparing reports as well as conducting audits and evaluations.

Nagulan Nesiah, senior program officer for disaster response and risk reduction for Episcopal Relief & Development, said that the Anglican Alliance’s efforts in mobilizing all Anglican partners to support a coordinated process “has improved disaster response efforts by providing a way to consolidate funds donated by various partners to support a comprehensive strategy.”

Episcopal Relief & Development continues to work with SUDRA on strengthening disaster risk preparedness and response. It was among 12 Anglican agencies that together developed the “Pastors and Disasters” toolkit, a resource designed to improve disaster response efforts within the Anglican relief and development community.

“The situation in South Sudan continues to intensify,” said Nesiah. “Episcopal Relief & Development is grateful for the partnership with SUDRA and the Anglican Alliance as it continues to support the church’s ministry to care for underserved communities and people impacted by the ongoing crisis.”

Natana identified SUDRA’s priorities as providing emergency relief food, prayer and counseling, peace building and rehabilitation, and psychosocial support programs to the tens of thousands of internally displaced people. “These people are destitute and vulnerable, they need humanitarian assistance,” especially the children, women and the elderly, he said.

He praised the support and coordinating work of the Anglican Alliance that “has enabled SUDRA to be more effective in providing relief and support to internally displaced people throughout South Sudan.

“Global partnership is paramount because the crisis has not ended,” he said. “More fighting and displacement continues that demands relief delivery, peace building, lobbying and advocacy for a peaceful South Sudan.”

Partnerships also exist through various networks such as the American Friends of the Episcopal Church of Sudan and Hope With South Sudan.

“As brothers and sisters in the body of Christ, we remain committed to supporting the people of the Episcopal Church of South Sudan and Sudan as they work to deliver relief to the suffering South Sudanese, while at the same time working for peace with justice,” said the Rev. Ranjit K. Mathews, officer for global relations and networking for the Domestic and Foreign Missionary Society. “There are a number of strong diocesan relationships between The Episcopal Church and the ECSSS and they will continue to be a place where information is shared, and more importantly where prayer and solidarity is offered.”

AFRECS is providing emergency relief to several Sudanese bishops whose displacement from their dioceses has resulted in their relocation, both within South Sudan and to neighboring countries, “leaving them with virtually no resources with which to support themselves and their families or to extend pastoral care to their dispersed congregations and clergy,” Richard Parkins, executive director of AFRECS, told ENS.

While the security situation in Juba, the nation’s capital, is relatively stable, border regions such as the oil-rich Upper Nile and Kadugli are heavily impacted by conflict, as well as the destabilizing efforts of the Khartoum government in the north.

AFRECS has been helping to fund the work of Bishop Andudu Elnail as he recruits and trains pastors in the Diocese of Kadugli “where the people of the Nuba Mountains continue to live in fear because of Khartoum’s ongoing assault on the Nuba people,” Parkins said.

A pilot project of peace building in Bor (Upper Nile), a region that has experienced some of the most painful suffering resulting from intertribal conflict, will begin in late May. The project is a collaboration between the Anglican Alliance, U.K. and U.S. church partners and the Justice, Peace and Reconciliation Commission of the Episcopal Church of South Sudan and Sudan.

AFRECS, along with other U.S. partners, also is helping to support peace and reconciliation initiatives in the Kakuma Refugee Camp in Kenya, home to thousands of refugees who have the same tribal identities of those who fight each other in South Sudan, Parkins explained. “These efforts are designed to test the means of bringing warring factions together with the hope that reconciliation formed in the camp will provide a model for what might be accomplished in South Sudan when peace initiatives can be realistically carried out,” he said.

The South Sudan Council of Churches, an ecumenical movement that brings together the country’s various Christian denominations, has pressed for a place at the negotiating table but found its pleas for a ceasefire and an end to the suffering largely ignored, Parkins explained. Meanwhile, AFRECS and other partners in the United States and the United Kingdom “continue to encourage peacemaking efforts as a means of bringing hope to a war-weary nation where thousands are suffering and held hostage to the intransigence of the government leaders and their rebel adversaries.”

One consequence of a decades-long civil war between the north and south followed by an internal conflict fueled by political differences “has been the emergence of a culture of violence that is not tied to the tribal/ethnic war that has occupied so many parts of South Sudan, but which results in violent expressions of revenge and retaliation among other tribes and subtribes,” he added. “This proliferation of violence could seriously frustrate future peacemaking efforts. This situation also makes the end of fighting all the more urgent.”