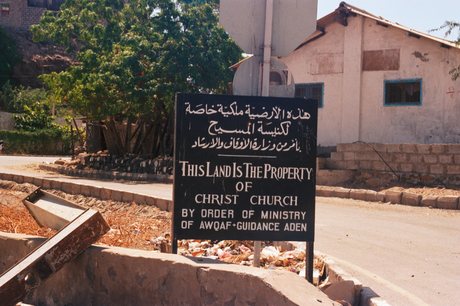 [The Anglican Diocese of Cyprus and the Gulf] The Rt. Rev. Michael Lewis, bishop of Cyprus and the Gulf (The Episcopal Church in Jerusalem & The Middle East), has said that the situation in Aden, Yemen, remains very difficult but that staff of the clinic associated with Christ Church were safe despite property damage due to blast waves from shelling in the area.

“As of today [May 12] the situation in Aden is that all the windows of Christ Church, its associated clinic, and the guesthouse have been blown out as a result of blast waves from sustained shelling on the mountain that dominates our compound in Tawahi. But we are told that all our staff are safe so far, and for that we thank God.

“The general state of Aden is terrible: lack of fuel means lack of electricity, and telecommunications and even basic movement around the large city have become hugely difficult. Food is limited, and money to buy it even more so.

“Our administrator is very thankful for the many prayers that he knows have been made for him, for all who work at Ras Morbat, and for the people of Aden and the Yemen as a whole, a country sorely abused by those with the power, if they chose to use, to promote the common good to the glory of God.”