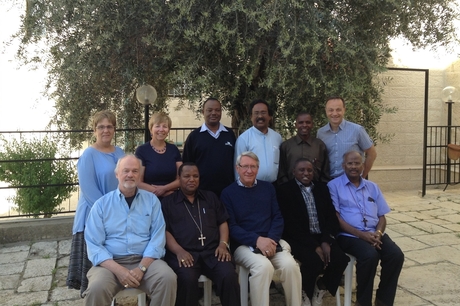 [Anglican Communion News Service] Five Anglican Communion companion dioceses on four continents agreed at a recent meeting in Jerusalem to expand collaboration in their ongoing partnership journey, with a focus on clergy training and communication.

They came away rejoicing in their partnership in the Gospel, agreeing that their journey was energizing mission in all of their dioceses.

Drawing inspiration from the Anglican Communion’s “Continuing Indaba” program, the group’s journey began in 2014 when Bishop Gnanamuthu Paul Vasanthakumar of Trichy-Tanjore invited Bishop Timothy Stevens of his companion Diocese of Leicester to come to India. Also invited were the bishops of Leicester’s companion dioceses, the Rt. Rev. Isaiah Chambala of Kiteto and the Rt. Rev. Stanley Elilekia Hotay of Mount Kilimanjaro. Bishop John Smylie of Wyoming, which shares a companion relationship with the Diocese of Kiteto, completed the circle.

Through the experience, the five bishops found a common sense of mission and decided to embark on a pilgrimage of strengthening relationships and learning about life and mission in one another’s contexts.

Transforming perceptions
Since the initial visit, both lay and ordained people from the five dioceses have continued the journey, gaining not only insights into the other dioceses, but also a different perspective on their own – new perspectives that are transforming their dioceses’ ministries.

One such example is the way that the Diocese of Leicester has made cross-cultural encounters to Trichy-Tanjore and Tanzania a core part of new clergy training.

“When new clergy stand in different contexts where Christians are a minority or where they are facing different kinds of challenges they become more conscious of the particular pressures faced by Christians in their own parishes,” said Canon Mike Harrison, who has taken part in several visits. “It gives us insight as well as inspiration, courage and hope, and encourages us to proclaim the Gospel in our context.”

During their Jerusalem meeting, as the group visited the holy sites they reflected on interreligious tensions under the heading of “blessedness and conflict” and on ways to “model difference without division” within the Anglican Communion.

“I hope our meeting of five dioceses, representing four continents and various theological viewpoints, may be an example for the larger Anglican Communion about how, when centered upon Christ, we are able to find the space and trust to be with one another in authentic and honest conversation,” said Smylie.

New energy for mission
Practical outcomes underlined the bishops’ commitment to taking their conversations a step further. In a statement from the meeting, they indicate concrete plans for the ongoing partnership with the aim of furthering proclamation of the Gospel in all five dioceses.

Their plans include a particular focus on the equipping of ordained and lay leaders, not only in terms of study trips but in developing the training programs of the respective dioceses.

“The bishops resolve to focus on the training and development of ministers and ministry … via both bilateral and multilateral work together,” says the statement, outlining in particular deeper cooperation between the Tanzanian dioceses of Kiteto and Mount Kilimanjaro and the South Indian Diocese of Trichy-Tanjore.

Future meetings of the companion dioceses will focus on a particular theme. The Diocese of Leicester will host the next meeting in 2016 and the Diocese of Wyoming in 2017.

The bishops also decided to establish a communications hub in the Diocese of Wyoming to facilitate better interaction between the dioceses.

The Rev. Canon Phil Groves, who facilitates Continuing Indaba from the Anglican Communion Office and who served on the Diocese of Leicester world mission group for 10 years, welcomed the developments.

“When Anglicans journey together in honest conversation they find new energy for mission in their own context. This is the aim of Continuing Indaba,” he said.