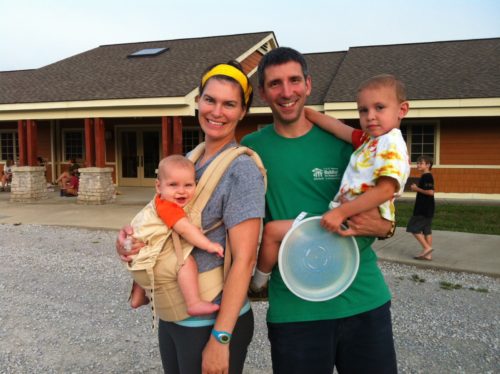 [Church of the Holy Communion] It wasn’t immediately after Ben Badgett proposed to Kendall Terrett that she asked him to join the Peace Corps, but “it might have been the same weekend.” They both said yes, and that’s how they ended up in Madagascar.

Before Madagascar, there was Memphis. When Father Ben was nine, his father’s job brought the family to Memphis, and he lived here until he was 18 and left for college at Western Kentucky University in Bowling Green. In some ways, the Memphis he’s returning to is not completely unfamiliar, but as he puts it, “I knew it from a youth’s perspective, a child’s perspective. It is a much different city to me now than it was then.” That newness is something he’s looking forward to exploring – the city itself and its cultural diversity.

But first, Madagascar. Father Ben and Kendall learned French, but as soon as they landed in Madagascar, they found themselves immersed in the language and culture of its indigenous people – Malagasy – not its colonists. They spent a year and a half in the rural village of Andrambovato, where Kendall worked with a women’s organization raising AIDS awareness. They led a health and sanitation awareness program, building 13 latrines in a village which once had none. They worked with an NGO on an ecotourism assessment, building trails and teaching English, composting and guiding.

“It was a very secular experience in the sense that our focus was being a bridge of cultures.” Ben and Kendall, as representatives of the Peace Corps, were not there as missionaries, but, he says, “the neat thing was that Christianity was there.”

A Lutheran church was the smallest of three in the village, and “every Sunday we’d hear them singing the Doxology in Malagasy.

“That was church for us.”

Ben met Kendall in school. Though brought up Episcopalian, during his undergraduate years, he’d been active in the Baptist campus ministry. Kendall, one of his residents when he worked as an RA, invited him back to the Episcopal Church through campus ministry, and that’s where he found his individual faith and learning coming together with the idea of communal faith and worship.

“I felt a strong call to working in the church” from as young as 16 years old. After graduation, Ben worked for a year as an outdoor and environmental educator at the Mountain Trail Outdoor School at Kanuga Conference Center in North Carolina, then for a year as a youth and young adult minister at Trinity Episcopal in Owensboro, Kentucky.

Marriage and Madagascar were next, and after a discernment internship at Christ Church Cathedral in Louisville, Ben and Kendall began studies at Virginia Theological Seminary, graduating in 2012.

Following that, Ben served as assistant rector and then priest-in-charge at Christ Episcopal Church in Bowling Green, and as Episcopal Campus Ministry chaplain at his alma mater, WKU. In January 2013, Kendall was named Director of Youth Programs and Young Adult Ministry for the Diocese of Kentucky.

Nearly eight years after Madagascar, Ben and Kendall have followed his calling to Holy Communion, moving here with their sons, four-year-old Edward and 16-month-old Keenan, and Barnabas, a five-month-old half Australian shepherd, half chocolate lab puppy. Father Ben’s last Sunday at Christ Church was April 12; May 10 was his first Sunday at Holy Communion; he joined us a week before that for May 1-3’s Sacred Arts Festival.

Father Ben will oversee Holy Communion’s Christian formation department, including supervising the work of our youth and children’s ministers, and he will oversee the pastoral care teams, as well as participating fully in the preaching, teaching, sacramental and pastoral ministries shared by the Reverend Sandy Webb, Priest-in-Charge; the Reverend Hester Mathes, Curate; and the Reverend Randy McCloy, Deacon.