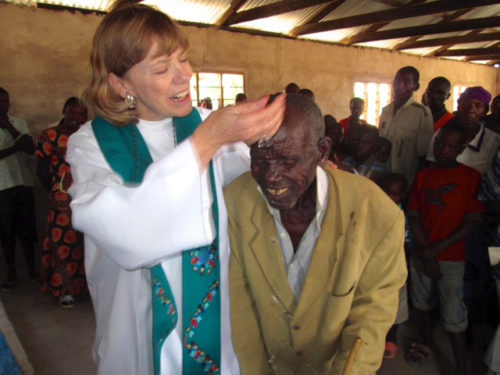 The Rev. Sandra McCann baptizes an elderly member of St. Peter’s Anglican Church in Chikola, Tanzania, during one of her parish visits in the Diocese of Central Tanganyika.

[Episcopal News Service] As a child, the Rev. Sandra McCann dreamed of someday going to Africa. But she never imagined it would become her home, her ministry and her entire life for 12 years.

When Sandy and her husband Martin reached their mid-50s, they made the audacious decision to give up their successful medical careers in radiology and pathology, sell their home and move to Africa as Episcopal Church missionaries. Their move was delayed for three years and in that time Sandy graduated from Virginia Theological Seminary with a Master of Divinity degree and was ordained as an Episcopal priest.

After an “internship” year in Maseno, Kenya, where they worked alongside fellow Episcopal missionaries Gerry and Nancy Hardison, the McCanns moved to Dodoma, Tanzania’s capital city, and have spent the past decade teaching and healing and living in a community far removed from their former lives in Columbus, Georgia. The experience has changed and expanded their worldview forever, they say.

With support and encouragement from the Episcopal Church’s Mission Personnel Office, and at the invitation of the late Bishop Mdimi Mhogolo of the Diocese of Central Tanganyika, Sandy taught at Msalato Theological College and eventually took up the position of communications director as well as serving as college chaplain. 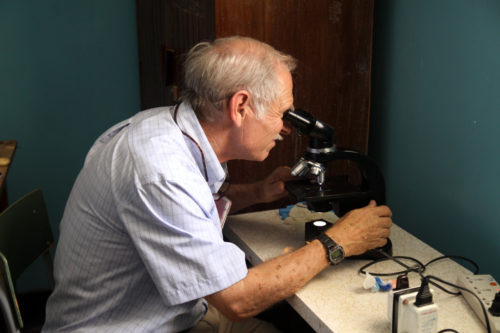 Martin set up a pathology laboratory where diseases could be detected through the use of a variety of investigative techniques, a service that has grown steadily over the past 10 years and was previously nonexistent in the central part of Tanzania. Today, the clinic receives specimens from local government hospitals in Dodoma as well as several mission hospitals.

“The laboratory has brought a new dimension to the healthcare system here,” Martin told ENS. “Physicians, instead of going from symptoms to treatment, are expanding their diagnostic capabilities and evidence-based care. Although there are still great challenges in treatment options, patients are better off.”

Over the years, through generous donations, Martin has been able to replace and upgrade equipment and his staff of one assistant has grown to three, one with a degree in histopathology.

Martin has concentrated his efforts on fine-needle aspiration, a simple procedure for establishing a swift diagnosis that he feels has a vital role to play in resource-poor countries. In 2014, he completed more than 1,200 fine needle aspiration biopsies and 2,200 histopathology cases.

Now in their early 70s, the McCanns have decided 2015 will be their last year in Tanzania, a difficult decision for them, but one that has been made easier by the successful conclusion to an endowment for Msalato Theological College to provide for student sponsorships and faculty salaries.

But before they leave, they are eager to ensure that Martin’s pathology practice will be continued and are urgently seeking a pathologist (or two) to replace him.

[Anyone interested in working as a pathologist in Dodoma should contact the Rev. David Copley, mission personnel officer for the Domestic and Foreign Missionary Society, at dcopley@episcopalchurch.org.] 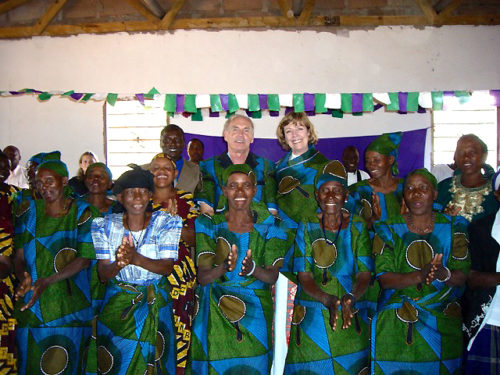 The McCanns are made honorary members of St. Paul’s Women’s Choir in Mvumi Makula, during a parish visit in the Diocese of Central Tanganyika.

Crossing cultural boundaries, building partnerships and engaging God’s mission locally and globally are at the very heart of The Episcopal Church’s missionary program, which is administered by the Domestic and Foreign Missionary Society and currently sponsors and supports 47 adult missionaries. Doctors, nurses, teachers, accountants, agriculturalists, computer technicians, administrators, theologians, and communicators are among their many roles.

Missionaries are lay and ordained, young and old, and serve as “representatives of our community who cross cultural boundaries to participate in the mission of God that our brothers and sisters in other parts of the Anglican Communion feel called to respond to,” says Copley, mission personnel officer for the Domestic and Foreign Missionary Society.

It is difficult “to quantify the success of our missionaries because the basic premise is always to strengthen relationships with our partners.” Some of the greatest success stories can be found “in the programs that continue when the missionary presence ends,” Copley added, hence the importance of finding a replacement for Martin to ensure that his pathology practice can continue to serve those in need in central Tanzania.

The recently released Report to the Church details the work of the Domestic and Foreign Missionary Society in coordinating and supporting Episcopal Church missionaries serving throughout the world.

“The Episcopal Church supports many forms of mission service which include our young adults undertaking a year of service with the Young Adult Service Corps (YASC), older adults on one-year assignments and special short-term projects of less than a year as well as longer-term missionaries. They all have their place in the bigger picture of global mission engagement and all have their merits,” said Copley.

“Long-term missionaries such as the McCanns gain unique insights into the life, culture and faith of the partners they are walking alongside which cannot be gained on shorter-term assignments,” Copley added. “The McCanns have been the physical embodiment of the relationship that The Episcopal Church nurtures in Tanzania and throughout the church. The relationships that they develop with our Anglican partners helps strengthen the Anglican Communion and helps bring the Body of Christ closer together.

“Martin and Sandy have given a significant part of their lives in the service of others and we are grateful for their ministry.”

Martin became interested in becoming a missionary after serving on short-term medical mission trips with various denominations to Haiti and South America. Then with World Medical Mission, Martin served as a pathologist in Kijabe, Kenya, receiving specimens and returning diagnoses from some 42 hospitals and clinics. The laboratory he has established at the Anglican Diocesan Medical Center in Dodoma follows the same model.

For Sandy, installed as a canon of the Diocese of Central Tanganyika in May 2012 in honor of her ministry there, the missionary seeds were planted early in life. “My mother was a Christian who was always doing for others … from sharing her garden, her table, her car, to her hair-cutting skills,” she said. “Wasting anything was a sin. Making do was an art. Our clothes were mended, washed, ironed and passed on when we outgrew them. Whatever we put on our plates had to be eaten, because ‘there are children starving in Africa!’ It was in this atmosphere that I was raised up.”

The McCanns say they feel privileged to have been called to this work, describing it as interesting, exciting, as well as challenging, learning to live in a completely different culture. 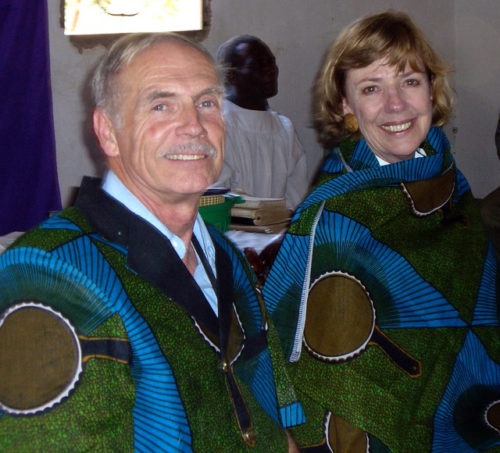 The McCanns are made honorary members of St. Paul’s Women’s Choir in Mvumi Makula, during a parish visit in the Diocese of Central Tanganyika.

The best part, however, “has been to meet and get to know Christians who remain faithful in very trying and frustrating circumstances. This has certainly opened our eyes to the difference between a first-world problem and a problem of developing countries,” they say. “Listening to the gospel in an entirely new context is transforming. While in the West we practically skip over curses and ghosts and demons, this is not the case here. The liminal space is very thin between the spiritual and physical worlds. Worshiping and studying with East African Christians has opened our minds to other ways of worshiping and to other ways of understanding God.”

There is a great freedom in being a missionary, Sandy said, being removed from the social pressures in the United States. “There is no keeping up with the Joneses, not that that was ever a priority with us,” she said. “When we would have the students to our house in Kenya, everyone had to bring their own plate – and we found it was a lot of fun squeezing into our small cottage and making do. At Msalato we borrow the one cake pan or the one meat grinder or the one ‘real’ coffee pot. I like living in community like this. … I am old fashioned and love using things up and making do and being creative with what I have, so this suits me.”

The greatest challenges, she said, have been the abject poverty and lack of the most basic resources, especially clean water; bureaucracy and widespread corruption and dishonesty; the fear of authority and of reporting abuses or inappropriate behavior; a prevalent belief in witchcraft, even by Christians and the well-educated; and poor infrastructure.

The recent resurgence of the killing of albino children due to the witch doctors promising that their body parts, hair, and blood will bring fortune in love and wealth is particularly disturbing, she said. “It is shocking how prevalent and strong the primitive belief systems remain in parts of Tanzania,” she said.

Despite the “extreme difficulty and frustration of living honestly in a corrupt society,” the McCanns say that as a result of the experiences of the past 12 years, “we are less judgmental, more patient and more aware of the monumental work it will take to get Tanzania to the stage of economic independence.”

They also have made countless friends and have grown “to admire the Tanzanian people very much. They have shown us that the possibility of deep joy in the midst of daily suffering is real. As the late Bishop Mhogolo once said about being in the village parishes: The people are poor, often they are hungry, but they are still dancing and praising the Lord. It’s true and a beautiful thing to behold.”

Sandy says she has seen God’s hand in everything they have done, “but often only through the ‘retrospectoscope.’ Now we are again taking God’s hand and walking out into the dark trusting him for our next work.”